“You hear about old master craftsmen, but in many ways, today’s craftsmen are held to a higher standard,” said terrazzo contractor John Blakley, after completing a combination of restoration and new construction work that renovated an abandoned community landmark for a new purpose. “Old terrazzo people wouldn’t be happy to hear that, but the people who built this place have been gone for years now.”

Indianapolis’ long-abandoned, 100-year-old St. Vincent’s Hospital was reconfigured in 2013 as Ivy Tech Community College’s new student center. A large portion of the original hospital structure was demolished, but century-old cementitious terrazzo filling the original main entry, notably a monumental stairway, was restored and incorporated into the structure. New epoxy terrazzo in complementary colors was installed in the common areas of the new sections of the completed 211,650-square-foot facility.

“The project was a rare opportunity to incorporate terrazzo that old into new construction,”said Blakley, of the Blakley Corporation of Indianapolis. “We didn’t redo the original terrazzo; we brought back what was there.”

Ivy Tech’s $50 million transformation of the building, founded on the most durable elements of the old hospital, brought revitalization of the city’s urban center through the conservation of a treasured community landmark and its still-valuable historic floors. The highly functional convergence of preservation and new construction handed down the history, character and value of existing materials, beautifully and durably. 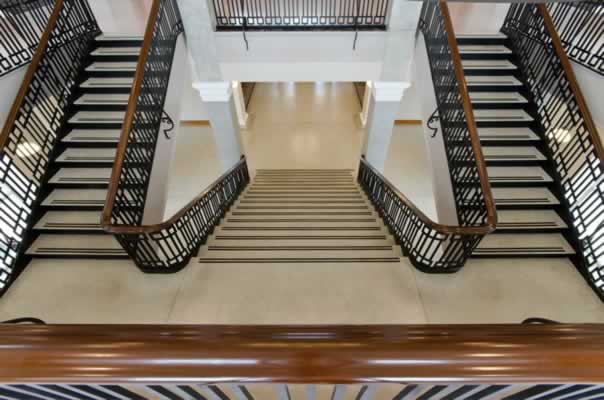 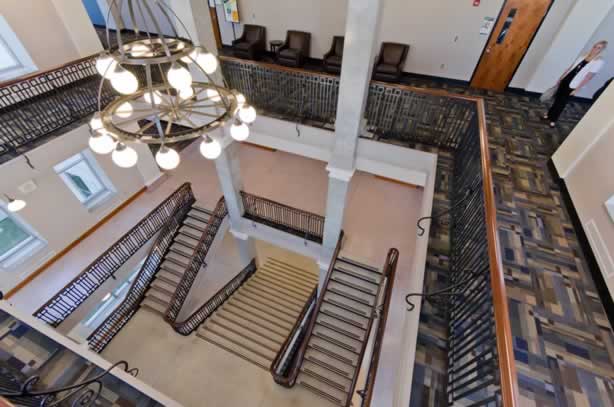 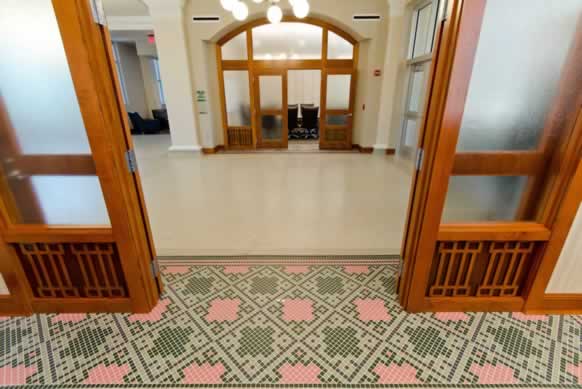 The old St. Vincent’s Hospital had stood abandoned for 10 years when the space-strapped community college saw its value and potential to meet a need. Ivy Tech’s enrollment had quadrupled in recent years; the school now serves over 25,000 students. The 250-bed hospital on the north bank of Fall Creek, on the north side of downtown Indianapolis, had served hundreds of thousands of patients in its 60 years of operations. Originally founded in 1881 by the Daughters of Charity, the hospital’s Fall Creek location was dedicated in 1913. Put together with mortar from sand from Fall Creek, the building’s original 1911 cornerstone was still standing in its southeast corner. 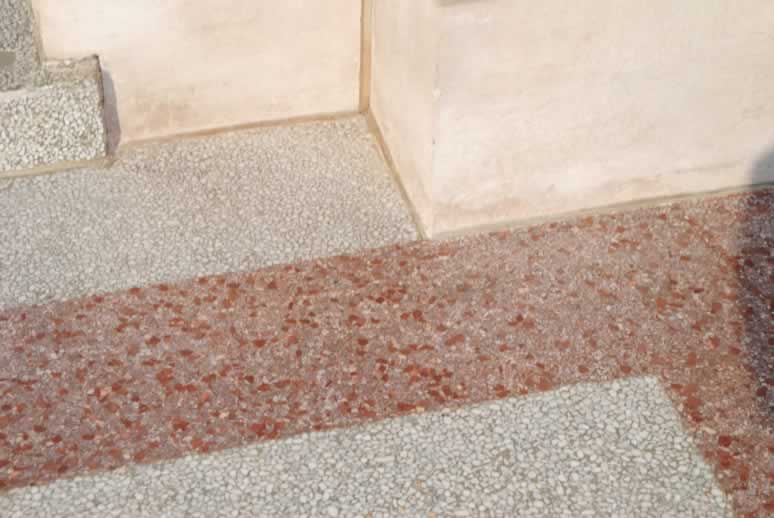 The structure’s rebirth was completed exactly 100 years later, as the Illinois Fall Creek Center, the academic and social hub for Ivy Tech’s main campus. The role of the terrazzo contractor in that accomplishment was noted the same year by the National Terrazzo & Mosaic Association.

Most interesting about this project to architect Kevin Shelley, AIA, LEED AP, principal at Schmidt Associates in Indianapolis, was the opportunity to save the historic building and put it back to work for the community in a new way. Preserving its historical value also translated to cost savings over demolition. 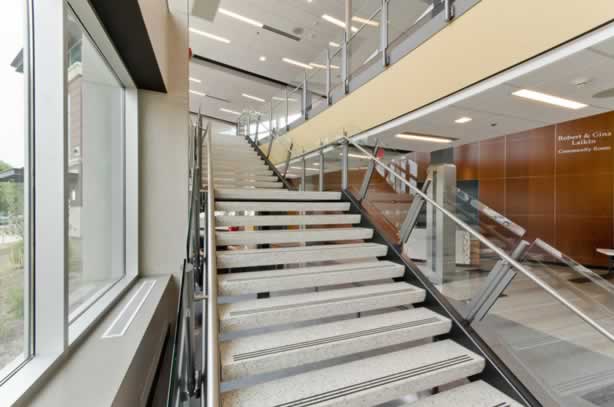 “The historic monumental stairway in terrazzo—and I have no idea how they did that— stood the test of time,” said Shelley. “There was some cracking and discoloration, but we shined it up and it was as functional and beautiful as the day it was installed.”

One major challenge in the project was the inconsistency of colors in the original terrazzo. While the variations were mostly unnoticeable to the eye, samples laid down to compare would match in one place but not in others.

“Today you expect to set down a sample and for it to blend in anywhere. We found we couldn’t do that with an old floor,” Blakley explained.

The renovated terrazzo looks old, Blakley noted, in that “the colors aren’t in today’s color palettes. It’s a look that’s not often done today.” The classic, retro design unifies old and new throughout the facility.

“While you can’t bring it back to higher standards than what it was built to, you can bring it back to what it was like when first done,” Blakley said, adding that the old terrazzo probably looked “even better than when it was first installed,” and that the blotchiness gives the floor its well-earned character.

“We discovered there’s no reason to be afraid to celebrate historic terrazzo as it is,” Shelley said. “We let its natural patina be; we highlighted it.”

The façade of the original structure with its total of about 5,200 square feet of terrazzo was restored in four months. Along with the treads of the monumental stairway, the original flooring, base, and columns in the main entry required repair and infill to replace damaged areas. Most of the old-fashioned bull-nosing on the stair treads had broken off and had to be reconstructed. Work included refurbishing the back service stairway and a severely damaged exterior covered porch, which had been routed and patched over the years, at the main entry.

New columns were replicated from the originals to replace those missing or damaged. All the old terrazzo was reground and polished and abrasive strips were added to the stairs. The original iron railing on the entry stairs and the two original cast iron light fixtures were also restored. The original cornerstone also still stands.

The use of terrazzo and its longevity in the existing building made terrazzo a natural choice for the new addition’s entry, stairway, and cafeteria dining and serving areas, an installation of a total of 17,000 square feet. New epoxy terrazzo was “the right material for the function in large common areas, and it met our needs with color, patterns, and inlays,” said Shelley, noting that better color consistency is possible with epoxy terrazzo than with the traditional cementitious.

The sleek, crisp lines of the new stairway’s structural terrazzo treads, with painted steel stringers and a glass-and-steel handrail system, offers a distinctly modern response to the restored monumental stair. The radial pattern of the thin-set terrazzo floor in the commons and cafeteria areas draws its inspiration from the geometric curve of the building’s northern curtain wall façade. Short ribbons of accent color along the radial lines, inspired by a similar element on the new limestone exterior, bring visual movement to the new interior spaces.

Shelley’s firm, which specializes in designs for schools, specifies terrazzo regularly for large spaces, a choice confirmed in the results of this project.

“Terrazzo allows for a design of patterns to flow from space to space that you can’t do with other materials, and it is a hard surface with a high level of durability,” he explained. “Your imagination is almost the limit of what you can do with it.” 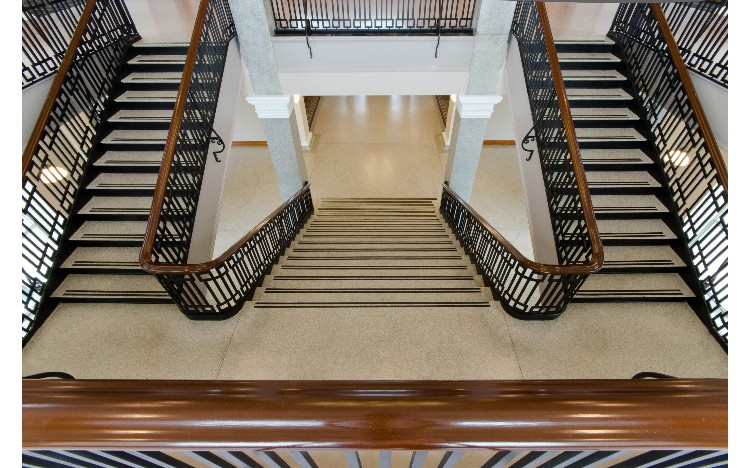 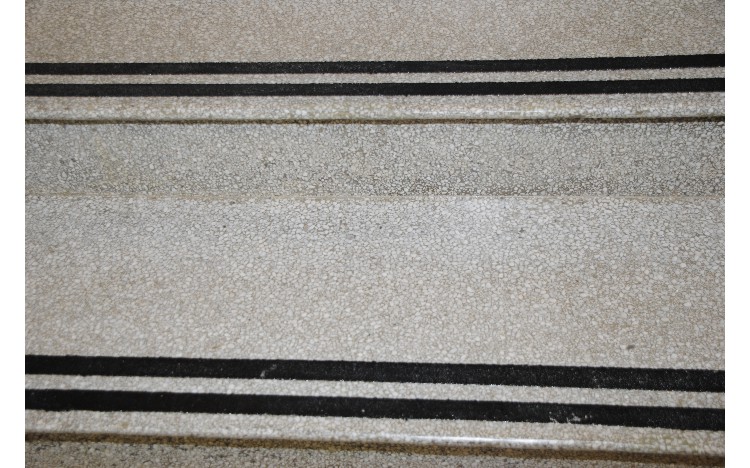 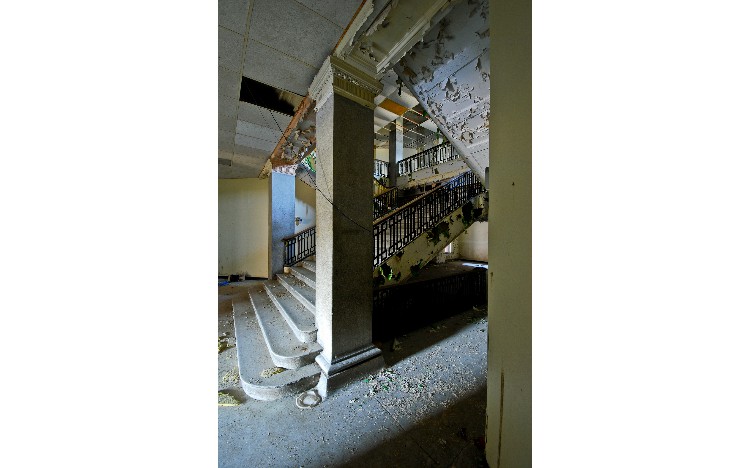 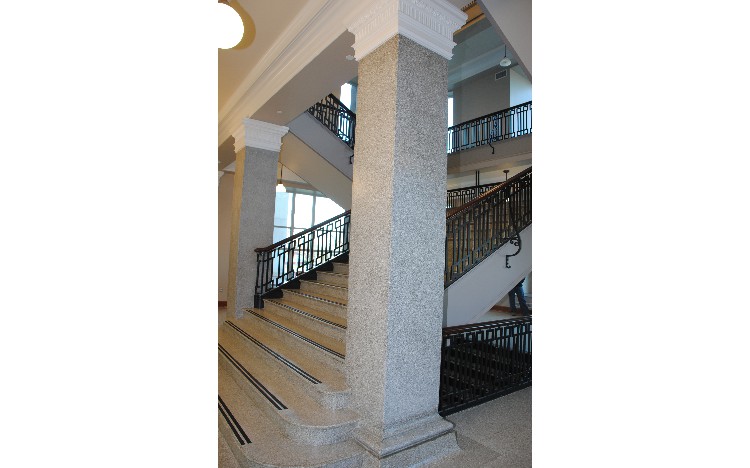 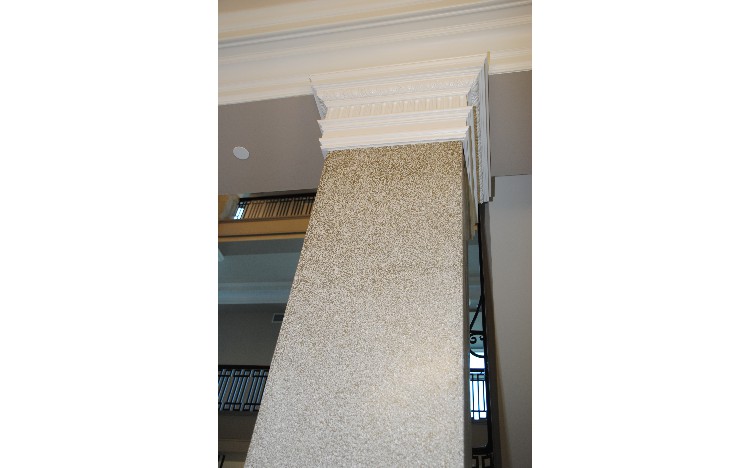 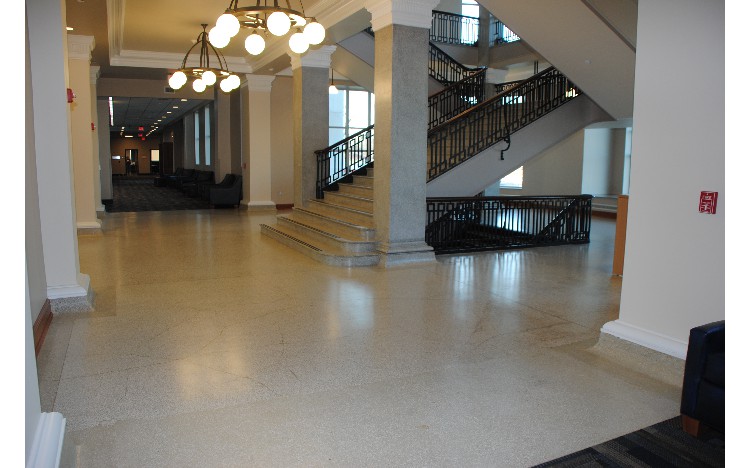 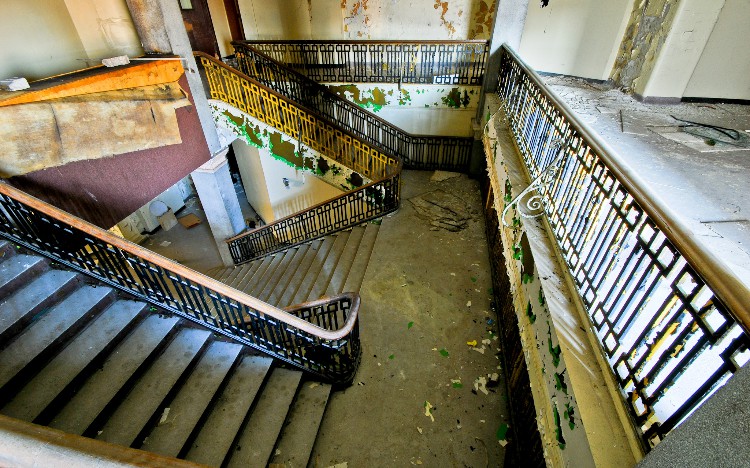 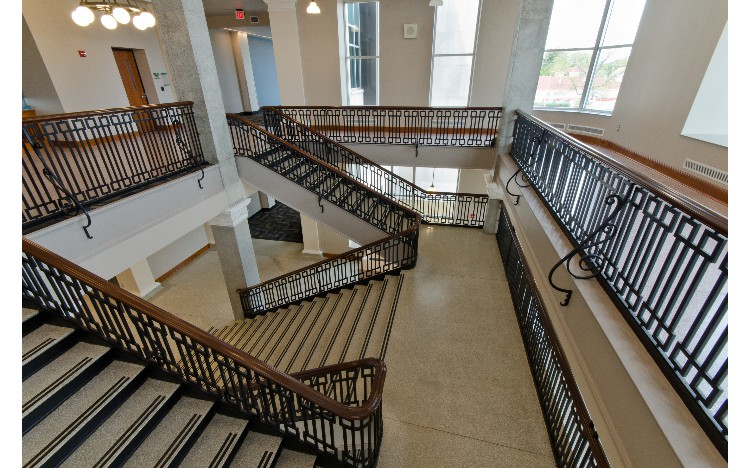 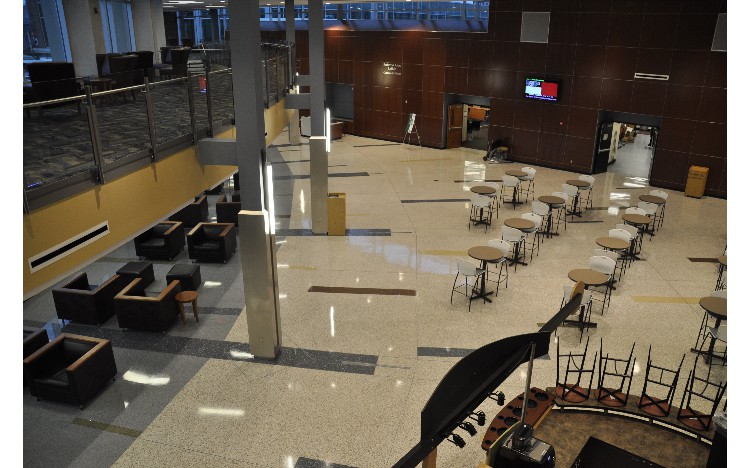 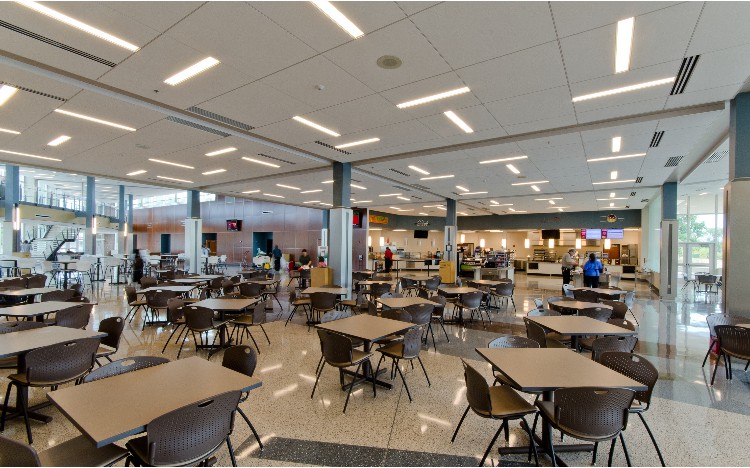 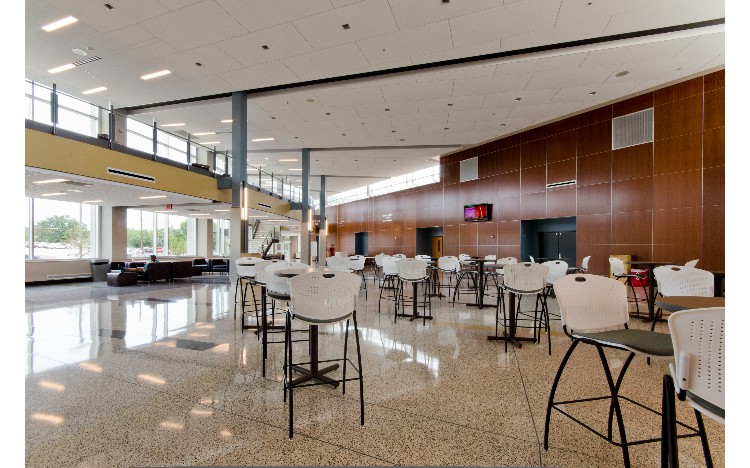