The old Charleston International Airport terminal was built in the 1980s, long before electronic check-in or even wheeled luggage. The airport’s look and functionality have not changed much since then, while its traffic volume has grown at twice the industry average. By 2016, it had already reached the numbers projected for 2025.

Charleston International’s redevelopment and improvement program responded to growing demands on its infrastructure by radically improving the existing structure’s functionality and design.

At the same time, the project managed to maintain airline operations and ensure safety while accommodating 15,000 passengers per day, all within a limited budget.

The completion of the renovated and expanded airport was celebrated in October 2016, without a single canceled flight or any slowing of growth, and with further expansion of the airport still on course.

As it was, work phases were tightly segmented in the busy concourse; workers shared space with airport employees and other trades as well as travelers. Foot traffic was continually rerouted, and gate numbers reshuffled. “If floor demolition had been added simultaneously, it would have exponentially drawn out and complicated the work schedule further,” said Mr. Wingo.

The environmental impact of the waste that removing the brick pavers and mortar would have generated represents another unique advantage. “Debris was kept out of landfills, and the dust that would have been kicked up was kept out of active passenger areas,” Mr. Smith noted.

Charleston County Aviation Authority opted against pursuing LEED certification on the airport redevelopment project because of the $1 million or more that managing certification would have added to their expenses. Fentress took the initiative, however, to include LEED language for terrazzo in their specs, including low VOC and recycled content requirements. 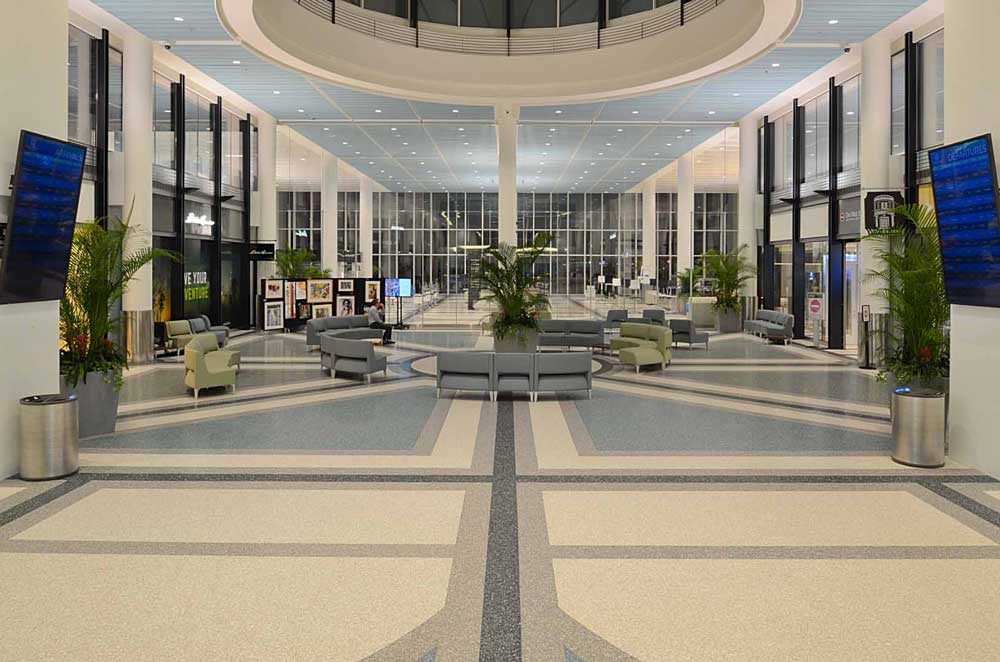 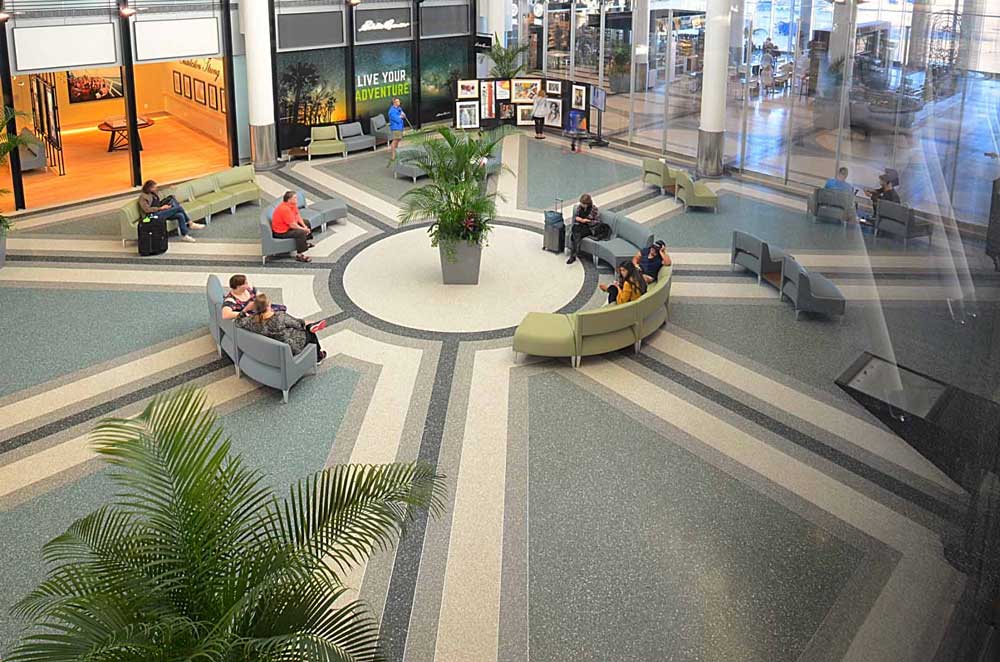 Charleston County Aviation Authority worked closely with the Fentress team to recreate the facility’s functionality and aesthetics, starting with the floor. About 70 percent of the floor was brown clay brick pavers; the rest was carpet. The overall effect was dark and dingy. The Aviation Authority wanted to change more than just the appearance of their floors.

Mr. Smith recounts, “The first thing we heard from the client was ‘No more clickety-clacks!’” Meeting that day in the airport’s board room, they could hear each clickety-clack of innumerable luggage wheels passing over the bricks out in the concourse. 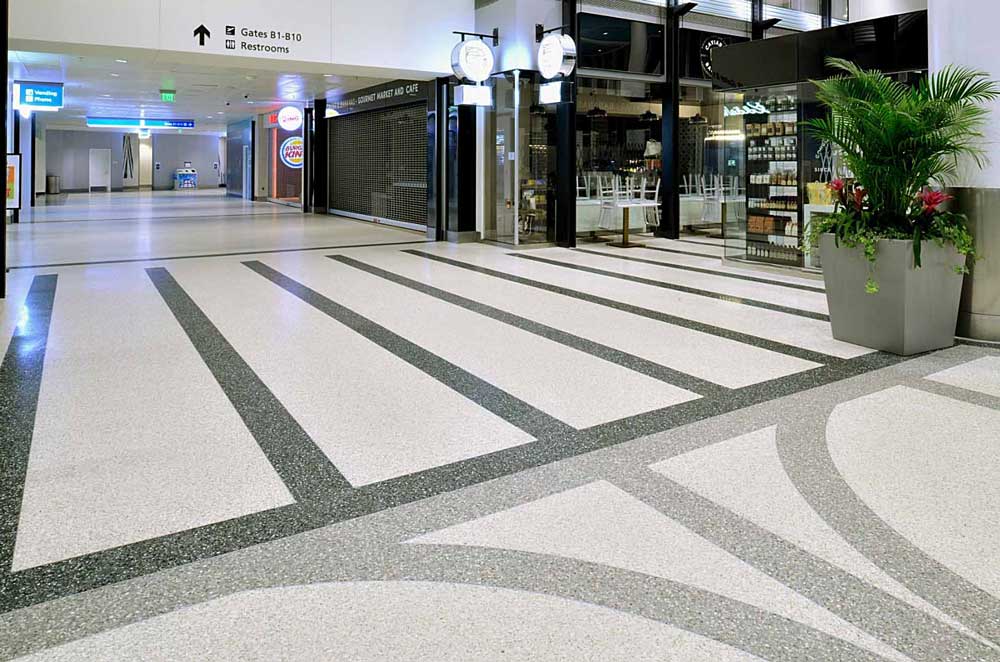 “We were pressed up against the ropes to keep terrazzo in the project,” Mr. Smith explained. Then the team discovered that terrazzo can be installed over several different floor systems under the right conditions and that their project fit those parameters.

“Being able to do that is what opened the door, made the project viable within budget,” Mr. Smith said. “It meant a ton of cost savings.”

The NTMA’s technical advisor, Gary French, worked with the project team and made recommendations for floor prep, Mr. Smith said.

The architecture team met that client demand with terrazzo as a seamless surface; additional advantages became evident in its design flexibility in giving the airport a complete makeover.

“We pushed to enhance the design and colors, to bounce the natural light and keep it bright,” Mr. Smith said.

The initial expectation was that the old brick floor would have to be demolished and removed, including two inches of substrate, and then built back up again. It soon became apparent that after the cost of demolition, a terrazzo installation would not be possible within the established budget. Removing the pavers would take too much time, create too much mess, and cost too much.

Approximately 125,000 square feet of epoxy thin-set terrazzo was applied, some in new construction areas, such as the security checkpoint and a portion of Concourse B. Primarily, terrazzo was installed in existing structures over concrete slabs or brick pavers in the main circulation areas: ticketing hall, central hall, baggage claim, and restrooms. 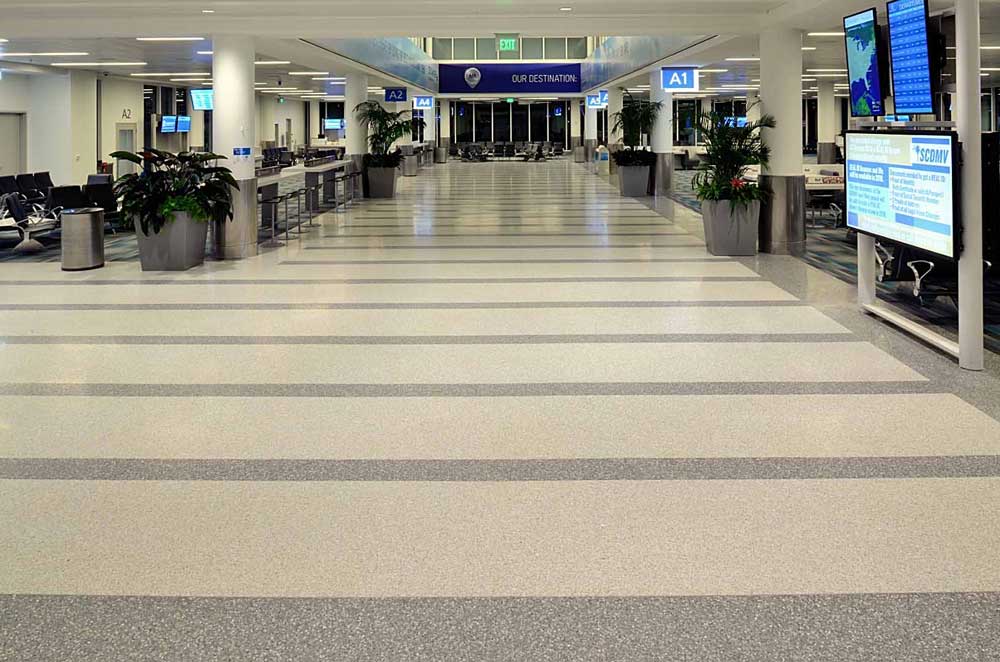 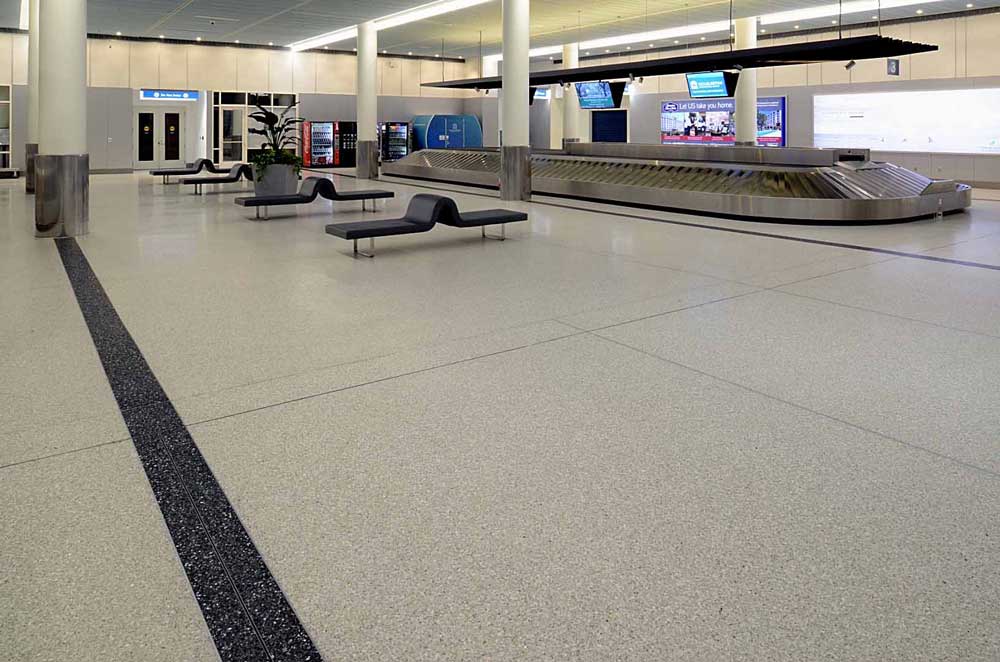 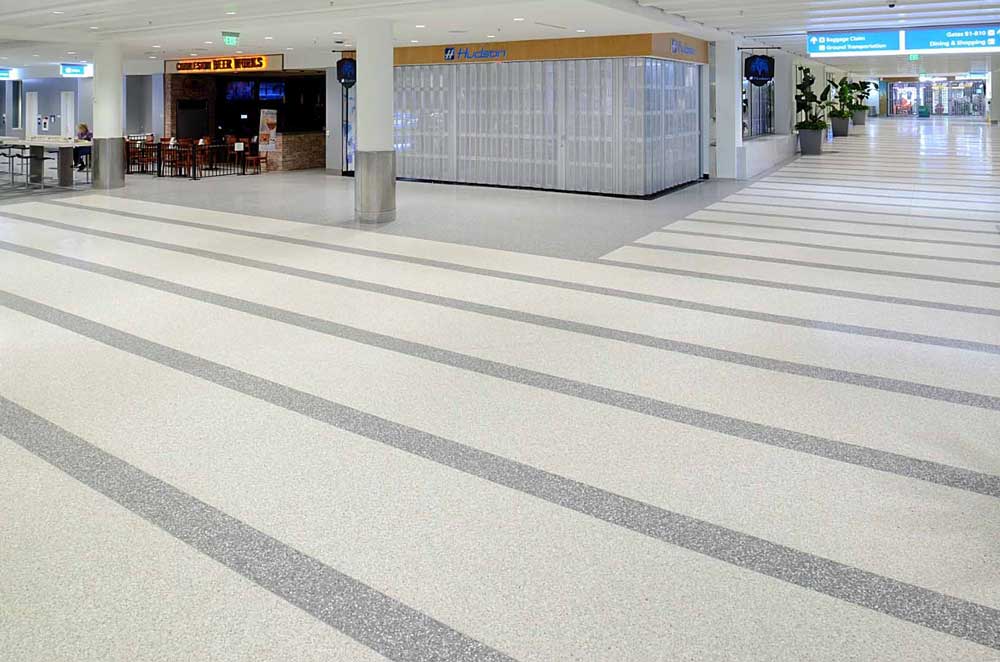 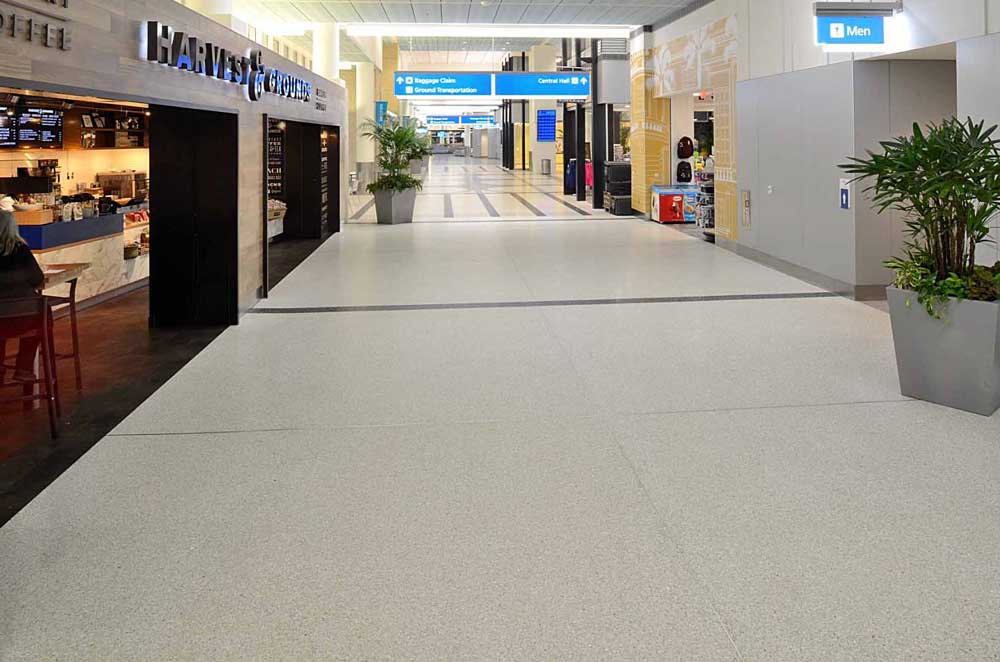 “We were able to salvage a lot of the skin, reusing the existing structure,” Mr. Smith said. The budget for the airport’s redevelopment program was low, considering the extensive renovations that were accomplished, which included new mechanical, electrical, and IP systems, he added.

According to John Wingo, senior project manager with David Allen Company of Raleigh, NC, terrazzo contractor on the project, removing the brick pavers and rebuilding the substrate was a prohibitively expensive proposition. The pavers would have had to be jack-hammered out; a noisy, messy, and labor-intensive process.

“And you never know what the concrete is like underneath it,” Mr. Wingo added. If the mortar bed were found to be installed over an inferior substrate, dealing with that would be yet another messy and labor-heavy obstacle. He estimated costs for taking out the original floor at a minimum of $200,000. Then, the price tag to fill the floor back up to elevation with a mix of epoxy with sand aggregate (a relatively inexpensive option for the fill) could be about $1 million.

In addition to the total of $1.2-1.5 million saved by the option of pouring terrazzo over the existing floor, Mr. Wingo also credits it with slashing several months off the schedule.

As it was, work phases were tightly segmented in the busy concourse; workers shared space with airport employees and other trades as well as travelers. Foot traffic was continually rerouted, and gate numbers reshuffled. “If floor demolition had been added simultaneously, it would have exponentially drawn out and complicated the work schedule further,” said Mr. Wingo.

The environmental impact of the waste that removing the brick pavers and mortar would have generated represents another unique advantage. “Debris was kept out of landfills, and the dust that would have been kicked up was kept out of active passenger areas,” Mr. Smith noted.

Charleston County Aviation Authority opted against pursuing LEED certification on the airport redevelopment project because of the $1 million or more that managing certification would have added to their expenses. Fentress took the initiative, however, to include LEED language for terrazzo in their specs, including low VOC and recycled content requirements.

Before installing the terrazzo, bondability tests were conducted to ensure proper adhesion to the 1.5-inch clay brick pavers. “The first simple test is to examine the floor for cracking,” Mr. Wingo explained. This job had zero cracks in the brick pavers, which had been installed on a 1.5-inch mortar bed. Cracks could indicate a loss of bond and possibly a sign of drastic movement that would indicate a structural problem.

Further low-tech tests included dragging a chain across the floor, tapping it with a pipe, and even bouncing a golf ball to listen for hollow points. The crew sounded it out, cored the existing floor to check for adhesion, and found it to have a solid bond. “No loose pavers were found; it was an exceptionally well-installed job,” Mr. Wingo said. 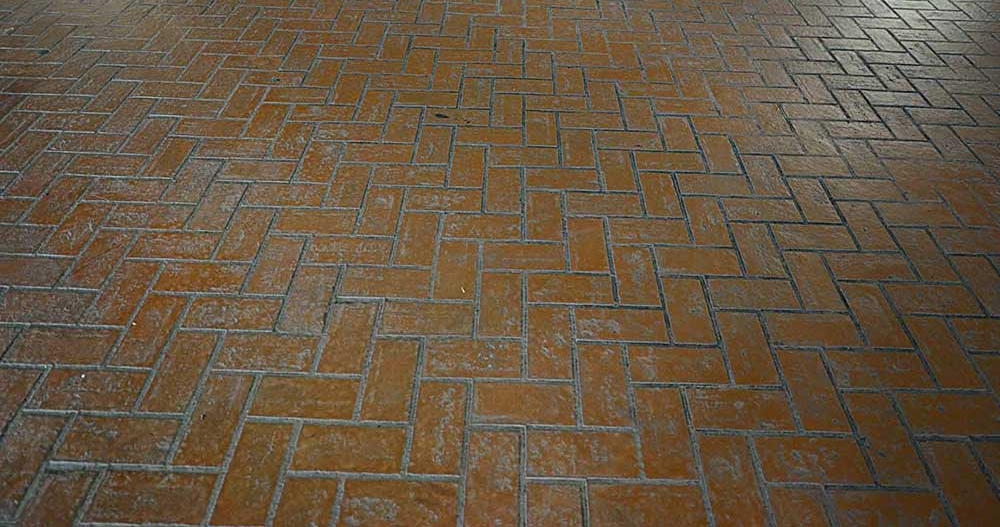 The team also checked for relative humidity in the concrete by coring the concrete substrate and inserting the ASTM 2170 Protimeter probe. The floor passed the test, but they put down a moisture treatment over pavers as a precaution. 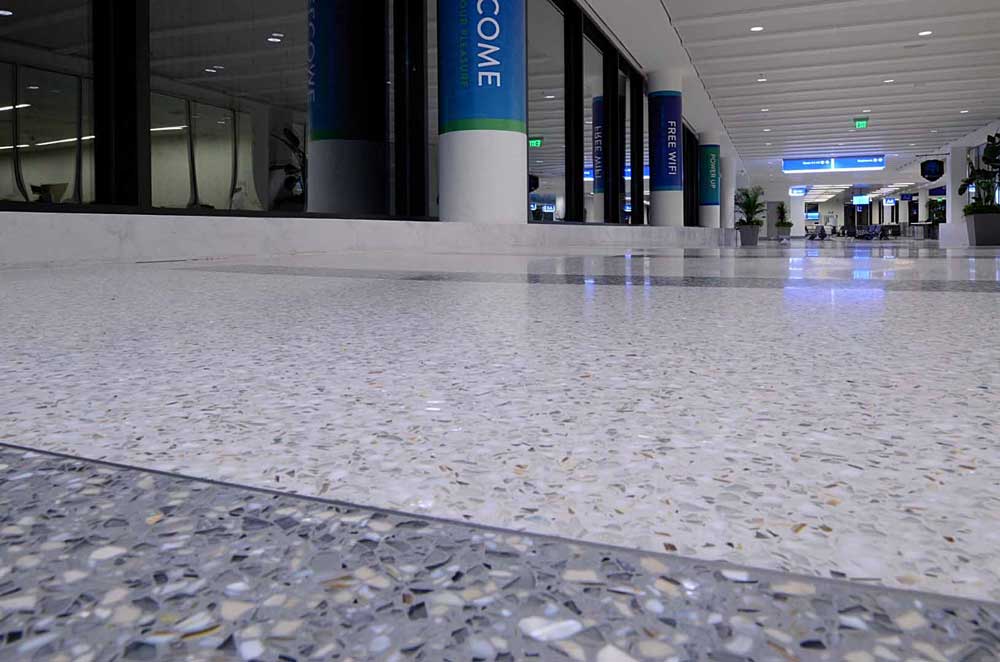 According to Mr. Wingo, the brick pavers were smooth, without much lippage, and worn by countless feet and wheels. To prepare the substrate, the pavers were treated as a concrete slab and shot blasted to rough them up before the moisture treatment was applied.

A slurry coat—an ultra-thin layer of epoxy resin and sand— was then applied to the surface to smooth out any uneven pavers and grout joints, followed by a 100-percent elastomeric membrane. The floor was completed with the application of 3/8-inch epoxy terrazzo.

The airport remained fully functional during the renovation. The terrazzo installation was broken down into 30 phases and sub-phases, with night work and tiny areas of work sectioned off where necessary to allow for the safe flow of the public.

Though terrazzo was initially a material choice for the main public areas because of its seamless finish for wheeled luggage, it also provided the design flexibility to capture the city’s distinctive character with a contemporary design. Open expanses and floor-to-ceiling glass walls bring in abundant natural light and offer travelers a clear view of airfield landings and lift-offs.

“Terrazzo was a big part of the redevelopment design,” Mr. Smith. “We couldn’t have pulled it off with any other flooring.” The terrazzo in five colors with mother-of-pearl, glass, and marble aggregates throughout the concourses was designed to represent the traditional gardens in Old Town Charleston; other patterns recall the planks of the city’s oceanside docks. “Carpet wouldn’t have had the same effect and quality,” he explained, noting that terrazzo is “a cleaner material” and more easily maintained than carpet, which can hold moisture and dirt.

Mr. Smith had worked previously with terrazzo in airports, including Sacramento International, another NTMA Honor Award winner (2012). He values epoxy terrazzo for its durability in airports and as an ideal finish for rolling bags. “It’s a good choice; it looks good,” he said.

In Charleston’s redeveloped and improved airport, the terrazzo is a unifying element for the airport’s various spaces and functions, flowing seamlessly over the different substrates, now hidden. The floor reinforces the design concept as the colors and patterns carry the passenger from the curbside to the gate and back. 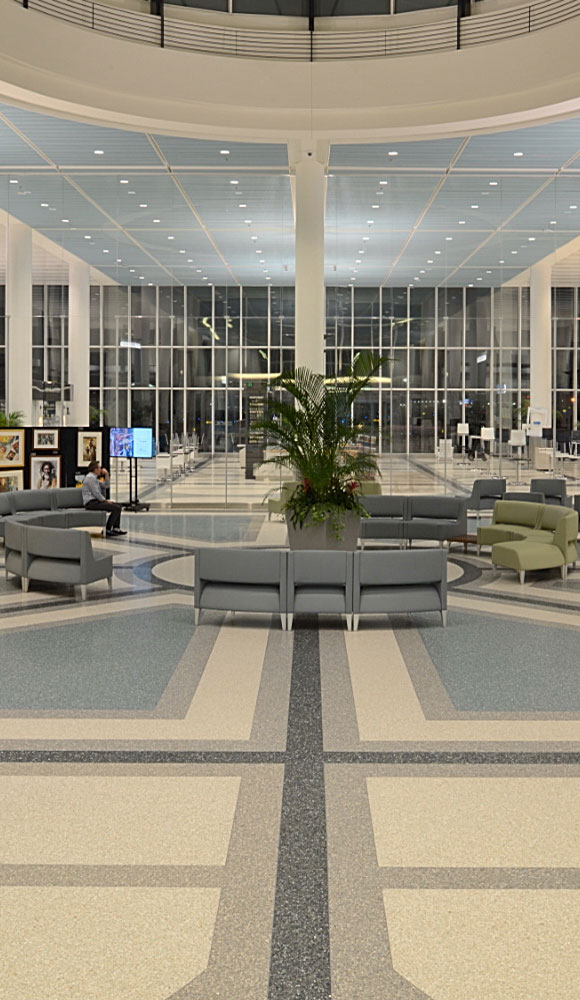 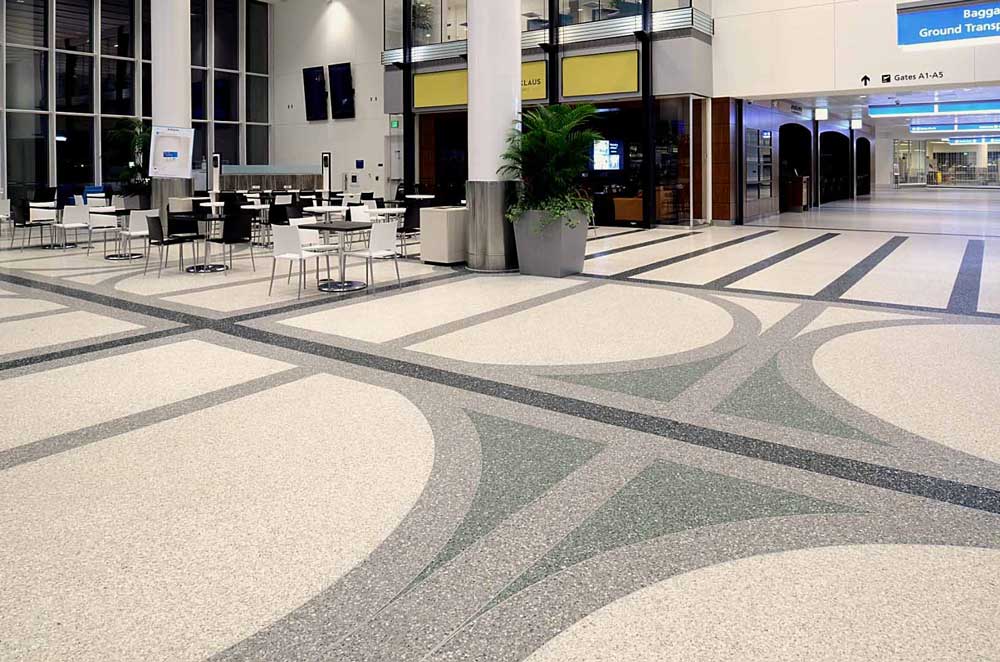 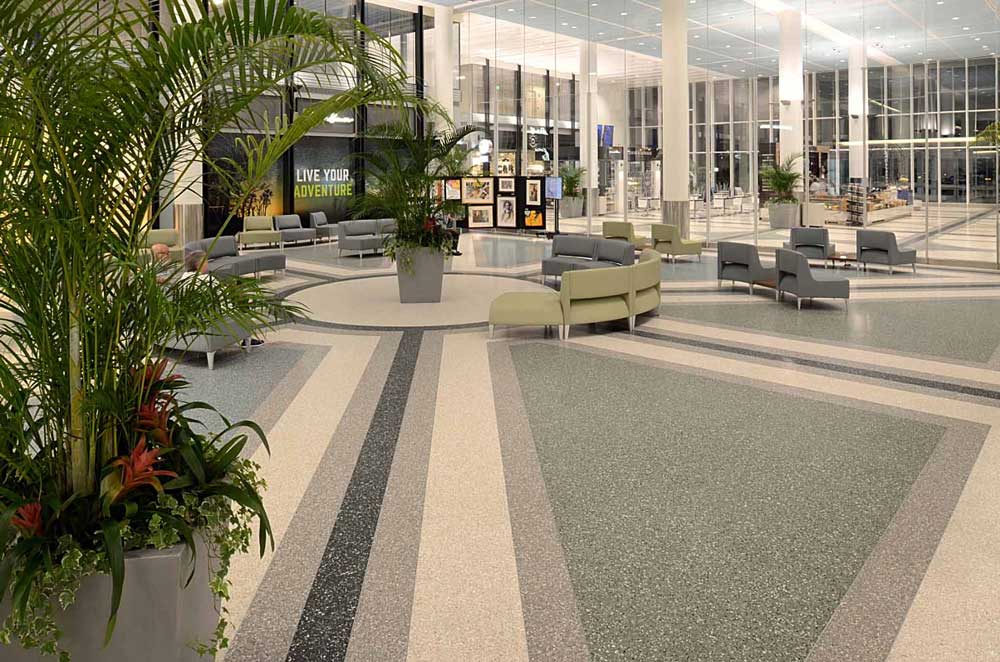 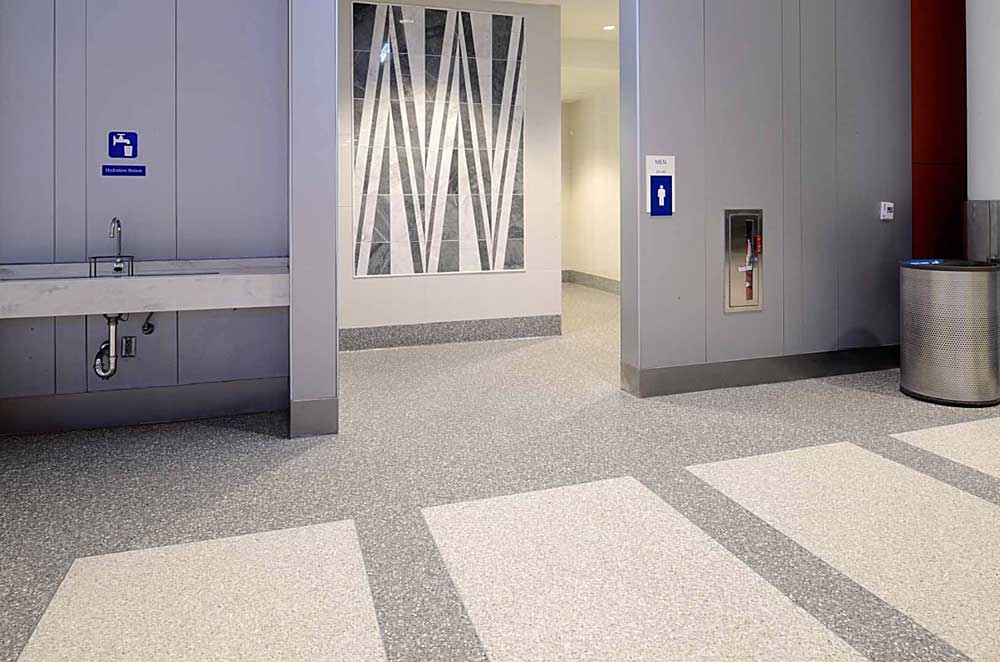 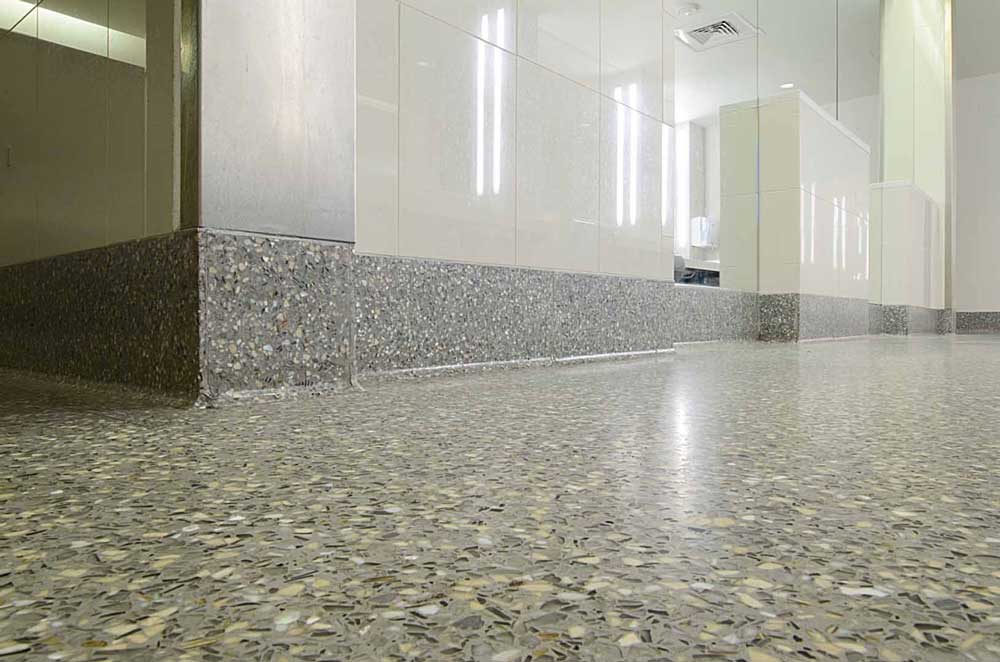