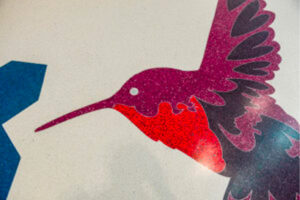 Design proposals were first solicited back in 2006 for a new intermodal transit complex for San Francisco’s center by the Transbay Joint Powers Authority (TJPA). This governmental agency was tasked with replacing the outdated and inefficient existing bus terminal to accommodate city and commuter buses, and ultimately, high-speed rail and commuter trains in lower-level train platforms and concourses. Phase 1 of the Salesforce Transit Center in San Francisco, approximately one million square feet, was completed in 2018.

“We wanted an iconic public space to convey a progressive image of public transportation,” explained project manager Randolph Volenec, associate principal with Pelli Clarke Pelli Architects (PCPA) in New Haven, CT. He explained what originally distinguished the winning proposal was a 5.4-acre public park at the complex’s top level. Cesar Pelli and Fred Clarke, PCPA’s founding partners, recognized that with downtown San Francisco’s growing number of high rises, it was an opportunity to offer much more than a rooftop as a view from above. With a plaza, amphitheater, footpath, gathering spots, restaurants, and extensive landscaping, it’s a working, livable space. 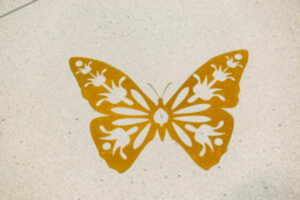 What was not fully defined when PCPA was awarded the project was the character of the transit center’s Grand Hall. The 23,000 square-foot space was planned as the main entry point, like New York’s Grand Central Station. As the central public space, it is now the defining focal point for the facility.

The design team specified terrazzo in the space. Mr. Volenec, 17 years with PCPA, had worked with terrazzo over the years. Based on his experience, he understood terrazzo to be durable, seamless, and conducive to a clean and easily maintained environment and a floor that would last the life of the building. He said PCPA wanted the same thing for the transit center and needed it to be beautiful.

“It was publicly funded, and we wanted it to be something the public moving through it would appreciate. It’s their building, and we wanted them to be proud of it, and they are,” Mr. Volenec said. He now considers this floor the most significant and elegant one in which he’s been involved.

With the help of a public art program established by the TJPA and administered by the San Francisco Arts Commission, an exceptionally intricate installation

of public art in epoxy terrazzo is one of the defining features in the terminal’s Grand Hall. Artist Julie Chang’s “Secret Garden” design integrates 16 epoxy colors and 375 waterjet-cut elements of brass and zinc. The terrazzo installation was named the 2019 Job of the Year by the National Terrazzo & Mosaic Association.

Mr. Volenec managed the PCPA project’s design and construction activities with the collaboration of 27 consultant firms. “I had never worked on a single project for 11 years before,” he noted, “but I couldn’t be prouder of this one than I am.” 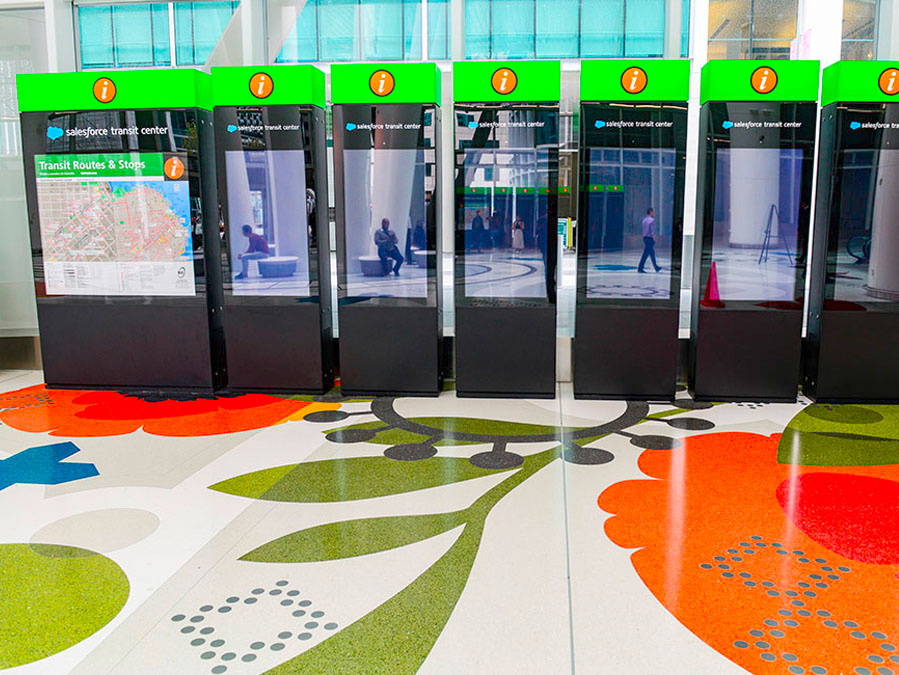 With its four large-scale, permanent, commissioned art installations, the building has also garnered a national architectural achievement award for public art from Americans for the Arts. It is one of the top 50 public art projects selected by the Public Art Network Year in Review program, founded last year.

Ms. Chang weaves symbols and suggestions of the city’s cultural diversity throughout the floor, intended to hold meaning for everyone who passes through. Its motifs recall an Indian sari, Chinese embroidery, Japanese crests, diamonds and chevrons reminiscent of African textiles and Greek pottery, and stars from Islamic imagery. 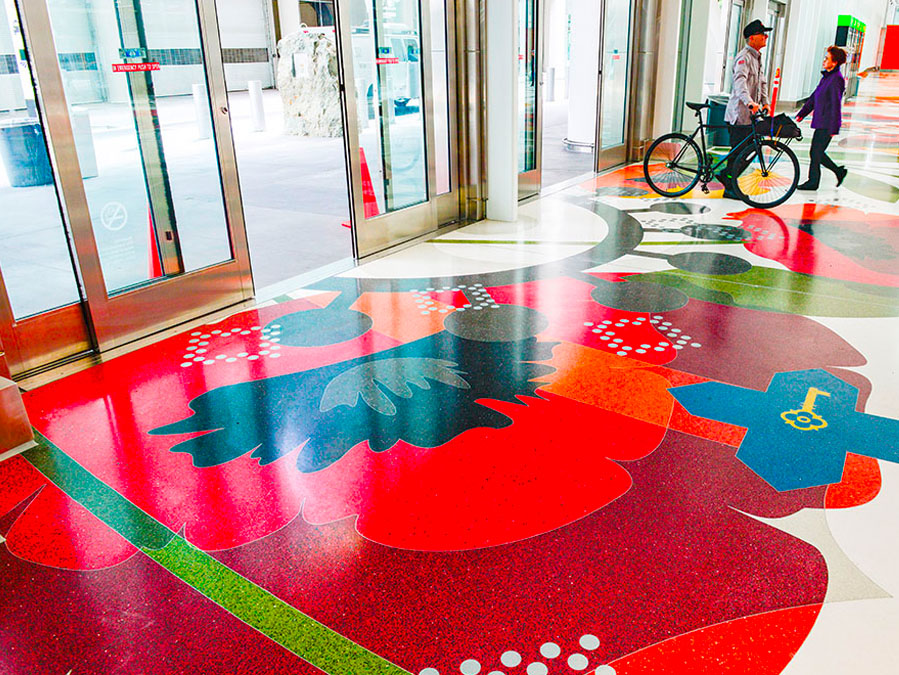 Jill Manton is the director of Public Art Trust and Special Initiatives for the San Francisco Arts Commission. She proposed to the Transbay Joint Powers Authority to voluntarily comply with the city and county Percent for Art Ordinance, which allocates two percent of construction costs to the installation of public art in civic facilities. As a result, they committed $4.75 million to bring art into the transit center.

“If this is the Grand Central Station of the West, you should have a public art program,” she told them. “Public art allows the artist to take on a pivotal role in the look and design of public facilities; they bring something new and different.”

The Arts Commission managed and oversaw the planning and development of the public art program, working closely with Mr. Clarke of PCPA to select artists, then working with the artists to designate the right places for their installations, and ensuring the success of the project.

In 2006, Julie Chang was a recent graduate of an MFA program at Stanford. She had never contributed to a permanent public art project, “let alone one of such architectural significance,” she said. Familiar with terrazzo by sight but not by name, she never imagined working with “this level of integrated architectural material” as a medium. Designing a piece of art that would be scaled up to 23,000 square feet presented its own set of challenges.

“Nothing can prepare an artist for the reality of a project of this scale,” Ms. Chang said. “No samples or visual projection, or any approximations to lead in the direction of how it’s going to appear, could prepare me for walking in on that space.”

She compares it to looking in a magnifying mirror that shows every pore: “Everything is exposed, hyper-color, magnified.” The use of aggregates added a layer of complexity and interest for her. “It was a natural fit,” she explained, “with exponential possibilities, and it was really fun.”

The artist selected all the colors, sample after sample, with the terrazzo contractor, Associated

Terrazzo, whom she described as “masters of their craft.” She was involved in every stage of the project, sometimes on her hands and knees with the artisans. She worked with the installers to ensure that the design she’d produced on a computer was translating correctly to the grand scale and to make any needed adjustments on site.

“I put this project at the top of the list in success. It’s far and away the best terrazzo art project I’ve seen in the US,” declared Ms. Manton. “The floor is magnificent, gorgeous, magical, spectacular, in a class by itself. It’s so unexpected in a transit facility. Photos don’t do it justice. I believe it transforms the commuter experience.”

“It was a dream project,” Ms. Manton declared. Mr. Volenec agrees: “We couldn’t have had a better team to put the whole thing together.”

The entire team worked together on the terrazzo floor to make sure Ms. Chang’s design was both technically feasible and affordable. Both Ms. Manton and Mr. Volenec credit Eddie Lourenco, president of Associated Terrazzo of San

Francisco, for working with them to create the vibrant colors and textures of the final design and to fully realize the artist’s design intent. Mr. Lourenco demonstrated a singular commitment to the success of the project.

“He recognized the value of leaving a legacy to the city and to his children and grandchildren,” Mr. Volenec explained. “He took great pride in it.”

Besides the Grand Hall installation, another 6,000 square-feet of single-color epoxy terrazzo flooring was installed in five different areas of the building, including five precast terrazzo staircases and eleven elevator cab floors.

The terrazzo project came in under the architect’s estimate, noted Ms. Manton. “He knew he had a jewel on his hands and wanted to make it work.” 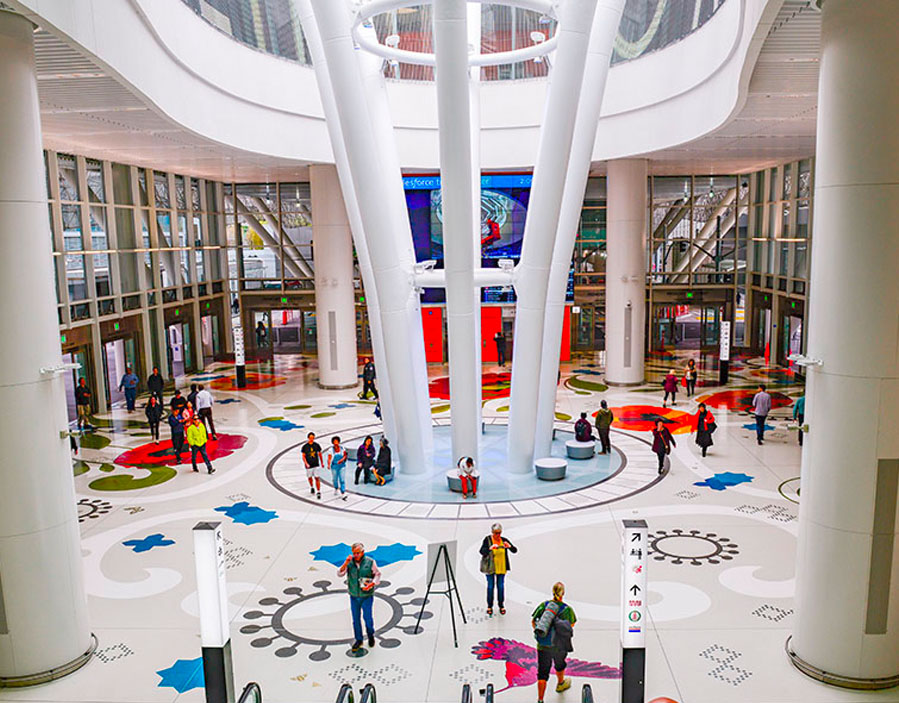 The Grand Hall is naturally ventilated because of the high volume of foot traffic, but the design team wanted to temper the space for those few days a year that San Francisco is uncomfortably hot or cold. Taking advantage of the stable temperature of the abundant groundwater surrounding the site, where the water table is 10 feet below grade, they specified geothermal piping under the two underground levels. The system provides HVAC for ground-floor retail and office spaces. The combination of natural ventilation and geothermal piping provided energy savings that exceeded state and city requirements, Mr. Volenec said.

In the main hall, the terrazzo was installed over a radiant flooring system. Several inches of foam insulation were laid down on top of the structural slab then topped with a heavy wire mesh. The system of radiant tubing was attached to the mesh and elevated on concrete pedestals. The terrazzo was isolated from the structure below to avoid movement or cracking of the slab that might telegraph through.

When the terrazzo contractors were asked to expedite the six-month installation schedule, prefabricating the divider strips allowed them to trim a month off and improve the quality of the strip patterns. While Mr. Lourenco noted that their crew is skilled in every terrazzo installation step, from preparing the substrate to setting the strips and pouring the matrix to sealing, Manhattan American Terrazzo Strip Company specializes in creating divider strips.

The segments are soldered together and ground to look almost waterjet cut for a more precise pattern.

Instead of the terrazzo contractor laying out the strips and the floor’s pattern, expanded metal lath panels as large as 11 by 17 feet with the strips soldered to it are produced in the strip supplier’s workshop and delivered to the construction site. The crew assembles and aligns the panels onsite.

The design and installation of the Grand Hall’s terrazzo floor took into account the projected second phase of construction. Considerable structural slabs will be removed for the installation of escalators to provide access to future commuter and high-speed rail in the lower levels. Ms. Chang planned for the openings to preserve the best parts of the design through the next phase.

The potential to expand the project into the surrounding Mission Square is on the horizon, Ms. Chang revealed. The team may have a chance to pick up that part of the plan where they left off early in the project and resume “the visual narrative begun in the Grand Hall as a starting point.” 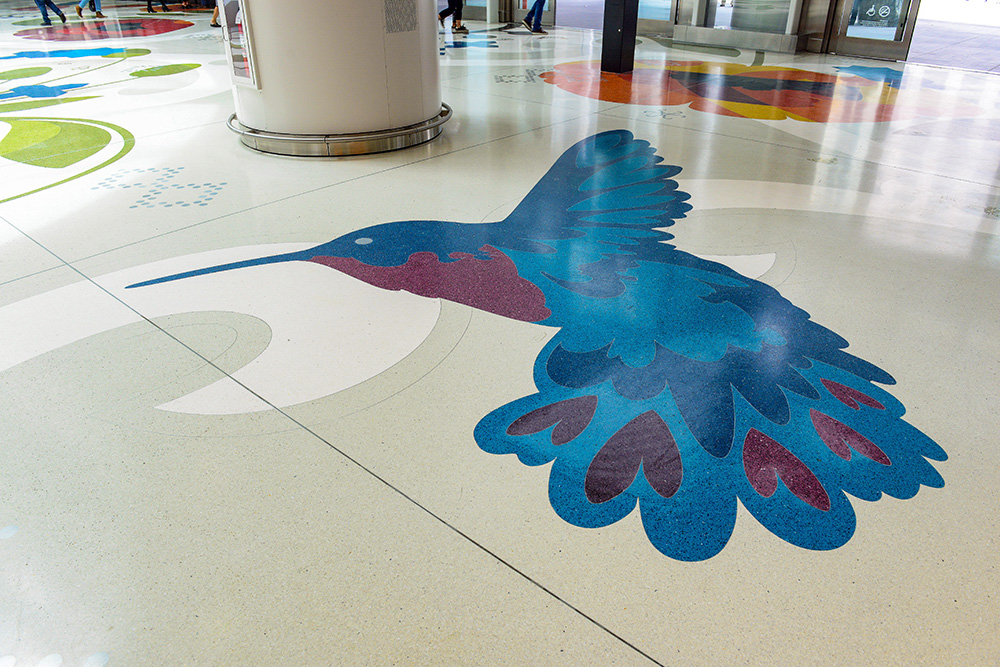 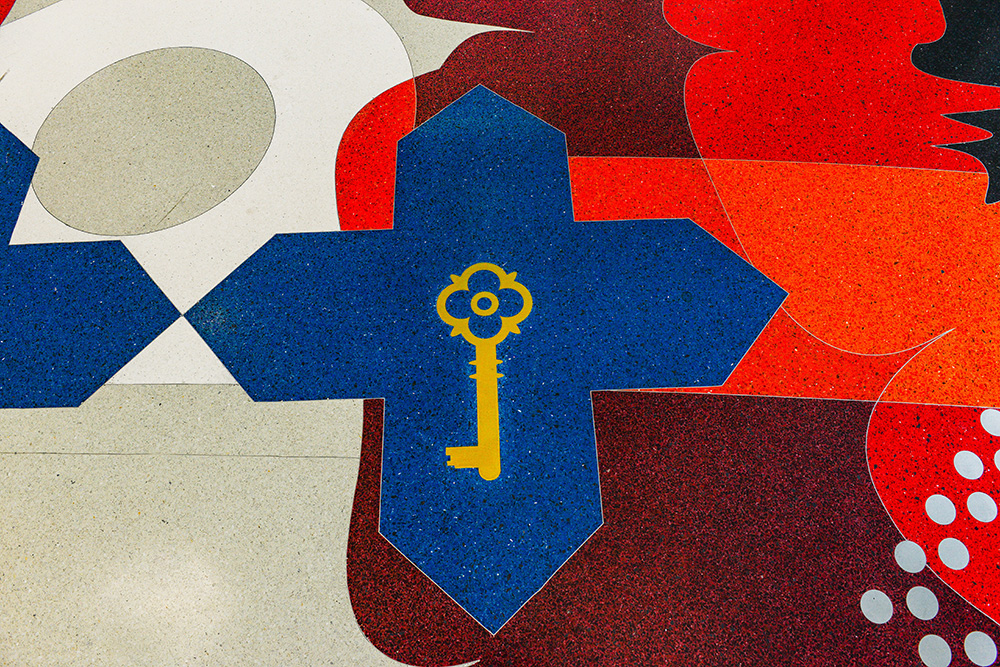 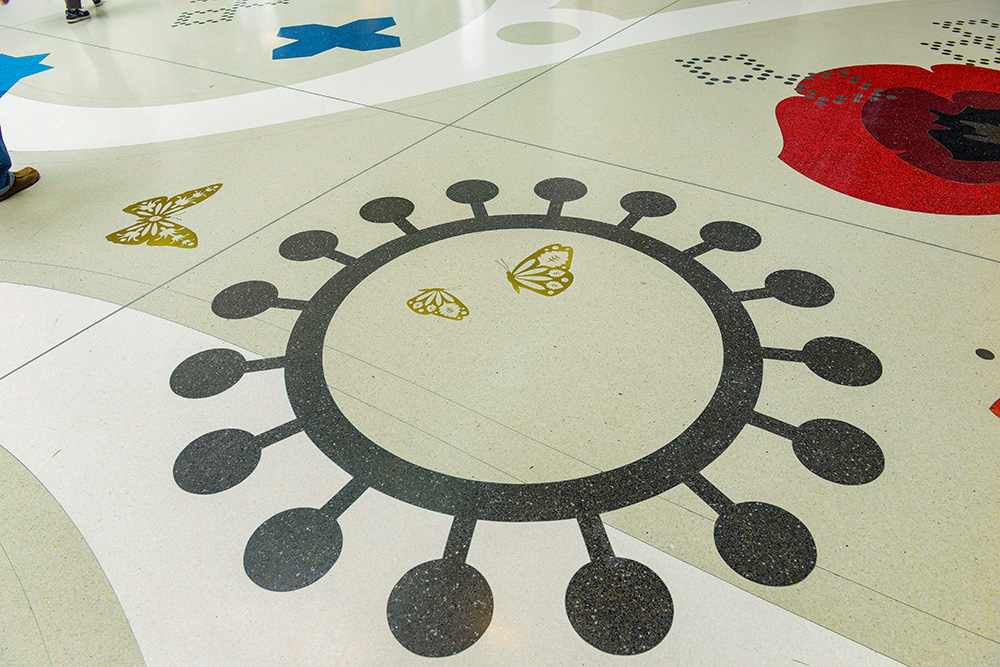 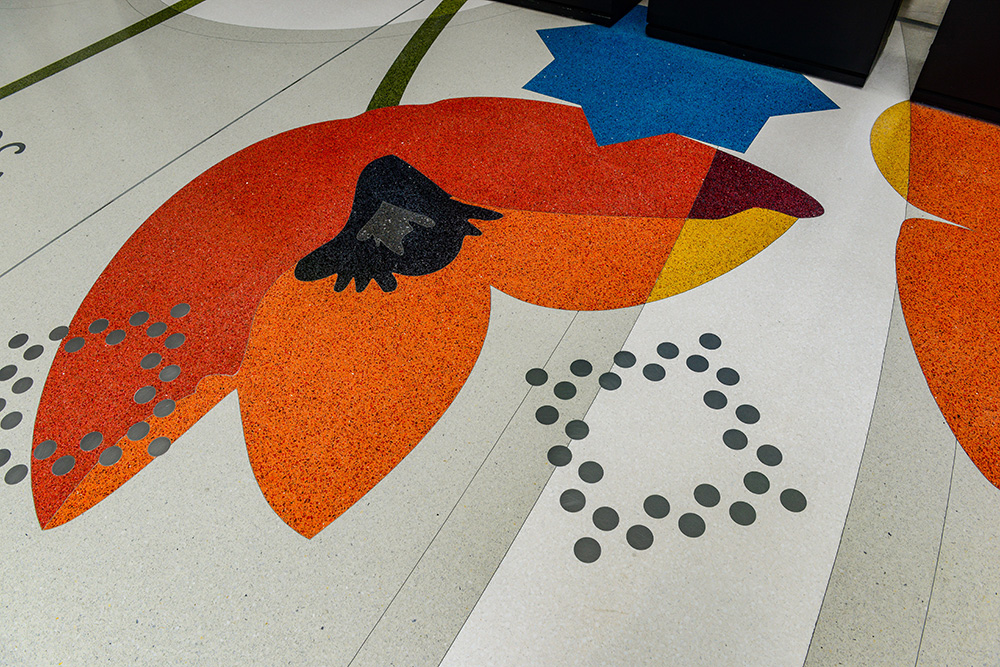 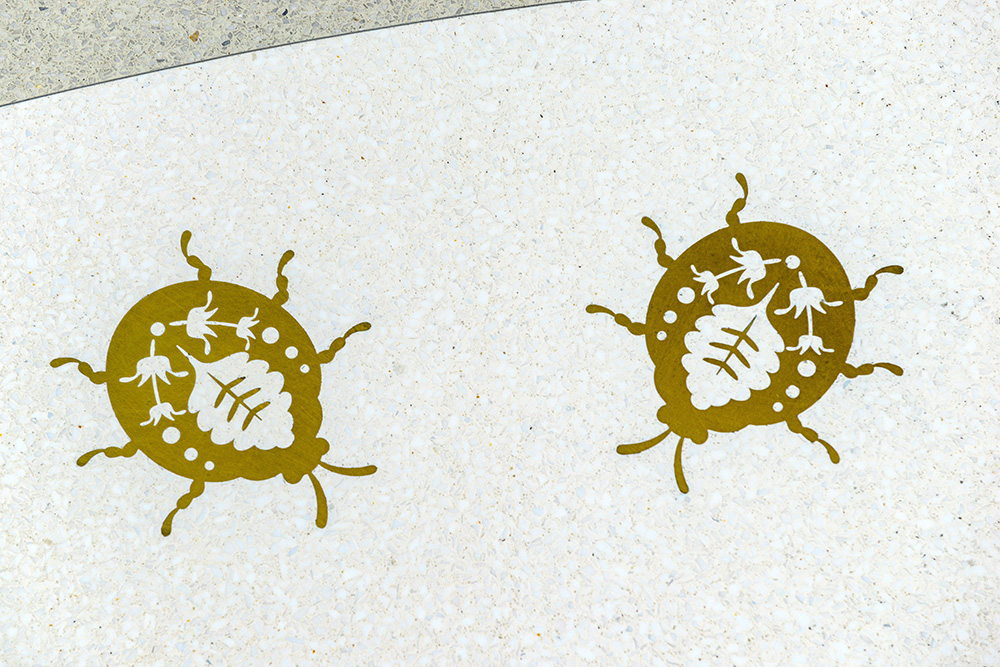 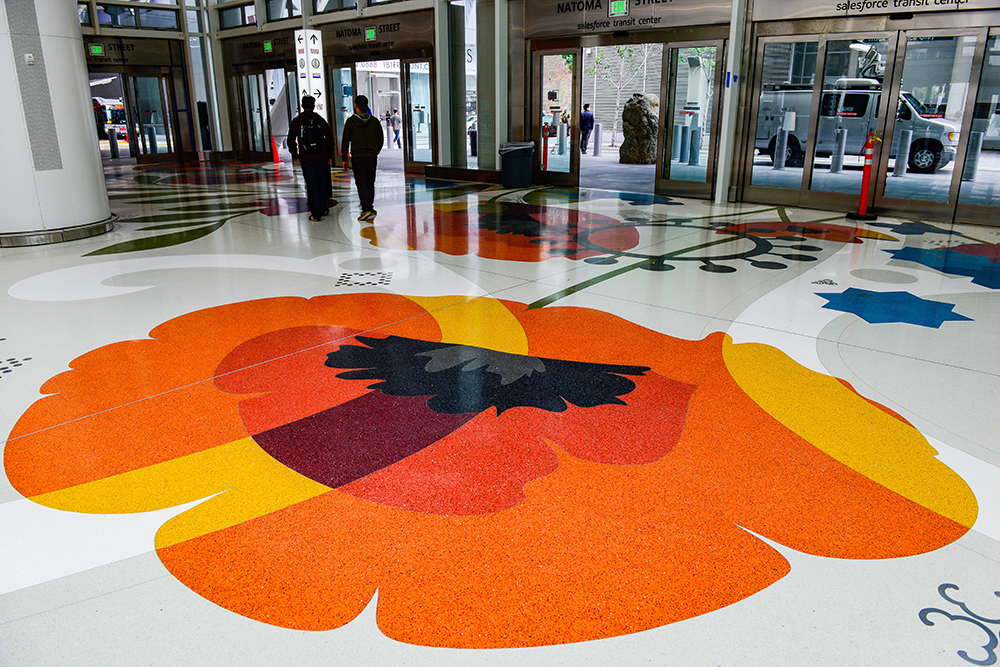