How Terrazzo Weathers a Hurricane

Expected to be Extraordinary

When Hurricane Ike-driven rain filled the Illinois River to overflowing in 2008, the nearby Central Intermediate School in Ottawa, IL, was inundated. The deluge devastated the one-story, 90,000-ft2 structure, built in 1947. Destroyed were the boilers, insulation, wiring, equipment, furniture, and doors. Floors were covered with a mere half inch of water, but as the dampness receded, the original asbestos tiles throughout the building detached from the floor. Worse damage had been averted by volunteers with sandbags and pumps, saving the wooden gym floor. Emerging perfectly intact also were the original terrazzo floors in the corridors. Yet in the final count, it was more expensive to repair damages to the structure than to abandon it and rebuild.

The school’s new 97,000-ft2 building was completed in December 2011 in a new location. The school district, knowing terrazzo’s resistance against the flood as well as its low maintenance costs throughout the district, decided to extend its use in the new facilities beyond corridors to the cafetorium and restrooms, for a total of 20,000 ft2.

“That the school district installed terrazzo again in the new building is a testament to their recognition of its longevity and durability,” said George Reigle, project architect. Reigle’s firm, Green/Associates of Deerfield, IL, has completed over 500 school construction projects.

“Terrazzo’s durability in this case is extraordinary only in the fact that it’s not extraordinary,” Reigle stated. “It’s to be expected. This kind of durability is inherent in the characteristics of the materials and how it’s installed.”

Unlike other hard flooring materials that are brought in and laid down on a base, terrazzo is poured in place on site.

“The reason most schools use terrazzo is because 50 to 75 years later it will still look the same as the day it was installed,” Reigle explained, as it did in the original school, before and after the flood. “Its low maintenance and durability are even more important than its flood-proof abilities.” 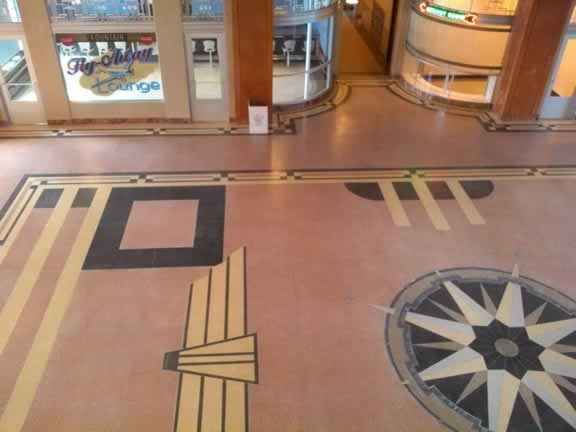 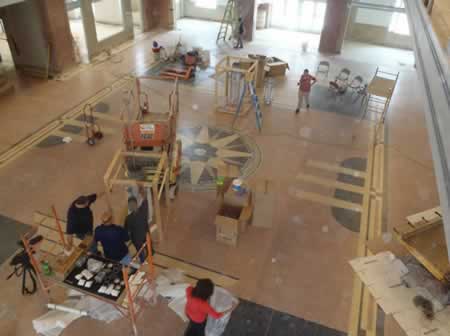 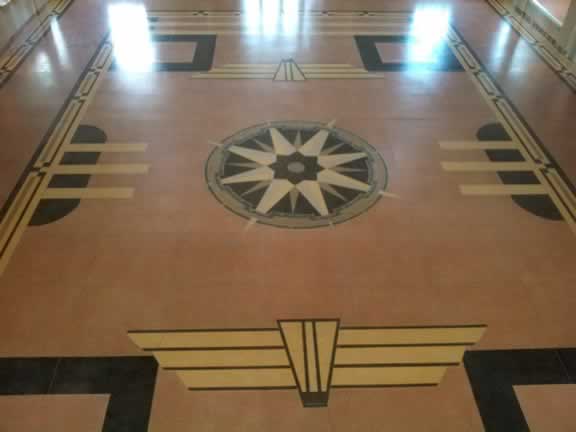 When Hurricane Katrina tore through New Orleans on Aug. 29, 2005, it took over 1,500 lives. The costliest natural disaster in U.S. history, property damage was estimated at $81.2 billion.

Some 80 percent of the city and vast sections of neighboring areas were flooded. Most of the deluge resulted from failure of the city’s levees and flood walls. Salt water surged in, picking up mud, waste, sewage, petroleum, chemicals and acids. The water saturated the city, then stayed, stagnating for weeks.

Among the massive property losses were most floorings: wood, carpet, ceramic tile and VCT. 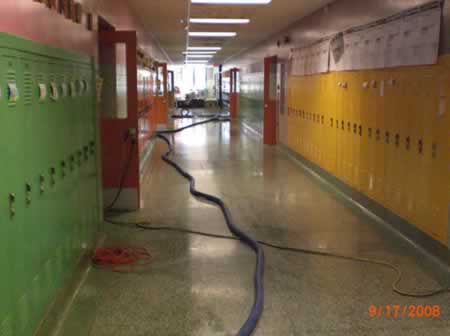 At the airport, the hurricane left ground level terrazzo floors submerged under four feet of water, furniture and equipment adrift. Once the water subsided, the airport’s newer materials especially had sustained damage, Davis noted. None of the drywall installed since the 1960s survived. Even the grid behind the plaster rusted. But except for a few places where heavy equipment had gouged or cracked the floor and required repair, the floors needed no more than a light sanding and polish.

Damages from the hurricane led to a complete $17-million restoration of the 1934 airport to its original design. One of the earliest and few remaining Art Deco terminals in the U.S., it had been renovated in the 1960s as a monolithic, bunker-style fallout shelter.

Terrazzo floors around the city were found intact. Many were in older buildings, including the train station terminal. If structural collapse or large equipment falling had chipped or gouged them, these floors were reparable. As in the airport, most required nothing more than polishing and refinishing. 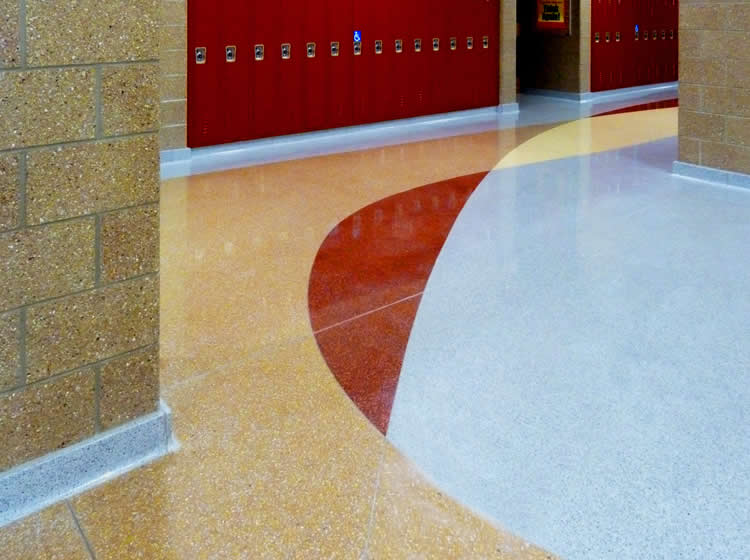 The Reflooring of New Orleans

Insurance didn’t specify taking out terrazzo after Katrina, recounts Clyde Martin of American Tile & Terrazzo, Co. of Metaire, LA, contractor on the airport renovation. Not only were the floors basically intact, but terrazzo is also extremely difficult to remove, another sign of its durability.In the first wave of rebuilding in the city, many irreparable floors were replaced as quickly and cheaply as possible, mostly with tile, Martin said.After the first flurry of rebuilding, the next wave of work for Martin’s company was the rehabilitation of terrazzo floors. The city’s convention center was one major project. Many of the old terrazzo floors were in churches and schools owned by the Catholic Archdiocese of New Orleans.The disaster created a serious shortage of general contractors in the area who knew how to schedule a terrazzo restoration project, and architects with experience in specifying such jobs.In response, Martin’s company held an informational box lunch session for the archdiocese and 30 architects.“That started the snowball rolling,” Martin said.

As the ravages of Katrina spotlighted the toughness of terrazzo, it became a flooring of choice for new construction.

In one church, the roof and stained glass windows were destroyed, the statues reduced to rubble. All that could be saved were the structural steel, a few brick walls, and the terrazzo floors, Martin said.

“It clicked,” he added. “Architects realized that if the only flooring saved from Katrina was terrazzo, we should use it when we build something new.”

New construction post-Katrina followed a new flood proofing trend, based on the materials that had passed the test of the hurricane: metal roof, concrete block, structural steel and terrazzo floors.

Water destroys carpet and vinyl tiles, Martin explained. Ceramic tile is easily broken by falling furniture and equipment and is hard to patch because of UV discoloration. If tile grout is stained, it’s more cost effective to start over.

After the flood, with no TV or radio functioning, promotion of terrazzo reconstruction consisted of word of mouth and signs posted everywhere for “FLOOD PROOF FLOORING,” Martin said.

Today’s generation of epoxy, thin-set terrazzo is less labor-intensive, but even stronger and more crack-resistant than traditional cementitious stucco, while retaining the original product’s longevity.

A victim of its own success, terrazzo’s extreme durability leads to a misperception of its cost, Davis reflected.

“The perception is that everything old is prohibitively expensive, and that something you can buy and bring to the site is cheaper.”

While the initial cost for installing terrazzo is among the more expensive flooring options, “look what you’re getting for the money,” Davis stated.

For the architect, terrazzo’s design flexibility may be its most valuable attribute.

“It’s as fluid as you want in design,” Davis said. “It’s hard to be that flexible with other hard finishes. You can do patterns in concrete but not nearly as beautifully. Terrazzo is the prettiest flooring you can possibly have, more than stone or concrete. 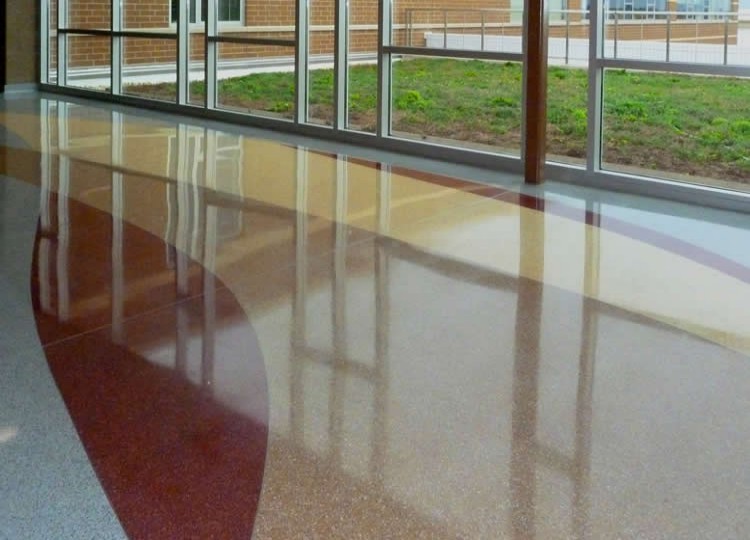 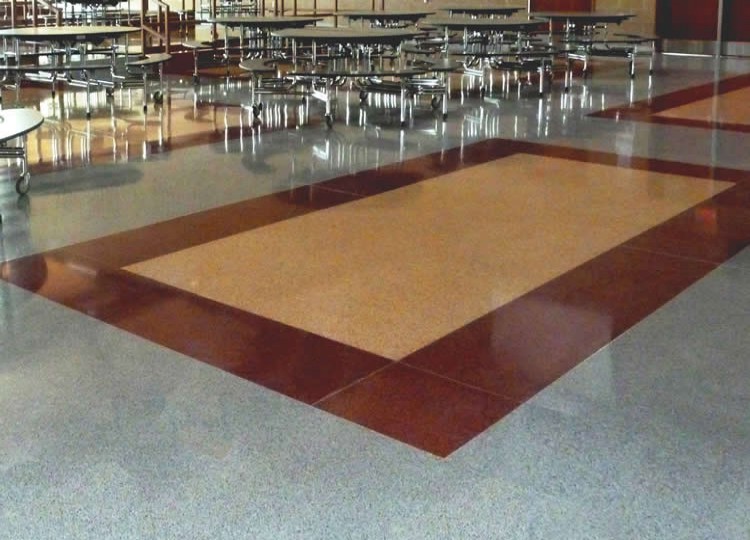 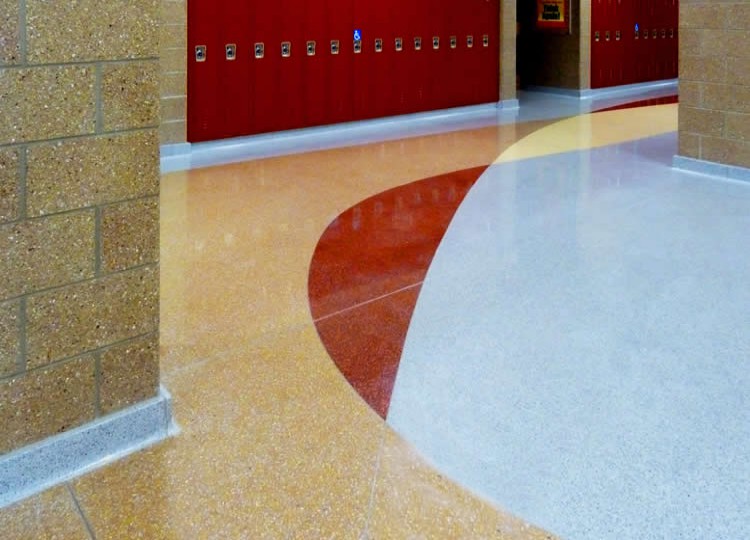 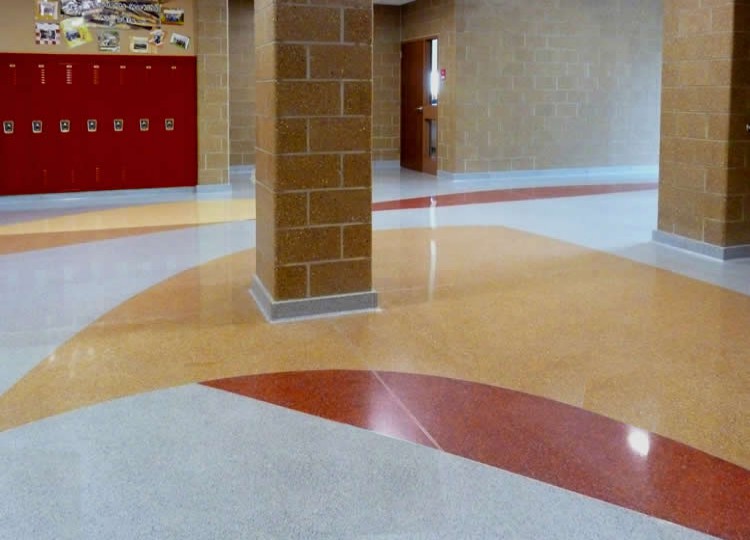 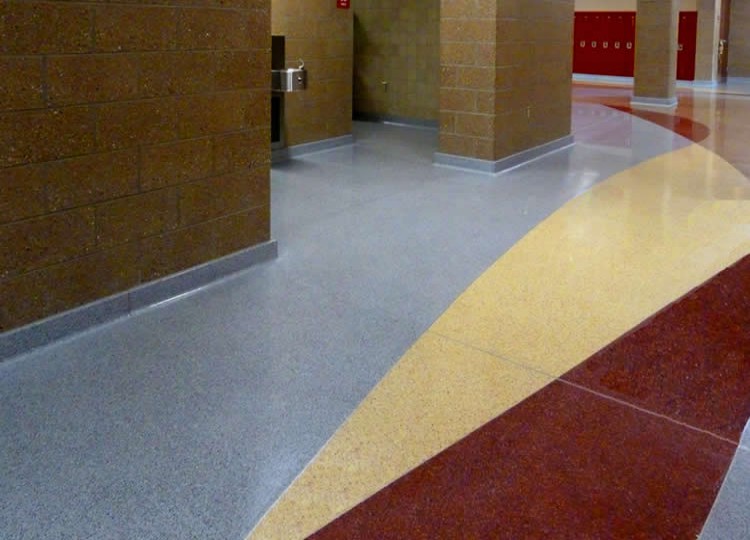 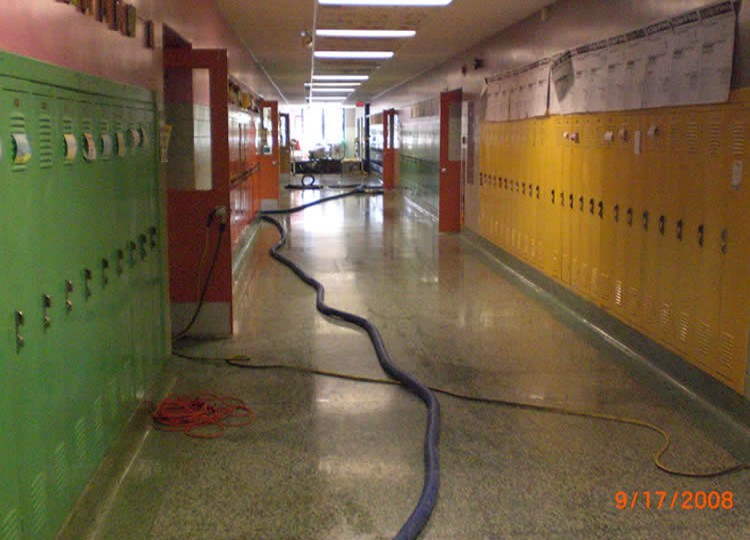 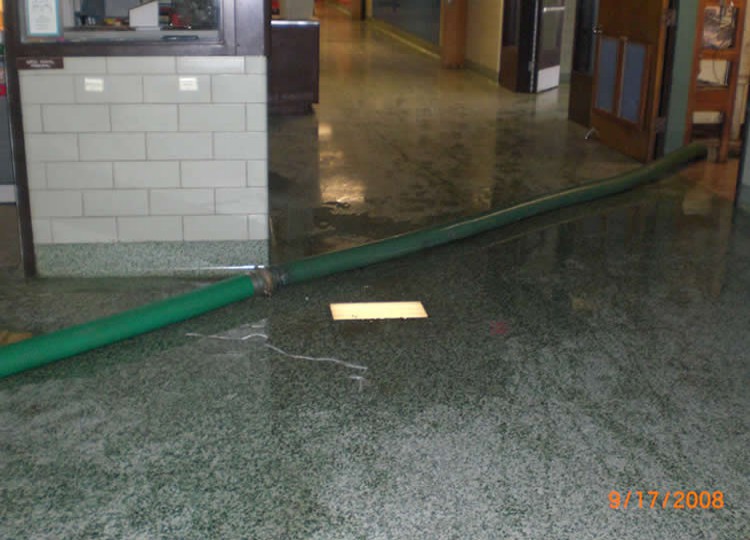 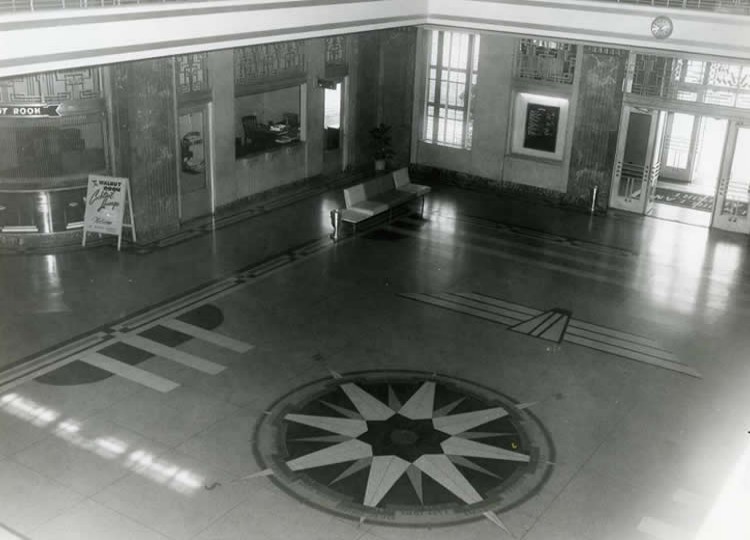 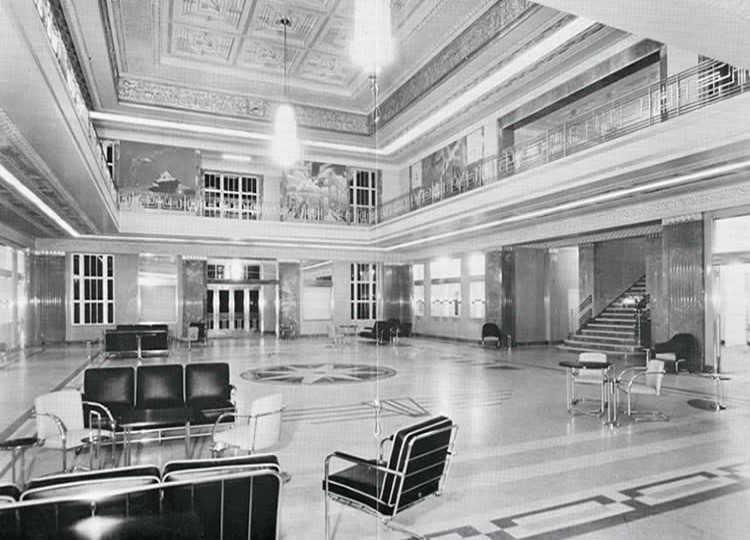 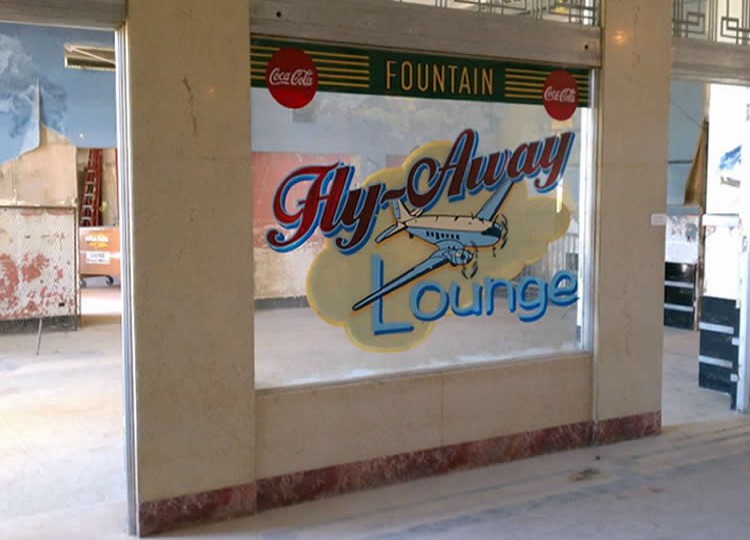 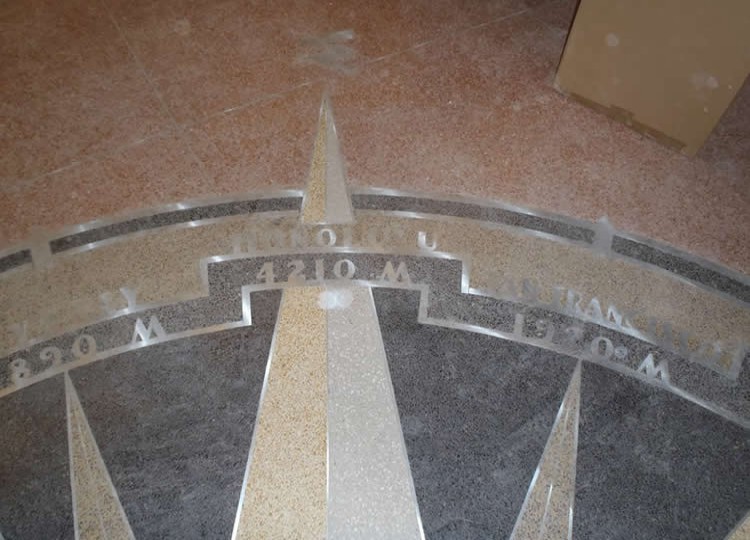 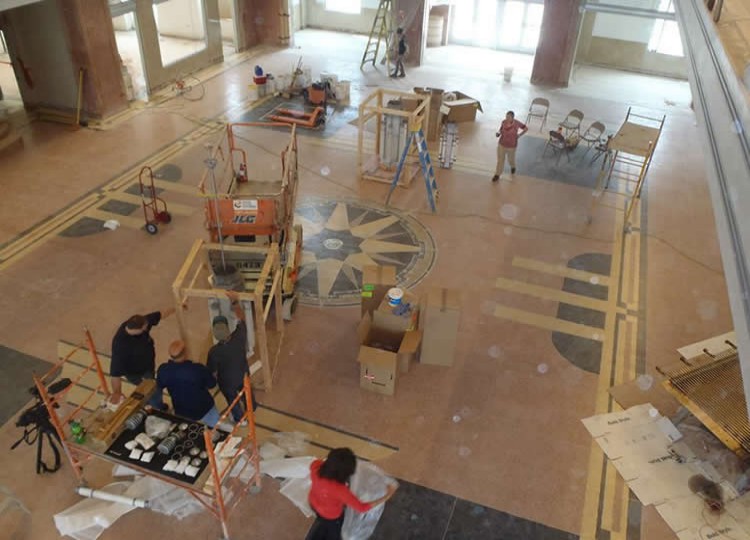 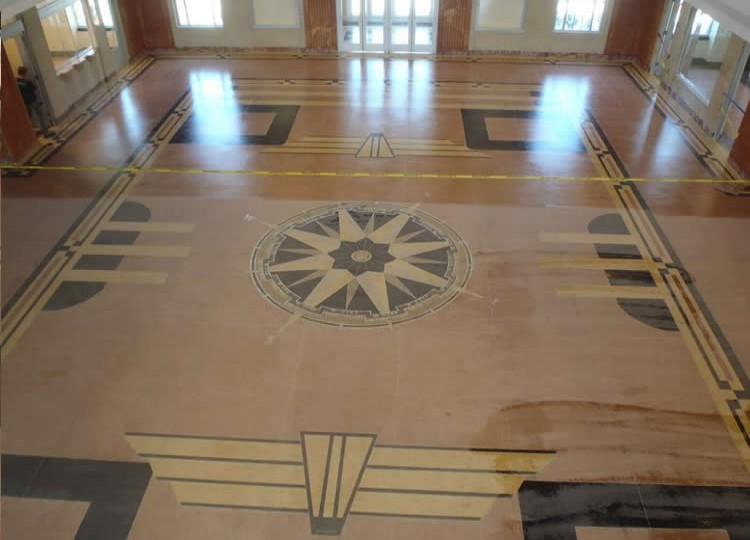 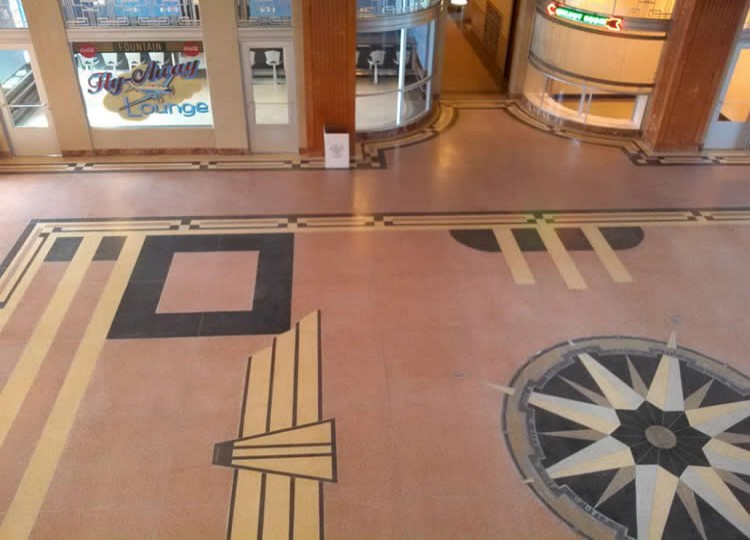 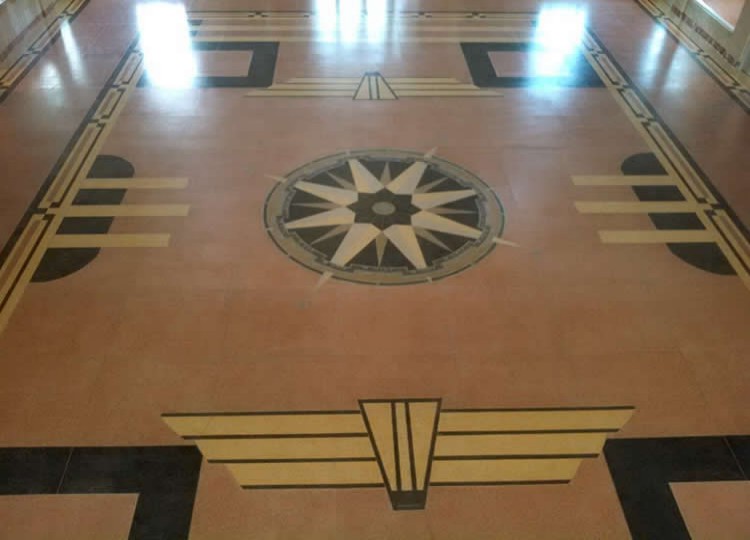