On the Mississippi River’s east bank, in the historic New Orleans suburb of St. Bernard Parish, in the old section of the town of Arabi, is one of those stubbornly sturdy structures worth restoring and repurposing. Originally built as the town’s first public high school in 1929, for over 50 years it continued, a middle school in those later years. The building, now called the Maumus Center, had since been reincarnated as a Red Cross shelter, a community center, and a theater and arts center.

After continually serving the community, generation after generation, in 2005 the old structure was decimated by Hurricane Katrina, as it had been 40 years earlier by Hurricane Betsy. In 2009, the St. Bernard Parish School Board began planning a major conversion of the former school.

Jim Wehrlin, senior project manager with Gibbs Construction in New Orleans, managed the project for the building’s latest reinvention. Mr. Wehrlin is a native of St. Bernard Parish. “The parish was 100-percent wiped out by Katrina, under 20 feet of water,” Mr. Wehrlin recounts, including the old school building, a treasured landmark. Serving as a school again wasn’t an option because of current regulations, he explained, so the school board settled instead on creating a science learning center with a planetarium and interactive museum that would serve the entire district.

Sun, moon and stars are built right into the floors at the new center, integrated within the interactive learning centers and exhibits. Spreading wide in the lobby is a sparkling, seven-color, nine- by 22-foot representation of the Milky Way Galaxy in epoxy terrazzo; its free form stars and black holes were installed by hand in the field without divider strips. Outdoors, a covered learning area, understatedly referred to as the “garden shed,” is equipped with a sun calendar that accurately indicates time and date with a beam of sunlight through an oculus in the roof onto brass markers embedded in the floor.

The Maumus Center celebrated its grand opening in early 2016. Within the year, the American Institute of Architects presented New Orleans architects Waggonner & Ball a Merit Award for Adaptive Reuse for the project. The job likewise netted an Honor Award from the National Terrazzo & Mosaic Association for the terrazzo contractor, Terrazzo Masters of Metairie, La. 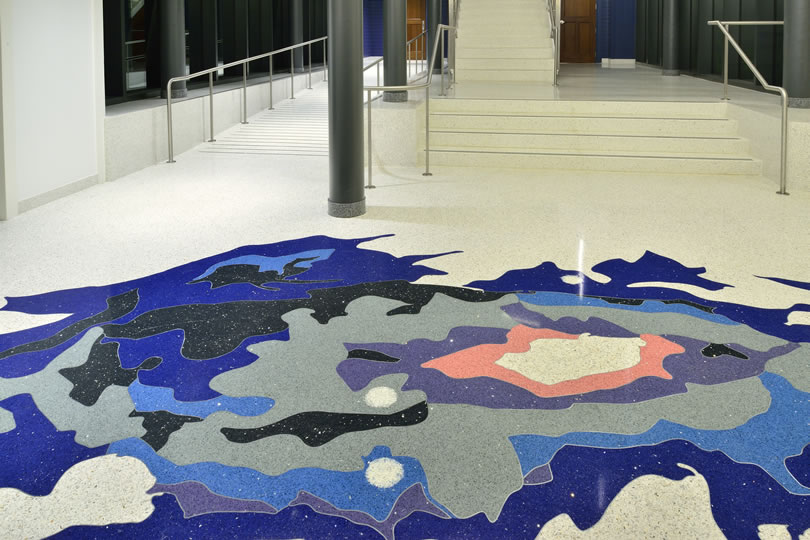 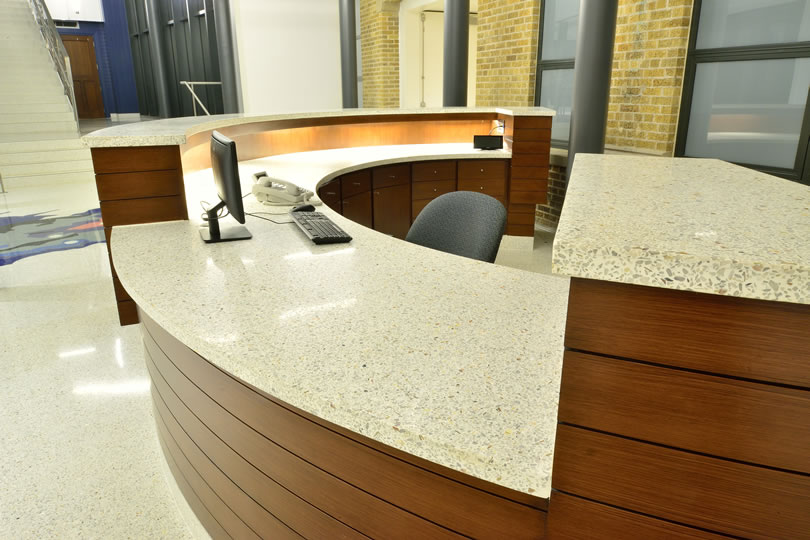 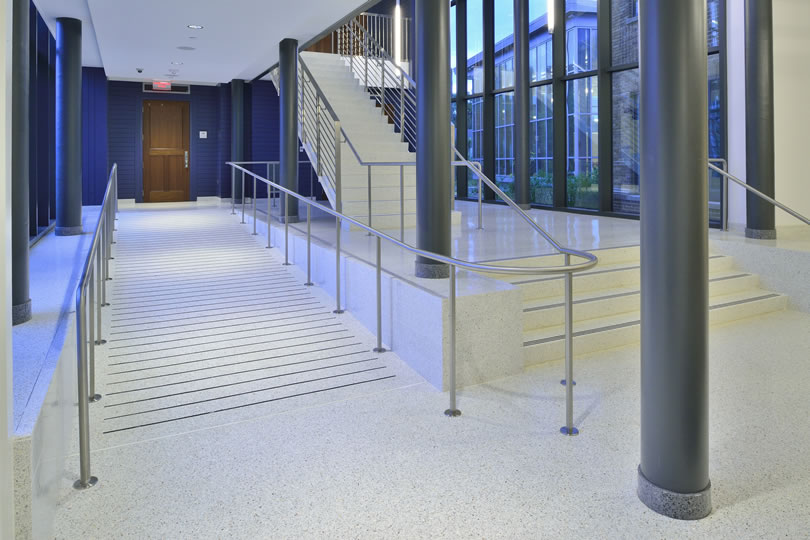 “This 15,800-square-foot installation in 18 colors is a fascinating showcase for the potential of terrazzo and a model of skilled craftsmanship,” said Mark Fowler, executive director of the terrazzo trade association. “A variety of appropriately placed and scaled elements come together in a design that successfully blends simplicity with high impact.” 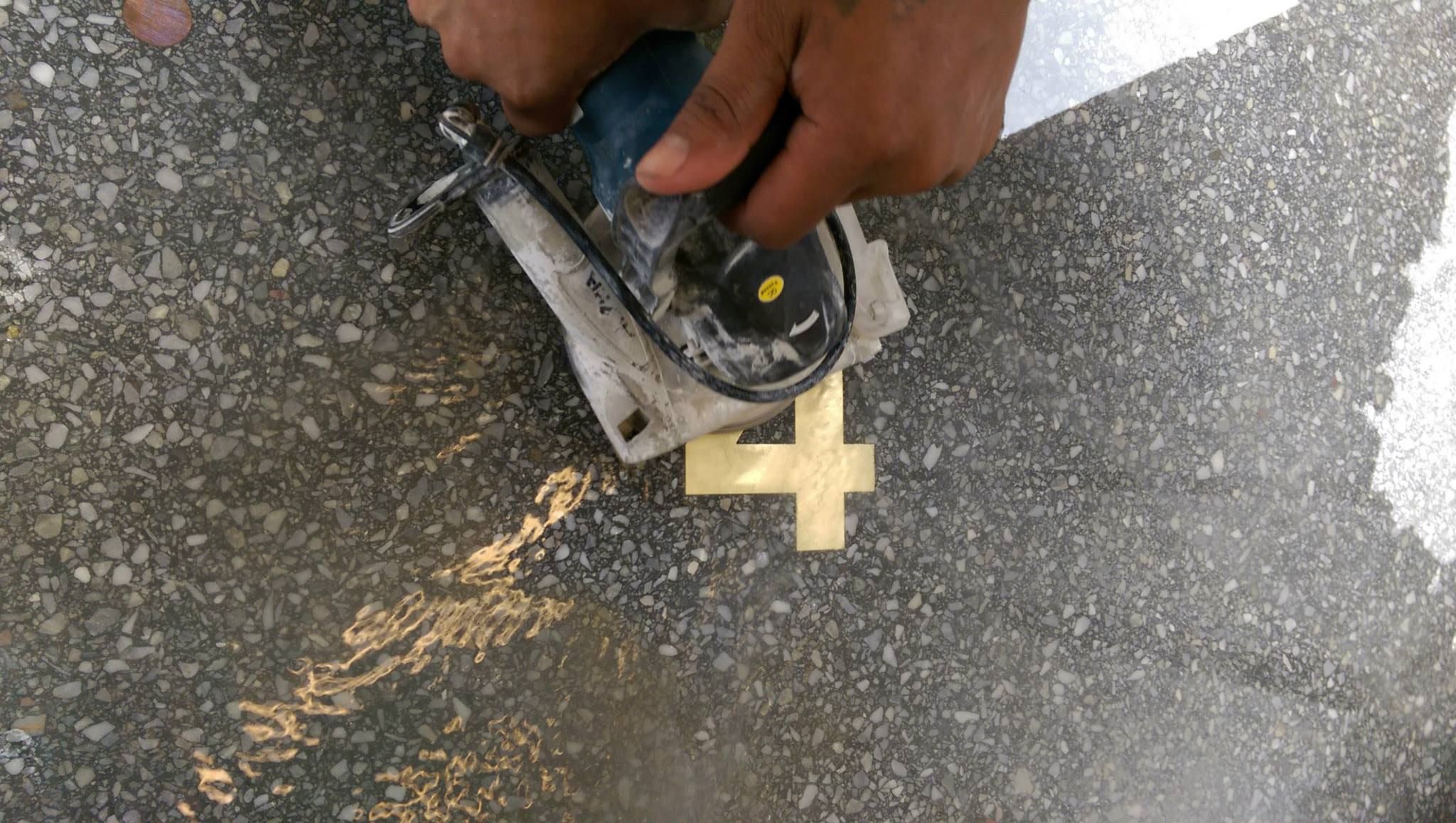 Early plans for the Maumus Center specified a simple covered garden potting shed on the south side of the site, doubling as outdoor classroom space. That element of the plans captured the imagination of the project architect, Charles Sterkx of Waggonner & Ball, and he proposed to the school board his idea of taking the design much further by adding a functioning sun calendar to that space. The plan was enthusiastically adopted.

Studying a solar chart, Sterkx devised a way to mark the hours on the floor. He noticed that the figure-eight shape pattern, or analemma, on the chart matched the shape formed by the points he had plotted on the floor. Mr. Sterkx also adapted a pattern intended to be projected on the inside of a hemisphere so that it could be projected accurately on the flat floor slab. The height of the oculus was set at nine feet to project proportionately on the 20-foot by 34-foot floor plan.

Over 1,000 one-inch diameter, half-inch thick solid brass discs were water-jet cut and placed by hand, with perfect precision. The brass arcs were bent in the field and laid out by hand, all soldered to mesh backing. The system of brass markings is set into 850 square feet of a two-and-a-half inch bonded cementitious terrazzo system in two colors. 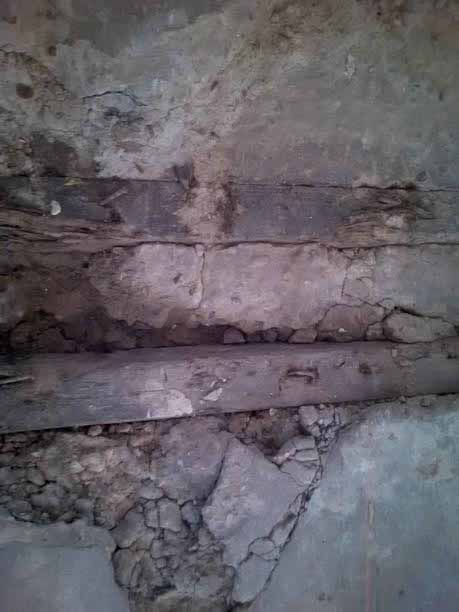 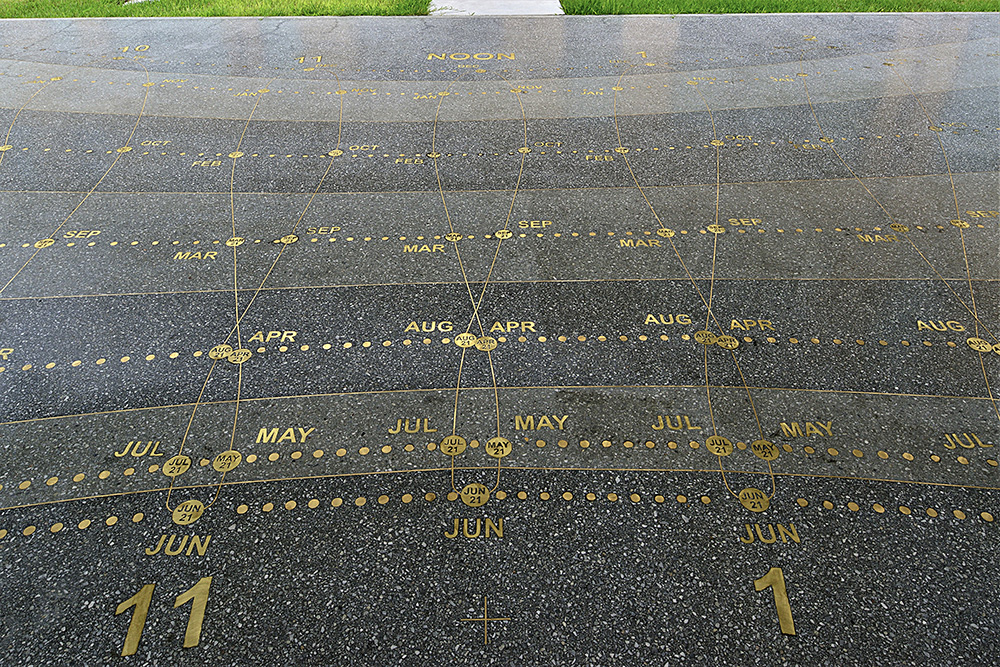 Every 21st of the month, a sunbeam is directed to brass disks in the floor, indicating the hour and date, with smaller disks tracking every five minutes. After the layout was completed, its accuracy in tracking the sun was verified over several months before final installation. The oculus plate was installed and the terrazzo mostly finished, except for final grinding and sealing, in time for the summer solstice on June 21, 2015.

Arabi is nearly dead center in the middle of the central time zone, as Mr. Sterkx noted. Solar noon in Arabi is 12:02; New Orleans is 12:04. 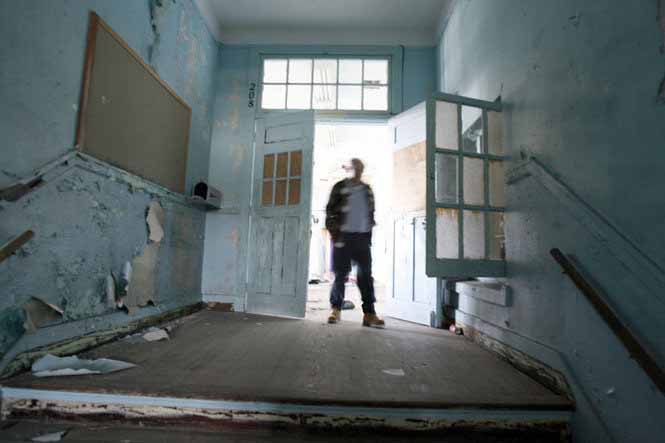 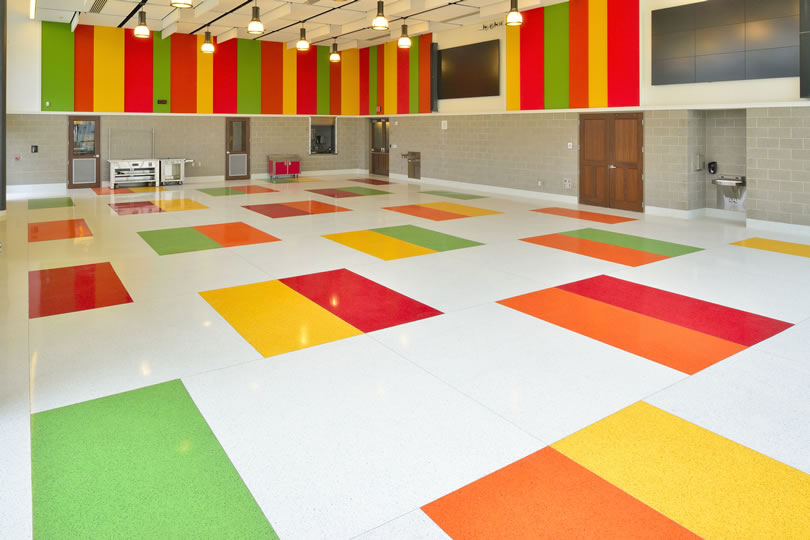 “Everybody’s watch here pretty closely matches the sunspot’s movement across the pattern without a correction for standard time vs. solar time,” he reported.

“Preserving the old charm of the historic building while improving its functionality proved a challenge,” said Albert Carey, project manager with the St. Bernard Parish School Board.

The use of various terrazzo systems provided the durability and design flexibility needed, said Emily Palumbo, project manager and a registered architect with Waggonner & Ball. That choice “allowed us to respect and complement the type of building it was,” she explained. The design responded to existing materials while creating highly distinctive features in the center.

The interior design took its cue from a restored original terra cotta tile floor in the lobby, which had been damaged by Katrina. Certain existing wall finishes and other historical elements also were taken into account. 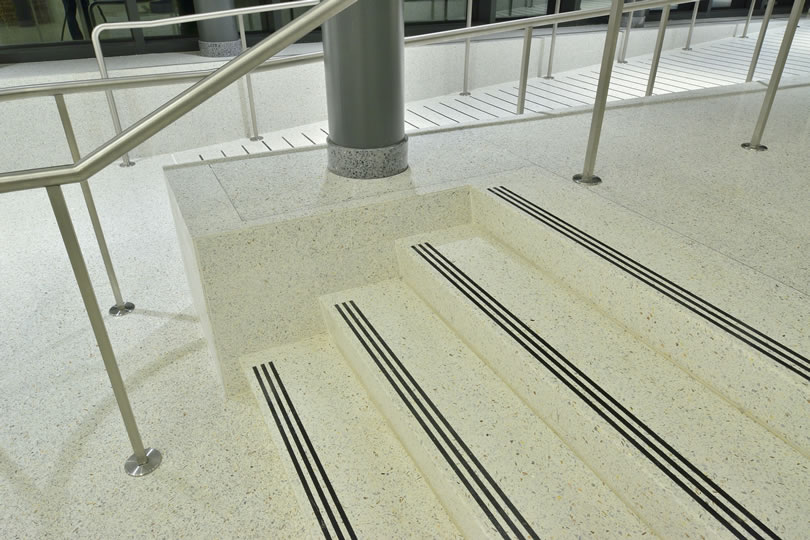 Numerous structural challenges arose during renovations on the 80-year-old structure. The project included restoration of the 30,000-square-foot existing building and a 4,000 square foot addition with a new cafeteria, kitchen, planetarium, and garden shed structure on the two-acre site.

The terrazzo contractors’ first task was to render the existing substrate suitable for the new terrazzo installation. They used an epoxy injection system to reinforce buried timbers that were deteriorated but couldn’t be removed. The substrate was then floated over with extensive epoxy mortar floor patch, moisture vapor treatment and epoxy crack isolation membrane. Expansion joints were cut to accommodate any future movement. 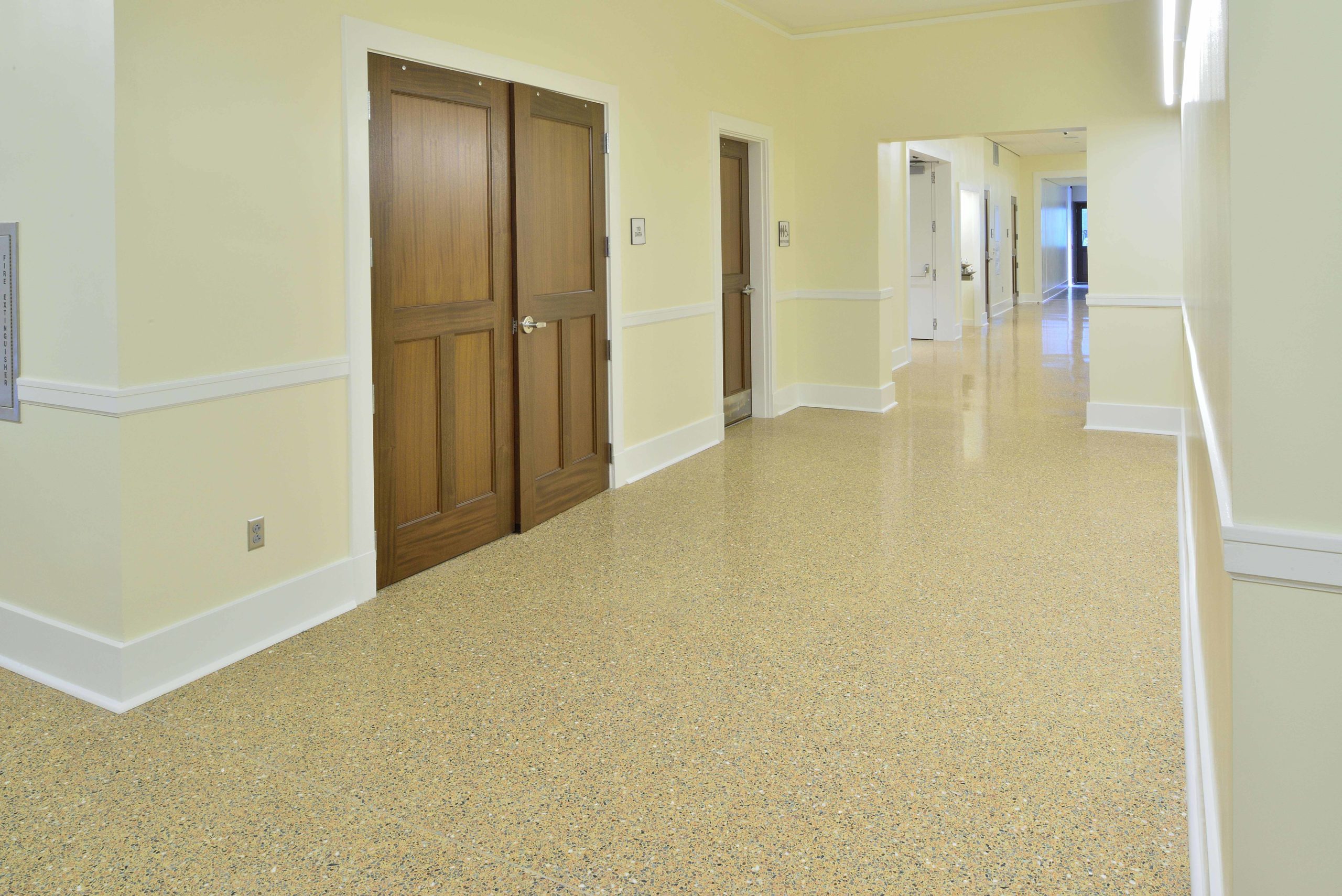 For example, in Maumus Center’s renovated auditorium a simple brown terrazzo floor approximates the look of a wood floor while standing up to moisture as well as rolling bleachers. While adding interest, the floor also kept the focus on the ornate ceiling.

In the center’s new addition, white floors with gray, silver and mother-of-pearl aggregates set a distinctly modern tone. In other areas, a natural green tone complements the existing wall finishes.

“I don’t think any other material would have integrated as well and withstood the traffic,” said Ms. Palumbo, noting also that New Orleans-area schools districts insist on water-resistant finishes.

Mr. Wehrlin, with 33 years experience as a construction project manager, noted that “almost every job has terrazzo now. Public buildings—schools, hospitals, airports—want something to last 50 to 60 years.”

The Maumus Center project encompassed nearly the full gamut of terrazzo systems; as Ms. Palumbo likes to say, there was “one of everything” on the job. Both epoxy and traditional cement terrazzo are used on the flooring and stair treads. Epoxy terrazzo work included a three-eighths-inch system on the first and second floors, with four-inch and six-inch straight precast base, flat and radius. Epoxy terrazzo precast sheets also were installed as wall cladding. The curved reception desktop was pre-fabricated in the contractor’s shop, then installed and polished to 3000 grit natural finish on site.

Further ingenuity was called into play to construct the self-supporting, monumental terrazzo stair. Without access for cranes or forklifts inside of the original structure, the contractor resorted to a series of extension booms, walk-behind lifts, and gravity roller conveyors to install the 800-pound sections of precast terrazzo stair treads and landings, rather than attempting to man-handle the pieces or building a scaffold and pulley system.

“It was exciting to work on something so rich in history and yet be so advanced in its next intended use, while also having the opportunity to install so many different terrazzo systems on the same project,” said Clyde Martin, owner of Terrazzo Masters.