The oldest park in Houston and one of the oldest in Texas will remain relatively silent again this year on Juneteenth, its principal holiday. In the wake of COVID-19, virtual events have replaced the festive in-person celebration. 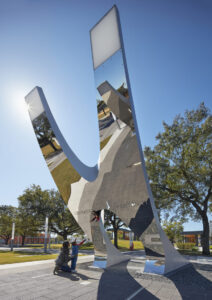 After a decade of decay and neglect, the historic Emancipation Park had renewed its Juneteenth celebrations in 2017 with a rededication ceremony and the unveiling of its extensive redevelopment. A new pair of sculptures in chrome, abstractions of hands uplifted in welcome and celebration, symbolizes its rebirth in view of a brighter future. The iconic park’s LEED-certified renovation is the culmination of a concerted effort over many years. The restoration rallied a group of determined forces to invest in the preservation of the historic landmark and its message of hope. Today, the facility in Houston’s Third Ward stands again at the ready for both active service as a community center and as a monument on the long road to freedom and full equality for African Americans.

Emancipation Park’s renovation has been highly lauded. Recognitions include six AIA and Urban Land Institute awards as well as an Honor Award from the National Terrazzo & Mosaic Association in 2018 for the park’s striking installation of terrazzo in a stately palette of white and gray tones. 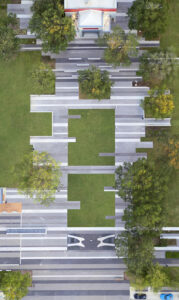 The project is also one of the final legacies of architect Phil Freelon, FAIA, a prominent African-American architect who devoted his considerable skills to honor the progress of civil rights. Mr. Freelon was the lead architect for many of the nation’s major sites dedicated to retelling African-American history.

The design concept for Emancipation Park’s renewal is an interwoven tapestry of buildings and landscape. The metaphor speaks of bringing forward the past and making it a constructive part of both the present and progress into the future, explained Kenneth Luker, Design Principal with Perkins and Will in Durham, NC. The banded terrazzo pattern extends to the exterior plaza scape, reiterating the shape of the structures and the pool and unifying the entire complex.

“As we engaged the community, we learned the challenges and aspirations of that part of Houston, and the park’s role in this neighborhood,” Mr. Luker related. “The park was originally designed to celebrate community and progress; we were able to tell that story afresh through architecture.”

Phil Freelon founded The Freelon Group in 1990 and was the studio leader during the 2013-2017 redesign of Emancipation Park. The Freelon Group joined Perkins and Will in 2014. Phil Freelon passed away at age 66 of ALS, or Lou Gehrig’s disease, on July 9, 2019. In the words of US congressman and civil rights leader John Lewis, Phil Freelon “immortalized our culture in steel, glass, and stone.” Two years before his death, Mr. Freelon received his state’s highest civilian honor: the North Carolina Award.

“Phil was our North Star: he led the studio, establishing a culture of design excellence, inclusivity, and social equality,” recounted Mr. Luker, who joined the Freelon Group in 2006 and later became a principal and lead designer.

When the Freelon Group was established, very few design practices were led by African Americans, Mr. Luker explained. Mr. Freelon recognized that underserved communities were also historically under-represented for design excellence. One of the firm’s main objectives was “to champion excellent design in any community and to bring awareness that all deserve great design.”

Today the North Carolina studio of Perkins and Will works with marginalized communities all over North America, from Austin to Vancouver, Los Angeles to Miami and Detroit, Mr. Luker said. They call what they do “Remembrance Design”: helping historically marginalized and underrepresented communities manifest their history through architecture and design, to strengthen these communities and help them reshape their futures. The Emancipation Park project was a fulfillment of that mission.

As Design Principal for Emancipation Park, Mr. Luker asserted the importance of the full design team’s collaboration in completing the project. “Design is not a solo act,” he said, crediting team member Edwin Harris for most of the day-to-day design on the project, along with Dennis Freeland, Teri Canada, and Anna Marich.

The 1939 Emancipation Park building renovated in the project was an effort of the American New Deal Work Projects Administration. It was designed by prominent Houston architect and founder of Rice University architecture department William Ward Watkin (1886-1952). Watkin also designed Houston’s Museum of Fine Arts and original public library in the early 1920s. 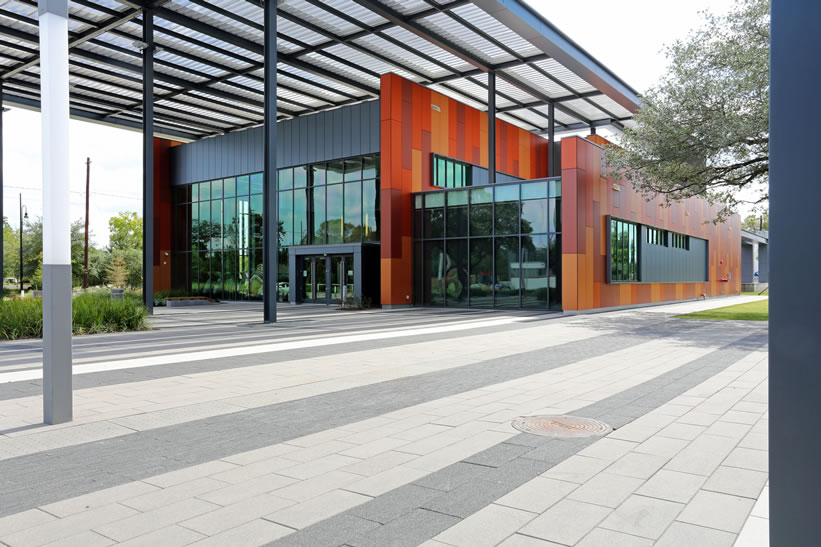 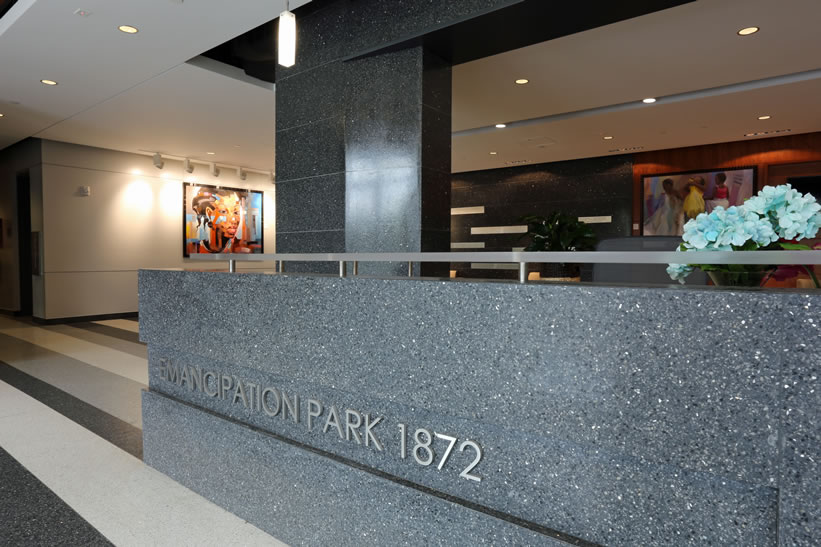 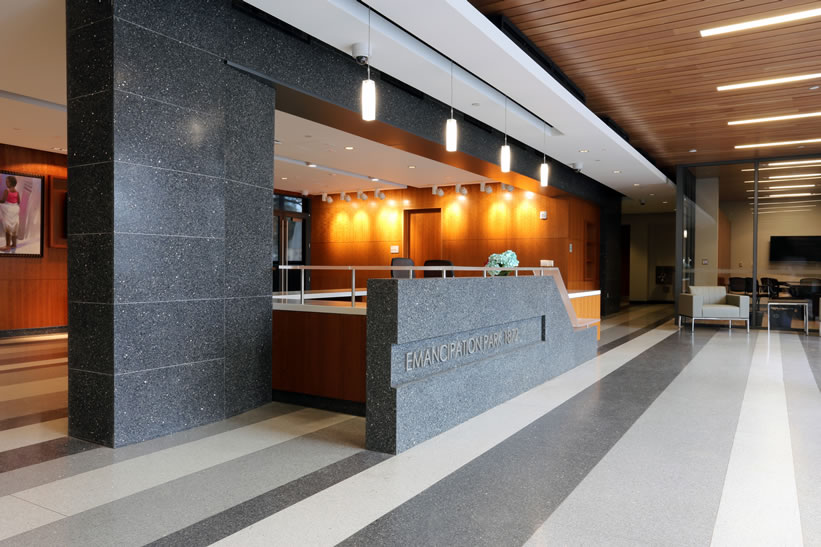 As part of the renovations, a monument was installed in each corner of the park in honor of its founders. In 1872, Richard Allen, Richard Brock, Jack Yates, and Elias Dibble, formerly enslaved individuals, combined forces and $1,000 to exercise their newly won rights to own land. They named the 10-acre site Emancipation Park; its primary purpose was hosting community celebrations of what came to be known as Juneteenth.

Today Juneteenth is gaining recognition as a US holiday. It commemorates June 19, 1865: the day federal troops reached Texas, the westernmost slave state, to inform slaves of the news of the Emancipation Proclamation made two years earlier.

Emancipation Park was donated to the City in 1916 and became a municipal park in 1918. During the era of segregation, it was the only municipal park and pool open to African Americans. Over the years, the site has hosted countless concerts and Juneteenth celebrations.

In the 1970s, the park fell into disrepair and neglect. By 2007, Juneteenth celebrations there had ground to a halt.

Friends of Emancipation Park began a movement in 2006 to revive the park and its original purpose. The Houston City Council gave the project additional support the next year by naming the park a historic landmark.

Starting in 2011, the City began working on a capital campaign to revitalize the park. Seeding the project with a $2 million allocation, the city was joined by the local government corporation OST/Almeda Corridors Redevelopment Authority, Texas Parks and Wildlife Department, and many others, who are acknowledged on the terrazzo donor wall in the park center.

The project broke ground in 2013 and the park reopened on Juneteenth 2017. The City also changed the name of the street in front of the park from Dowling Street, which honored a Confederate officer, to Emancipation Avenue. Emancipation Park was designated a UNESCO Slave Route Project site in 2019.

The City of Houston with OST/Alemeda Corridors Redevelopment Authority selected terrazzo for its longevity, durability, and ease of maintenance. Local terrazzo contractor Southern Tile & Terrazzo, Co., a member of the National Terrazzo & Mosaic Association, was chosen to complete the installation.

A distinctive feature of the project is the use of terrazzo on vertical surfaces in the facilities. Terrazzo panels clad the reception desk, walls, and donor recognition wall. The terrazzo contractor produced the panels in their shop. A total of 1,500 square feet of precast panels in various sizes are connected with terrazzo strips that were hand-ground on site.

The three-toned terrazzo design is a blend of glass, marble, and mirror aggregates with zinc divider strips. The flooring is complemented with 850 linear feet of precast terrazzo base. “Specifying terrazzo contributed to LEED Gold certification, notably with its durability and with the ease of maintenance of the interior,” Mr. Luker said. “It’s a fantastic material—it lasts forever, as we learned from Italians—as well as for artful floor designs that help tell a story.”

Thanks to the momentum built in Emancipation Park’s redevelopment, the Third Ward is now making strides in neighborhood renewal. The park has a promising future in its role in the march of progress. Next year, hopes are high that this historic site will be ready to renew a joyful observation of Juneteenth. In 2021, the traditional festive passage into the park may celebrate greater peace and justice for all.

Looking ahead through the current unrest, Mr. Luker hopes to see positive change as we become better and stronger as a nation. “It’s important to know where we’ve been and where we’re going,” Mr. Luker noted. “There’s still progress to be made.” 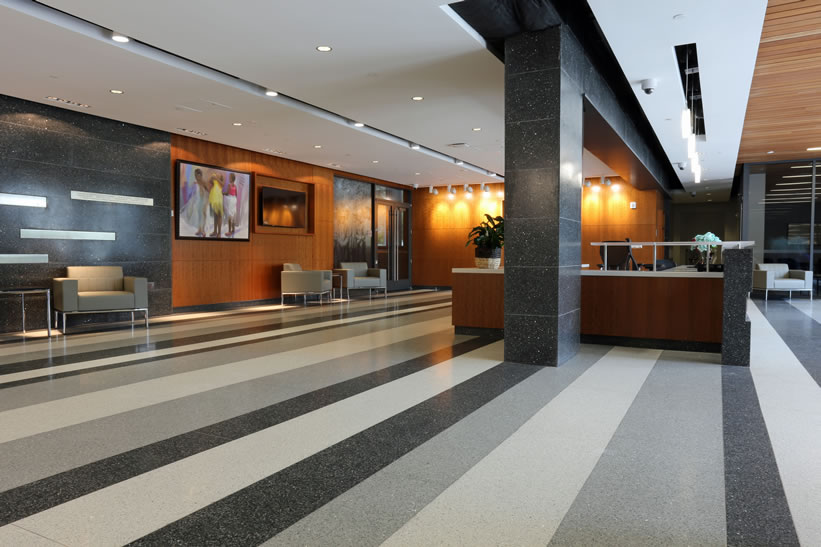 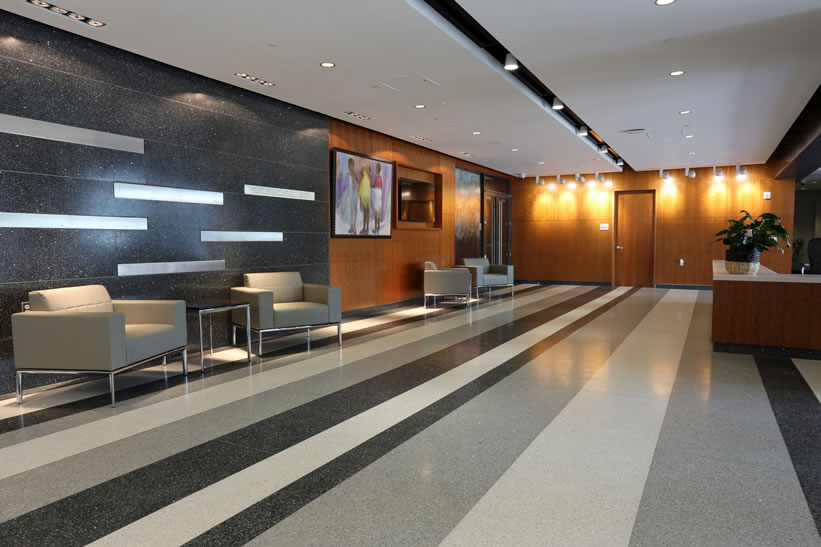 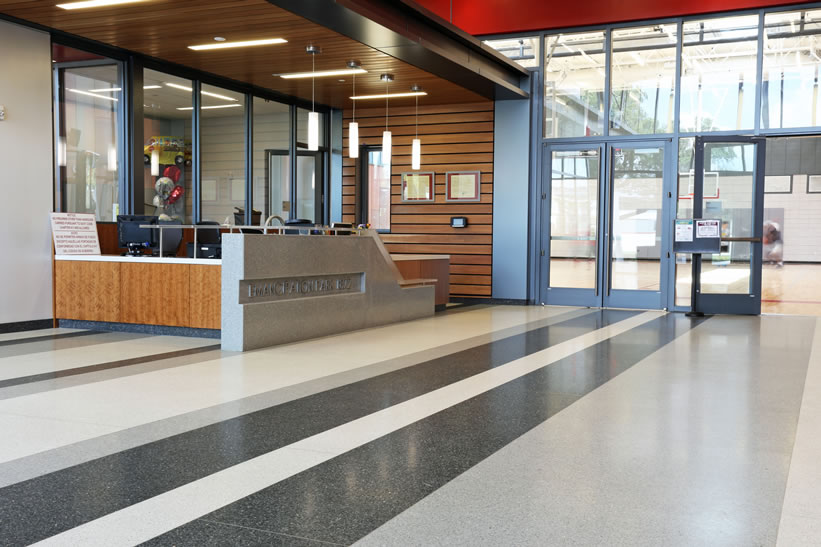 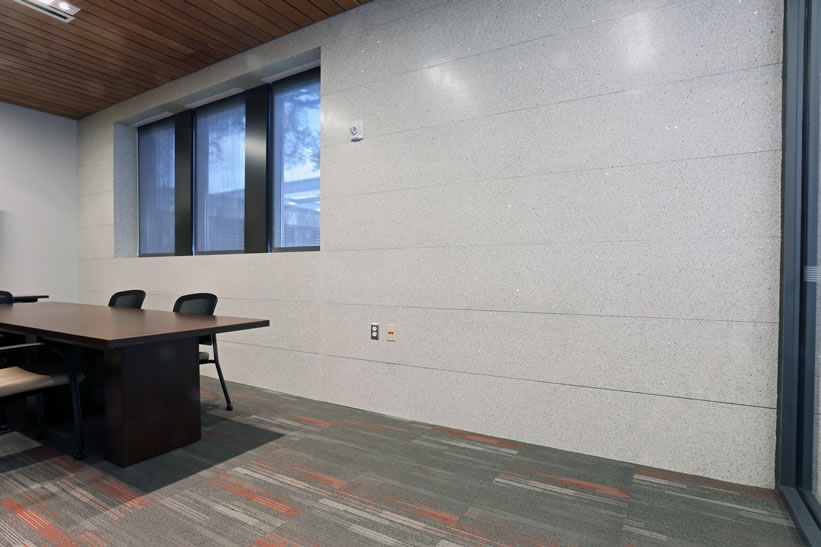 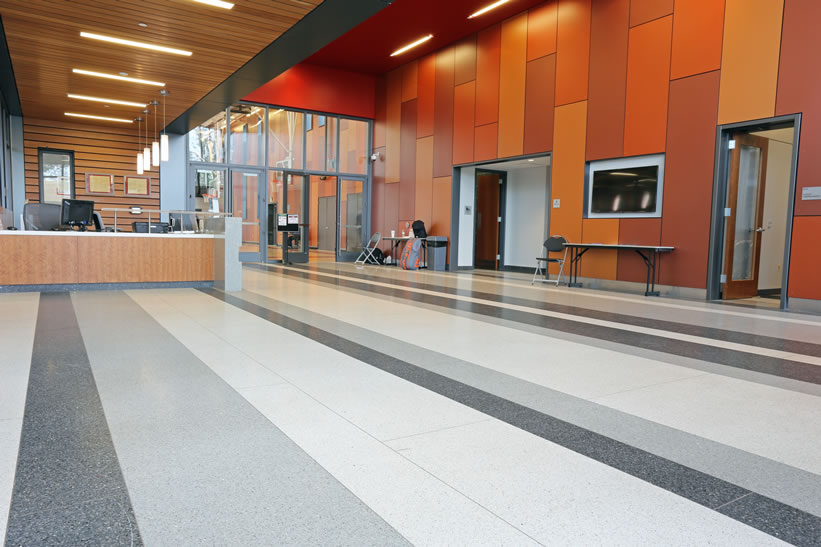 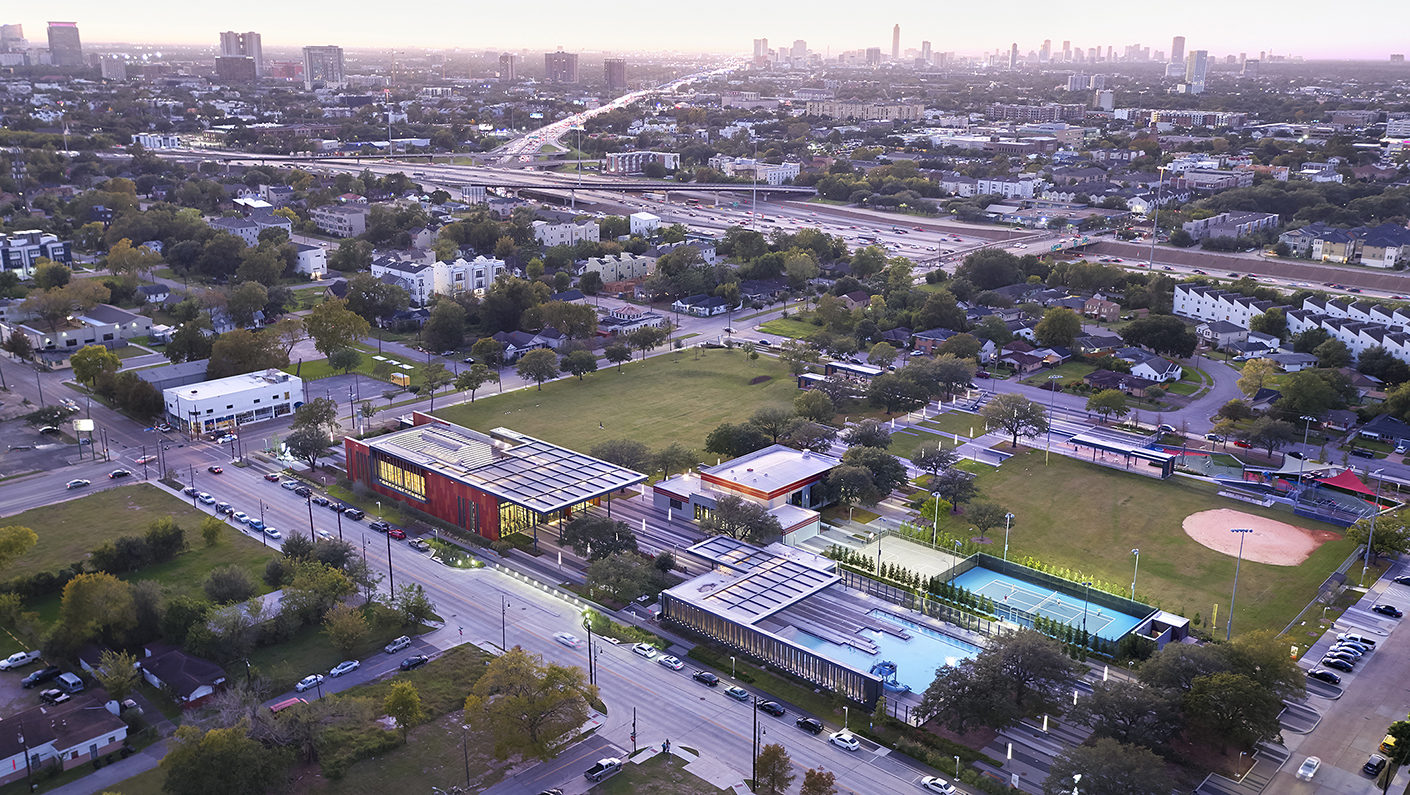 Photos courtesy of Perkins and Will and NTMA – Mark Dean Photography, Spring TX