When four historic courthouses in the Pacific Northwest mark their centennials, they have something else to celebrate: 100 years of solid value and embodied energy in their historic Terrazzo floors.

One of the lessons the history of these buildings teaches us is the value of using materials that last.

“Terrazzo was obviously a good choice because 100 years later we are still using it,” Nielsen noted.

“On the whole, these floors are in really great shape and look great,” she said. “We feature them and maintain them. We are proud of them.”

In recent Building Preservation Plans of each historic courthouse, the original Terrazzo floors were generally rated a significant contributor in the hierarchy of preservation concerns in the structure’s historic significance. These 100-year-old floors were also generally rated in good-to-excellent condition. Through the years, the floors have required only repairs of chips or minor cracks and an occasional resealing, along with routine maintenance, to keep them functional.

“The terrazzo is in great shape,” Nielsen explained. “We fix up the cracks and we maintain it. There’s certainly no reason to replace it. It’s working just fine.” 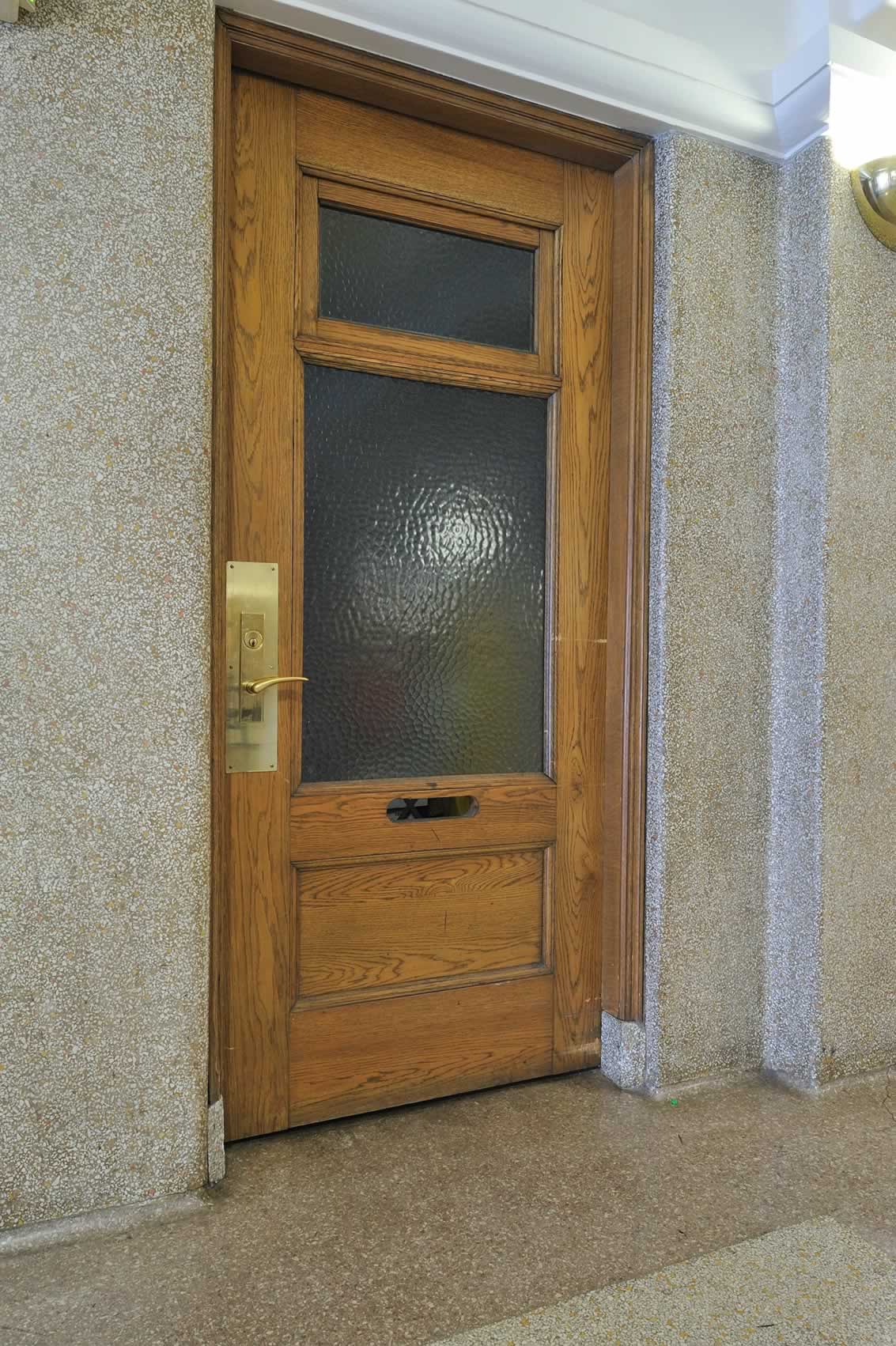 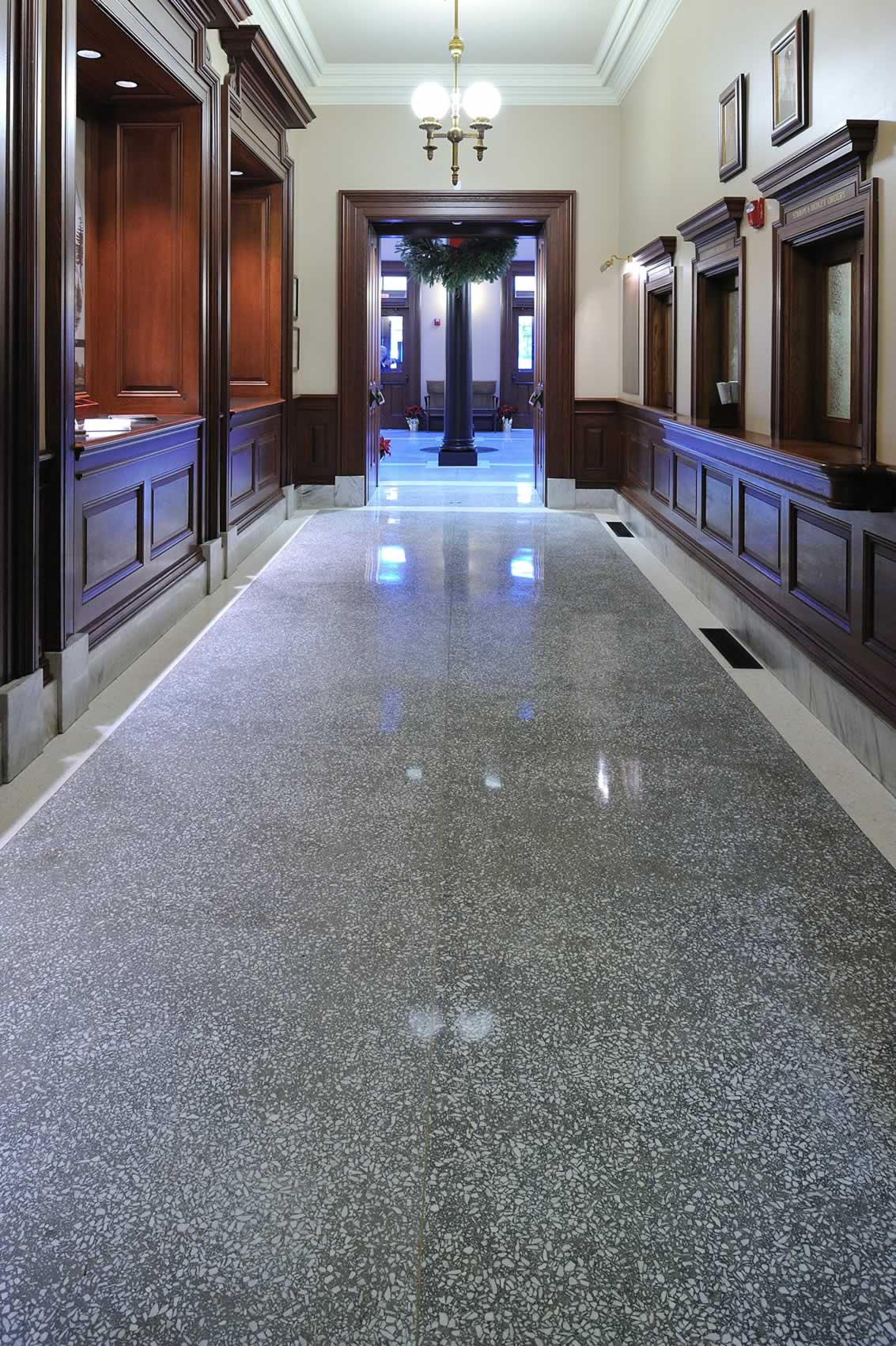 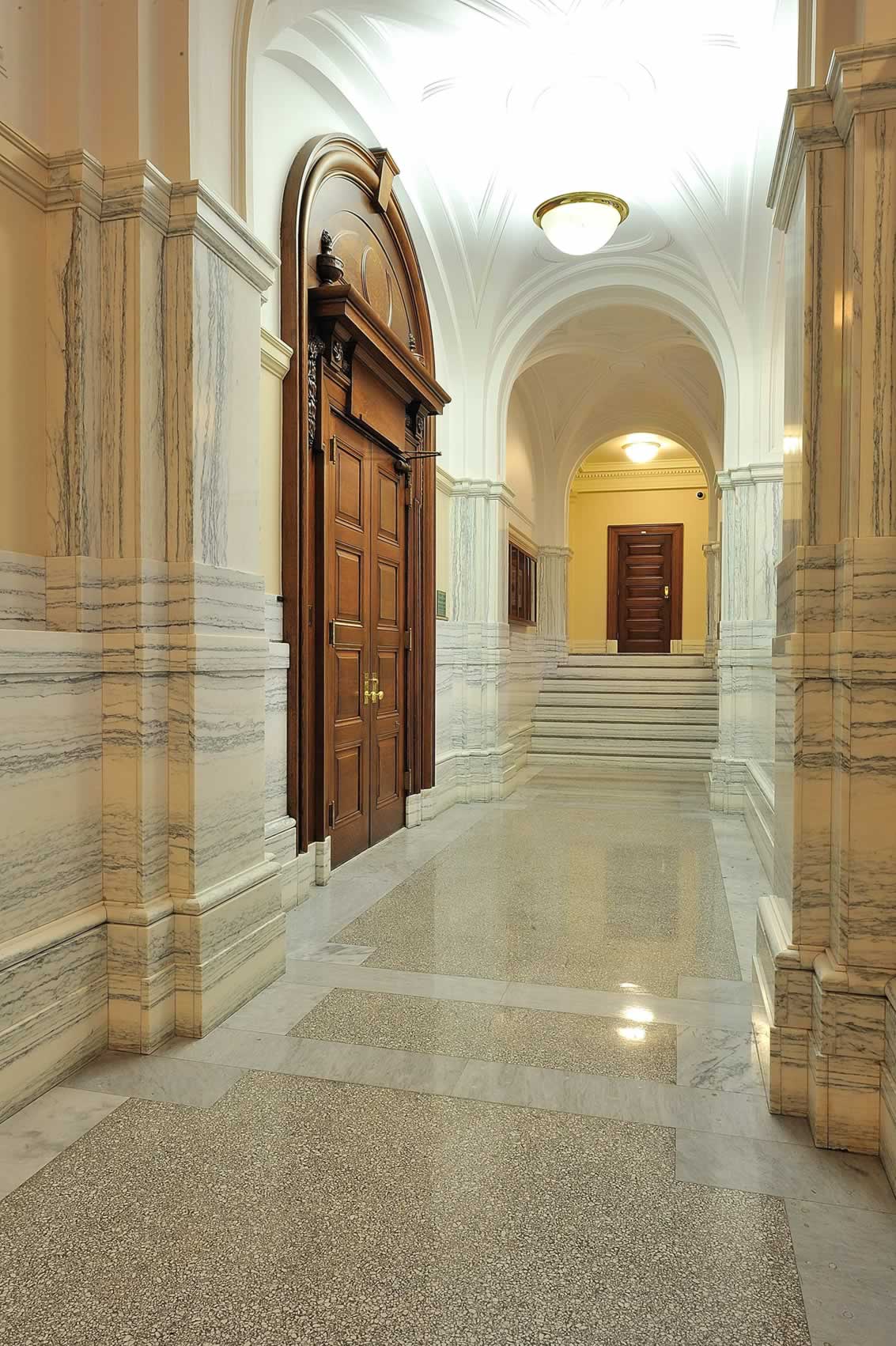 Terrazzo was chosen for turn-of-the-century grand public buildings “because it worked so well,” Nielsen explained. “It’s easier to maintain and clean than wood, and it takes a lot to damage it. It takes a whole shift in the building. Wood can be damaged easily if you drop something on it.”

The flooring of choice for places open 24/7, such as post offices, “terrazzo stands up to just about anything,” according to Nielsen. “As an added benefit, it’s pretty. The designs and colors possible are limitless.”

Today, use of Terrazzo makes the same sense as it did in the day of these historic courthouses, and even more because of the awareness now of the environmental impact of building choices. Government standards are also now reinforcing the use of materials that last and conserve resources long term.

One of the earliest, original recycling ideas, Terrazzo began as the creative reuse of leftover chips of marble some 600 years ago in Italy. Terrazzo was green before green was trendy.

“Except for occasional resurfacing and cleaning, once Terrazzo’s in, it’s there. It stays forever,” Nielsen said.

“No energy is expended replacing it or getting rid of it,” she said. 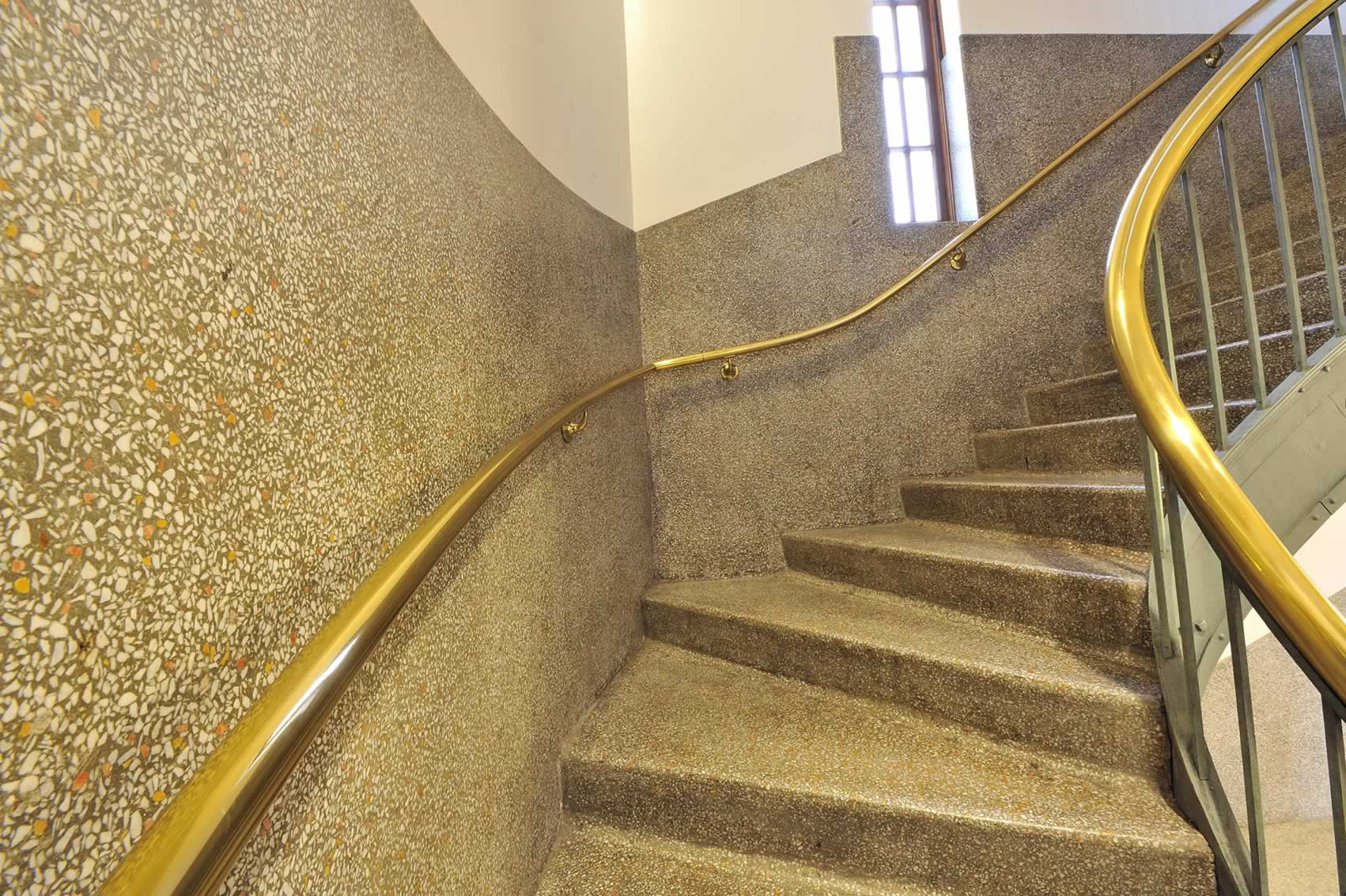 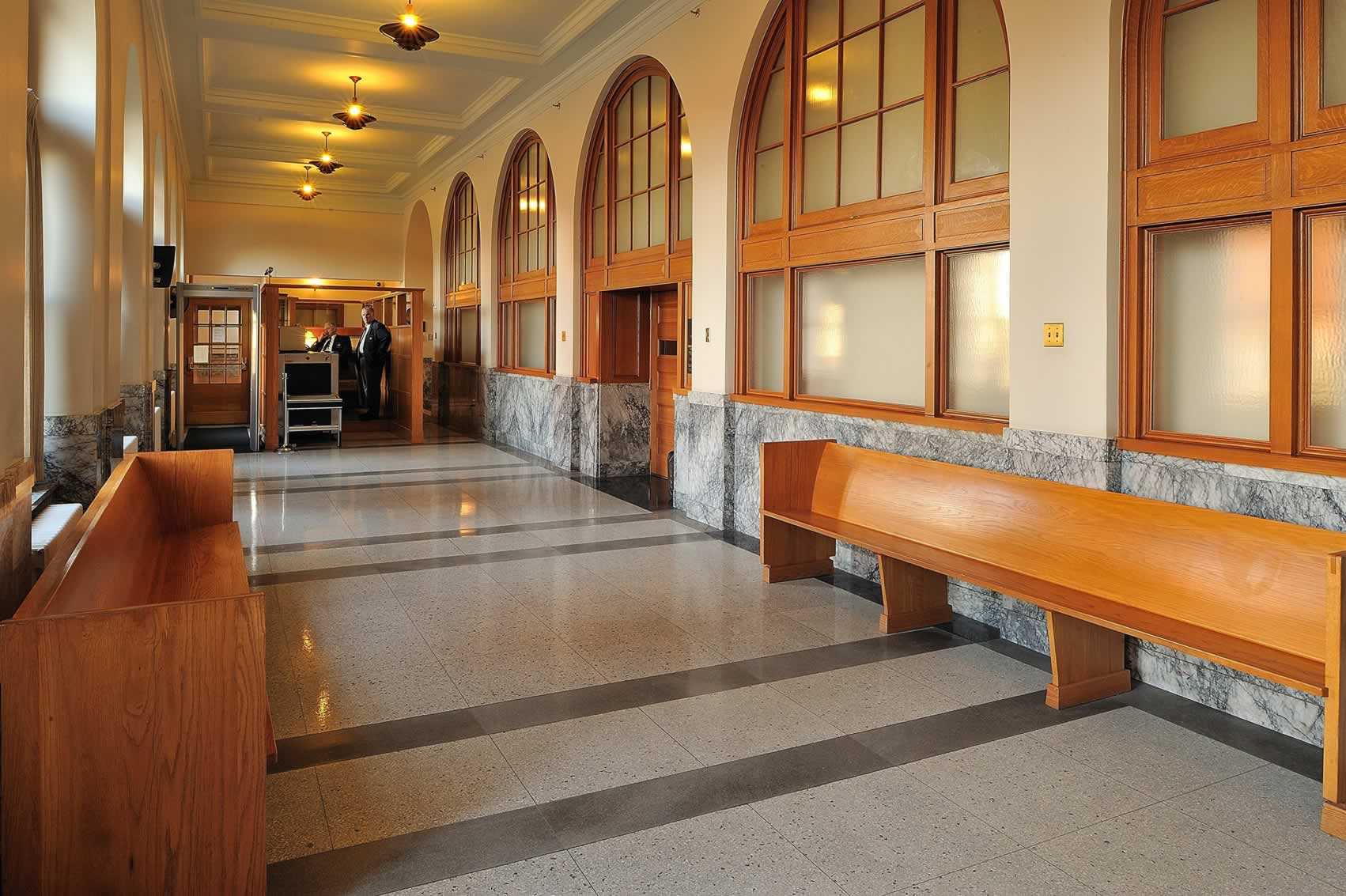 How Ageless Beauty Shows its Age

Widely considered the most historically significant building in the Pacific Northwest, Pioneer Courthouse in Portland, OR, was completed in 1875. Pioneer Courthouse is the oldest federal building in the region and the second oldest courthouse west of the Mississippi. Restorations were done in 1969-73 and again in 2002-05. With a distinguished Italianate design, it was designated a National Historic Landmark in 1977.

Terrazzo floors were installed in 1905, replacing tiles and wood, along with a major remodel and expansion.

The only signs of age in the Terrazzo today are slightly worn down spots in front of the post office windows where people stood in line for 40 years, and a couple of settlement cracks, Nielsen reported. “Otherwise it doesn’t look worn. You can’t tell it’s 100 years old.” 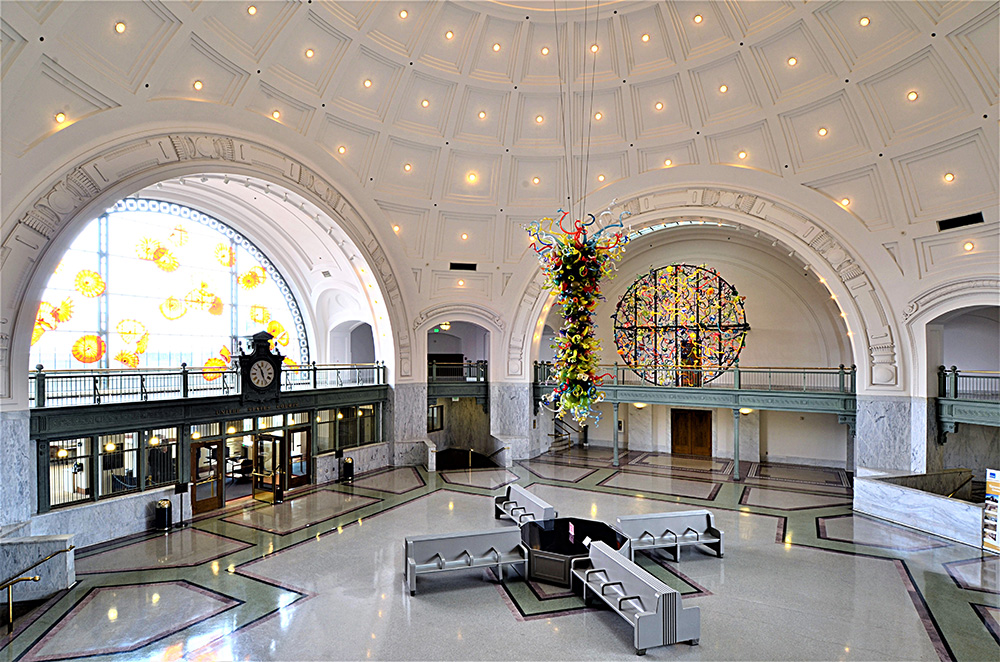 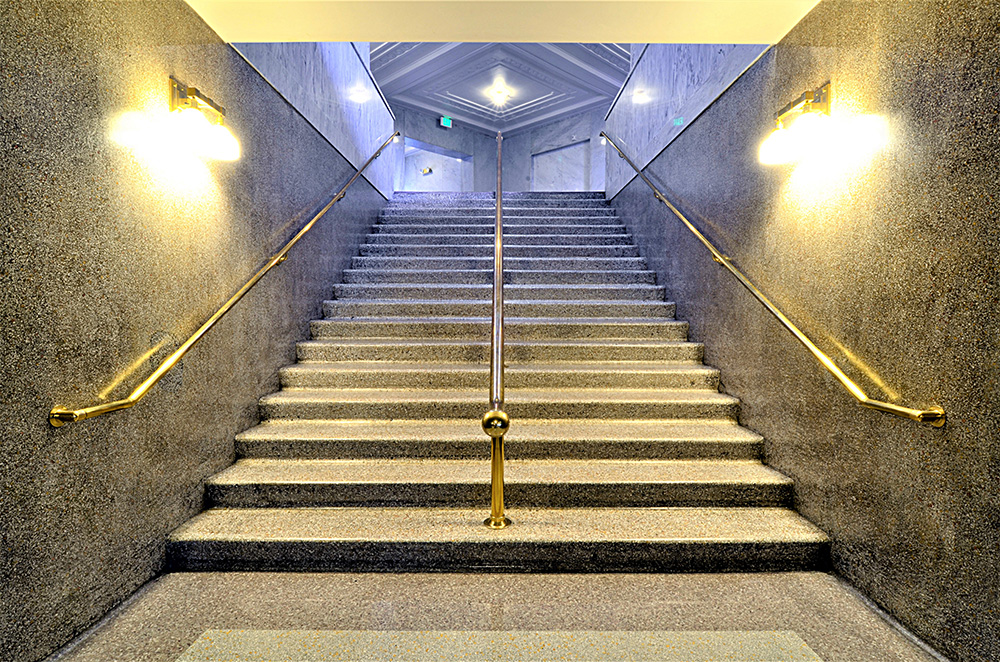 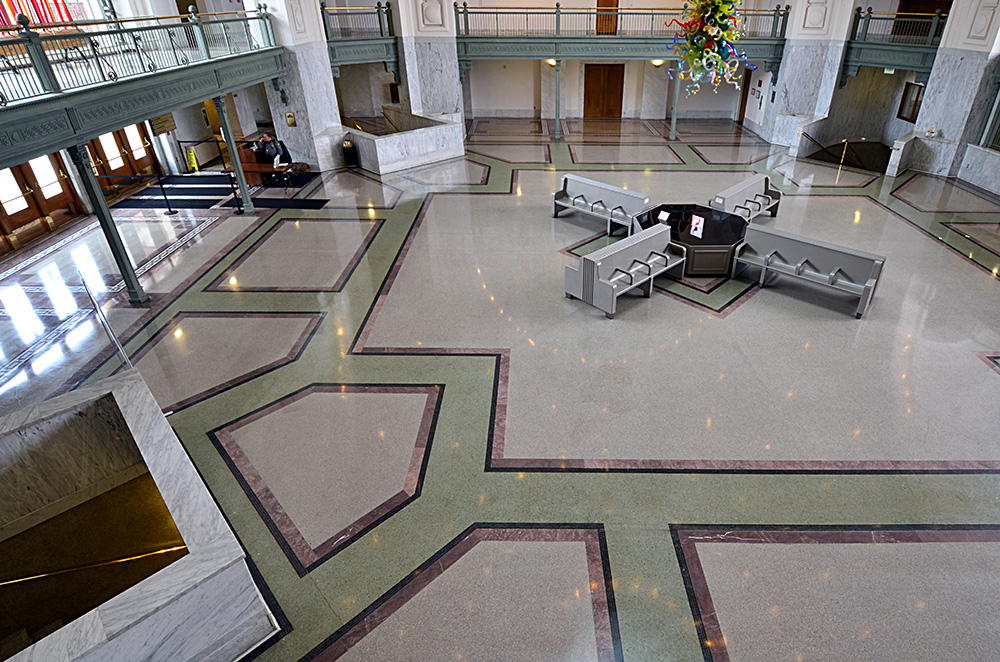 Where Less Maintenance is More

Terrazzo can contribute as many as five LEED points for a public art project, based on its durability, low VOC emissions in installation and maintenance, reclaimed and local materials and building reuse.

Originating in 15th-century Italy, terrazzo flooring techniques descended directly from the mosaic artistry of ancient Rome. An early green building system, terrazzo evolved from the resourcefulness of Venetian marble workers as they discovered a creative reuse of discarded stone chips. Terrazzo techniques were introduced to the US in the 1880s by Italian craftsmen.

In keeping with its original premise of resourcefulness and efficiency, terrazzo is still manufactured on the construction site. Marble, stone or glass aggregates, which can often be found locally, are embedded in a cement or epoxy base, filled in and polished.

Built to Last, Built to Impress

“The building was built to last and built to be impressive,” Nielsen explained. “It’s really beautiful with lovely details.”

Corridors in second through fourth floors combine Terrazzo and solid marble in a geometric pattern. In 1994, the historic floors were repaired and leveled by resurfacing. In 2004, the building won The Office Building of the Year Award in the historic category from the Building Owners and Managers Association Northwest Region.

When carpet was removed in Yakima’s 1912 William O. Douglas Courthouse in 2009, the original Terrazzo underneath was declared “in relatively good condition considering the age.”

Minimal cracking and some deep scratches were found. The main problem was the countless small holes from the mechanically fastened carpet tack strips. Careful color matching is recommended, but the historic floors will need only minor repairs and refinishing.

Today’s trends are back to more permanent, forward-looking building standards and greater initial investment in building well in order to conserve resources long-term. The concept of green is in part just a new way of talking about going back to the use of what has proven to endure and perform.

Construction is one of the number one things that contribute to carbon emissions, Nielsen said, “We keep things up; we don’t get rid of things that have cultural value and other value.”

Nielsen is celebrating not only the lifetime of efficiency and beauty of the centenarian courthouses under her watch, but the movement toward greater sustainability in construction, backed by federal standards. 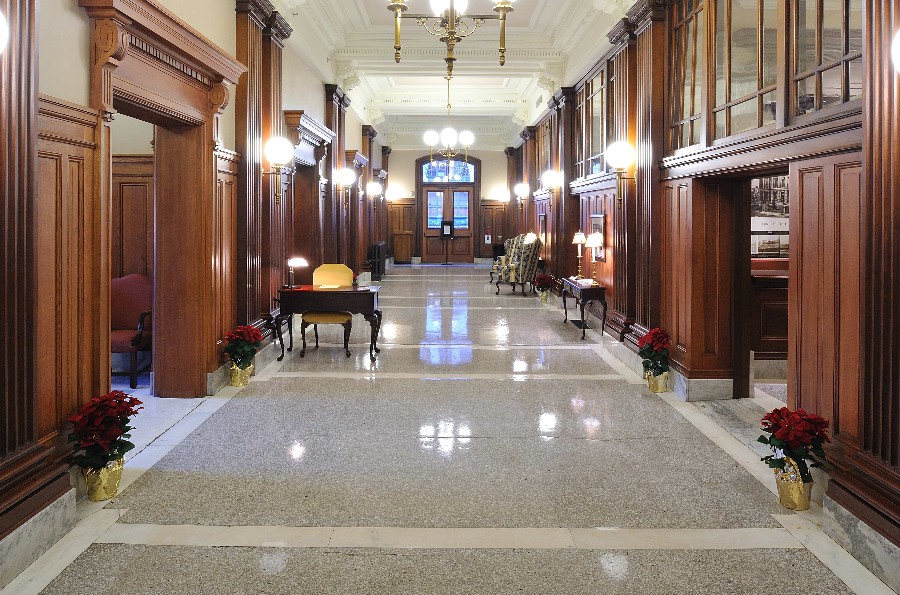 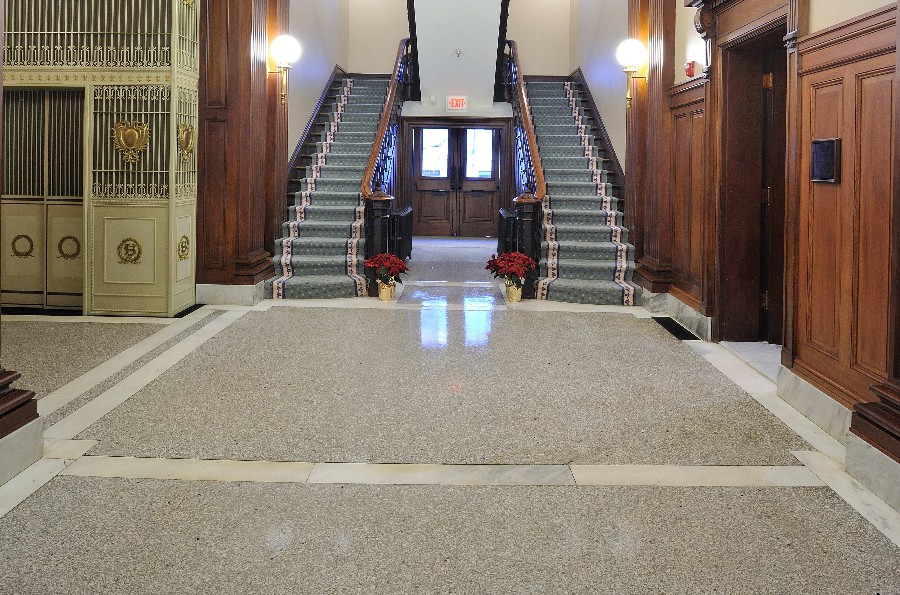 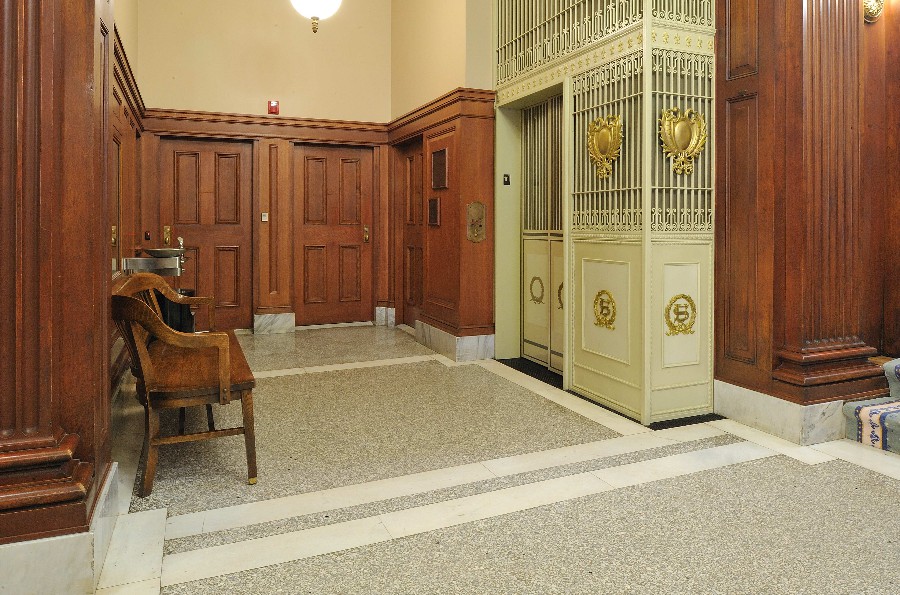 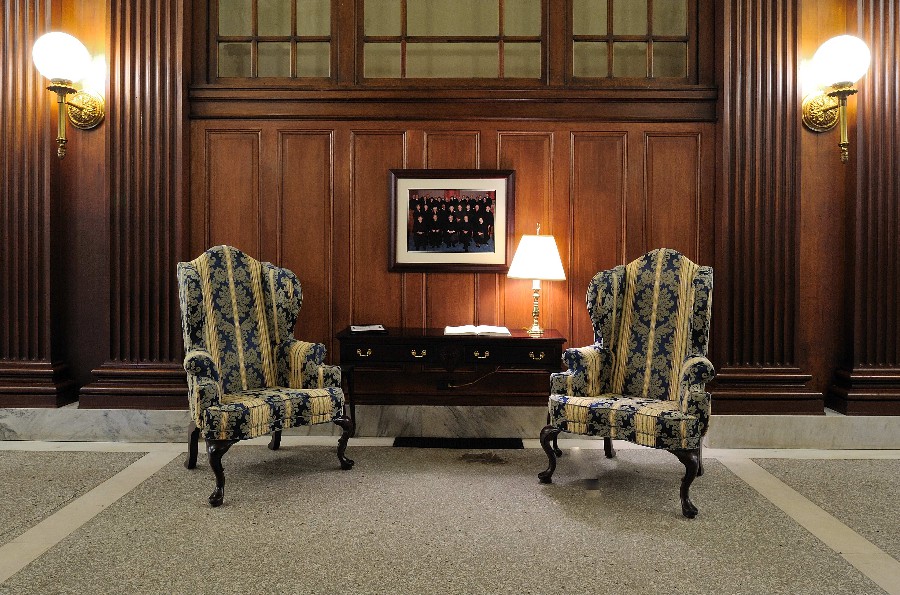 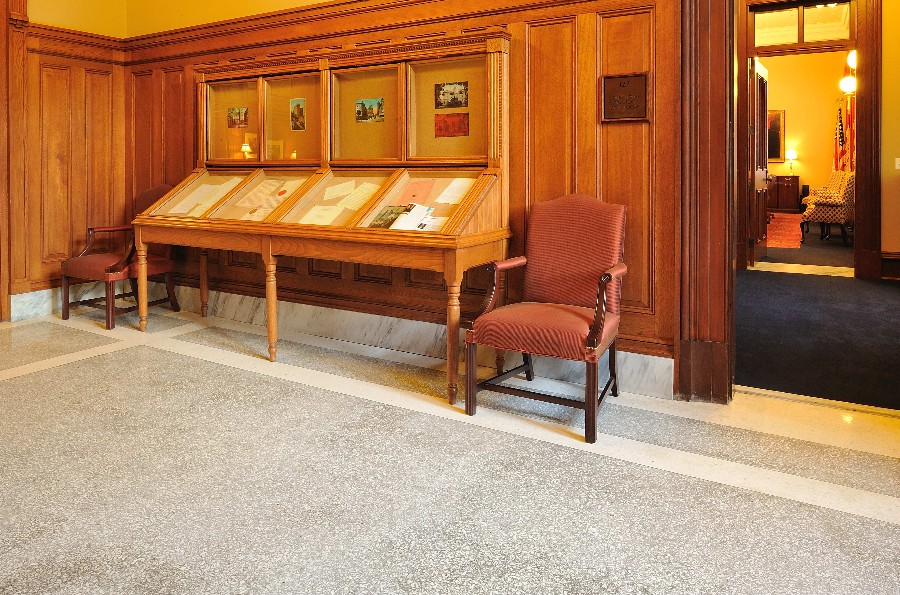 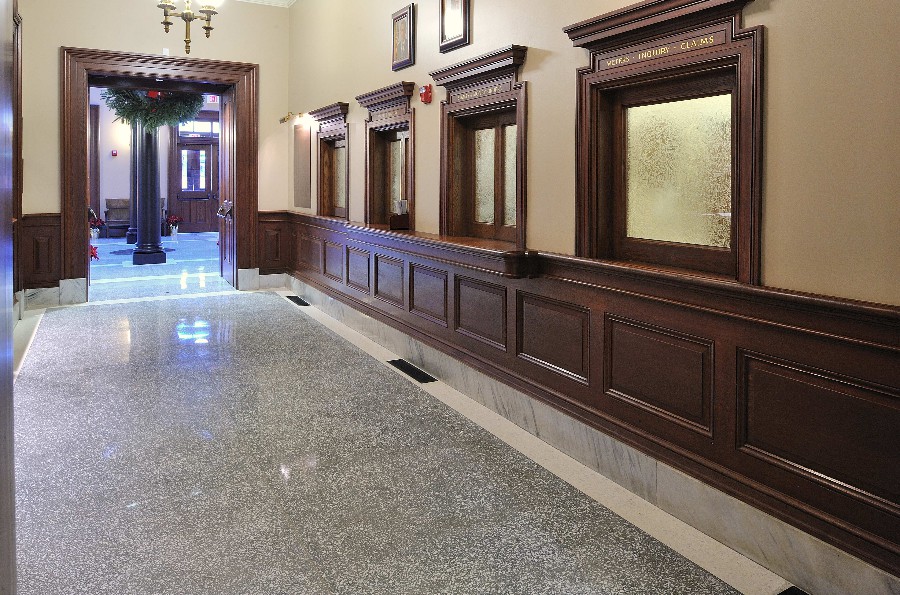 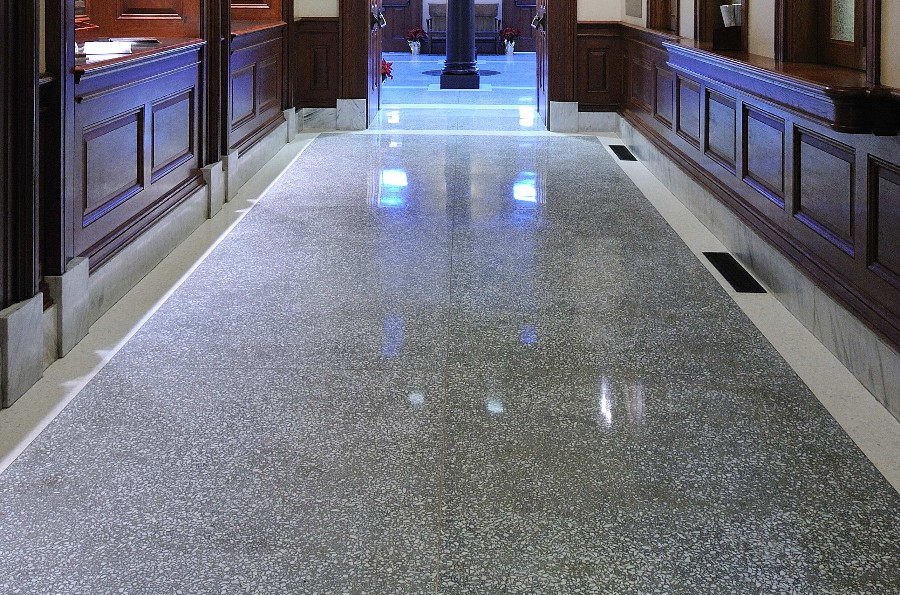 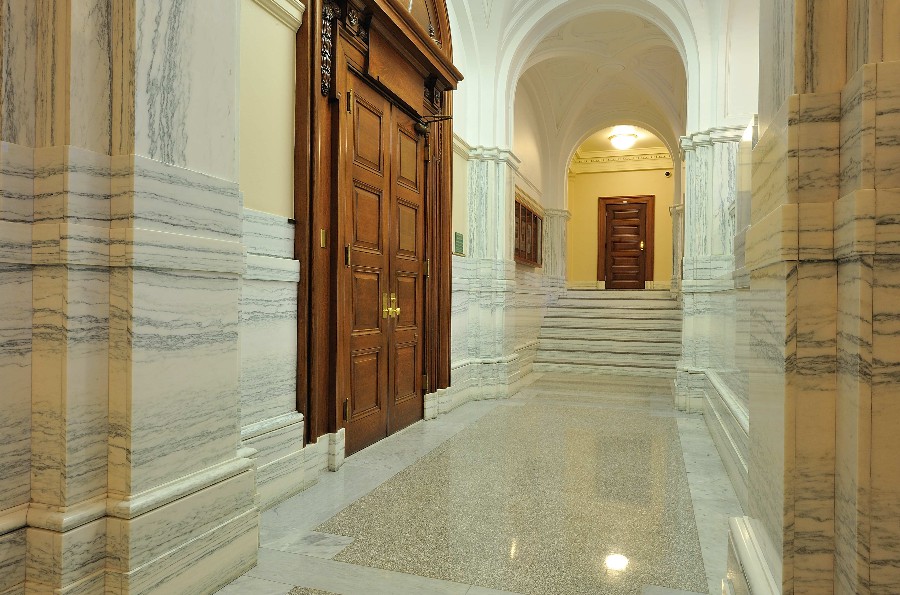 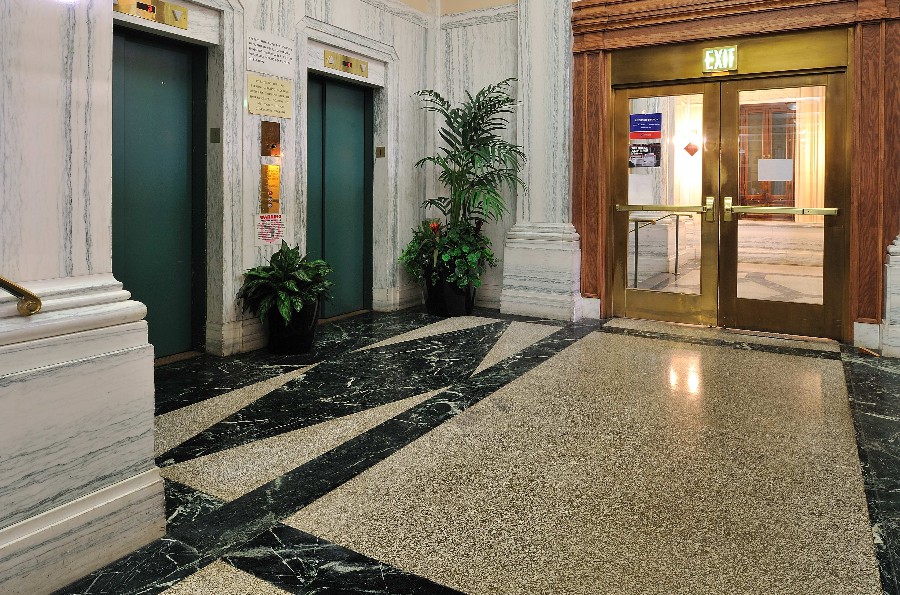 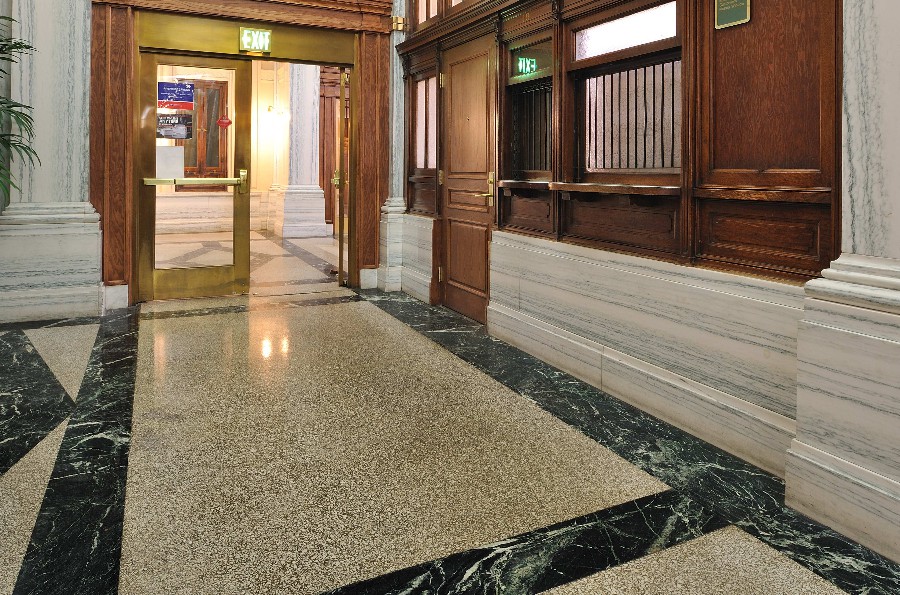 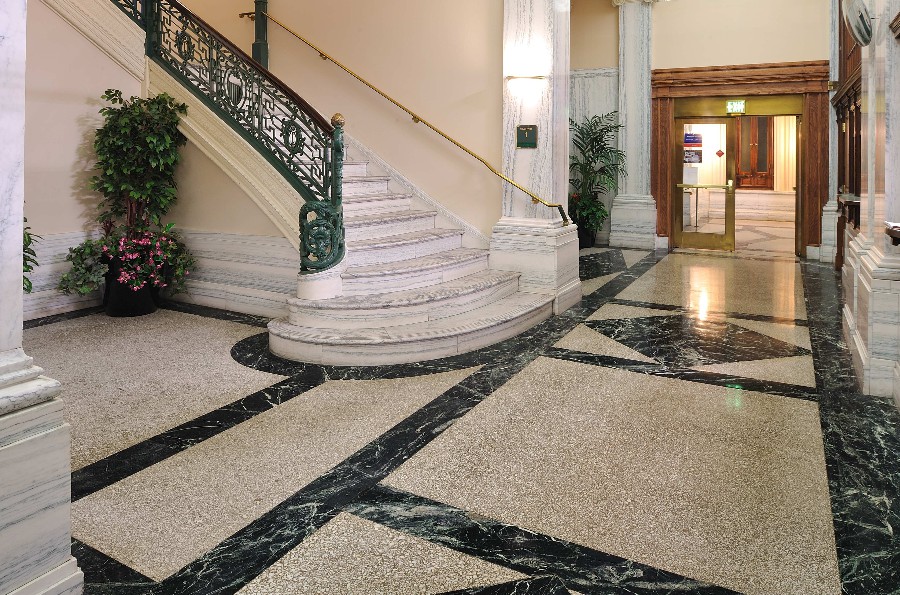 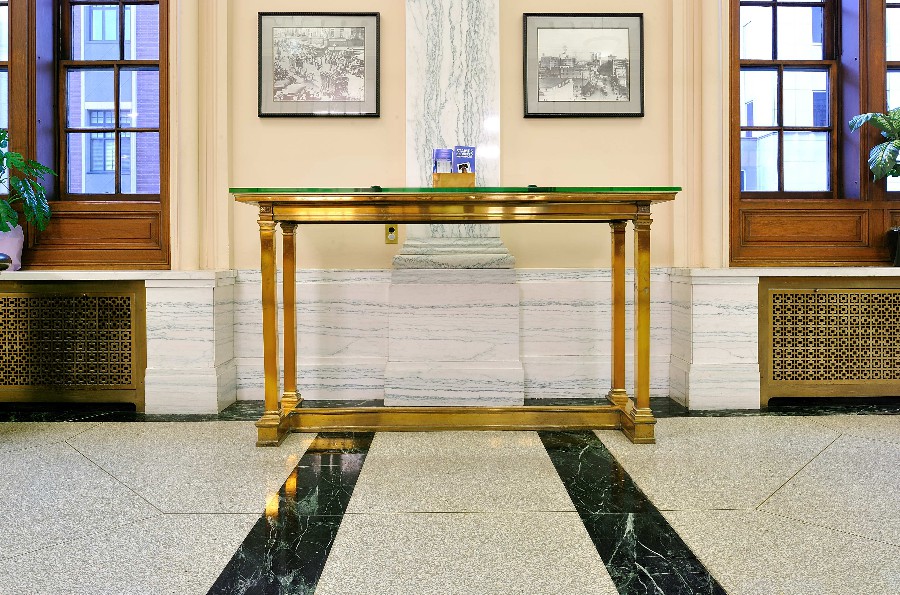 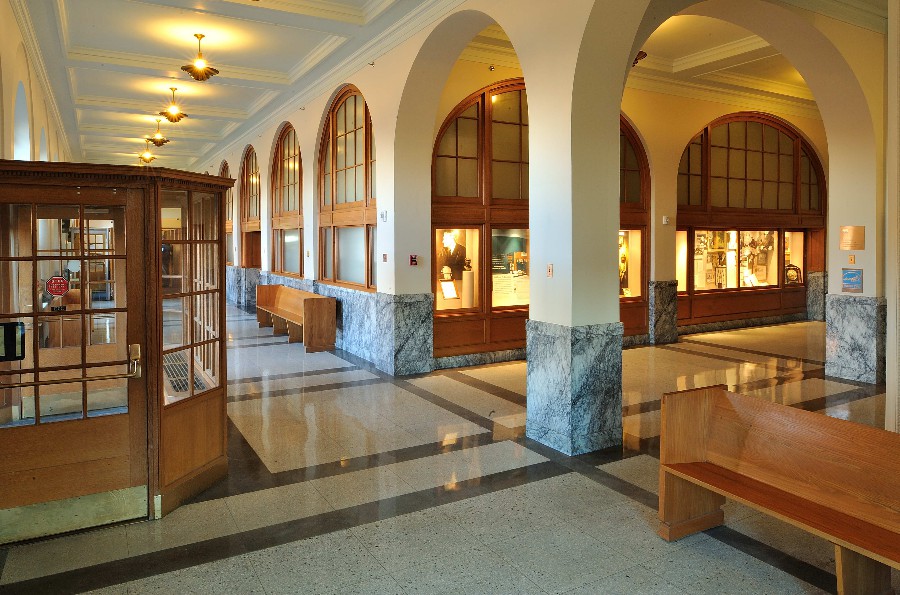 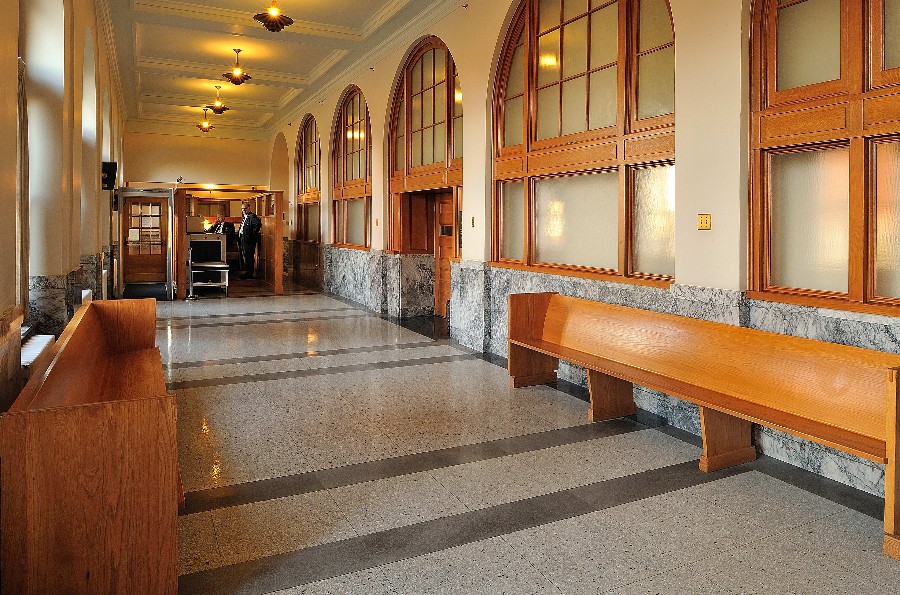 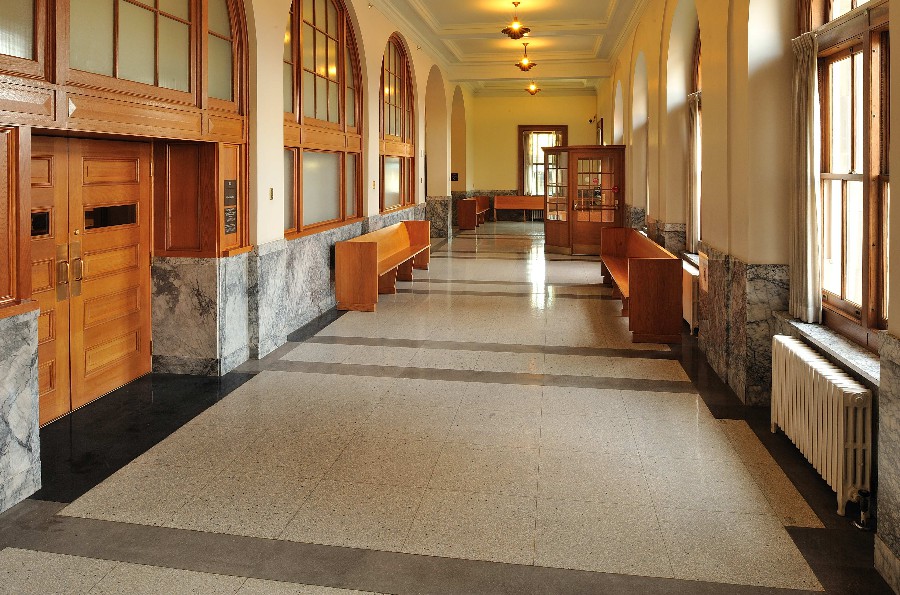