Trading still goes on in the 1930 landmark still known as the Chicago Board of Trade (CBOT) building in downtown Chicago, though most trading is done electronically nowadays and the CBOT itself is now just another tenant there at 141 West Jackson Boulevard. The iconic example of American art deco designed by Chicago architectural firm of Holabird & Root has held onto its classic good looks, and certain other changes have been intentionally less visibly obvious. A Chicago Landmark, a National Historic Landmark and listed on the National Register of Historic Places, the structure that held the title of the city’s tallest skyscraper until 1965 is still crowned by its blank-faced three-story statue of the goddess of agriculture.

Since the building was purchased by a consortium of real estate investors in 2012, some $30 million have been invested in upgrades. The CBOT building is today both a prime example of elegant historic preservation and a premium tenant location with fully up-to-date functionality. Regional and local 2014/2015 BOMA TOBY Awards in the Renovated Building Category are among the latest recognitions of the building’s long tradition of exemplary stewardship. With the addition of scalable infrastructure and the building’s historic public spaces now expanded and made accessible to the public once again, no trade-off is asked of either tenants or preservationists. 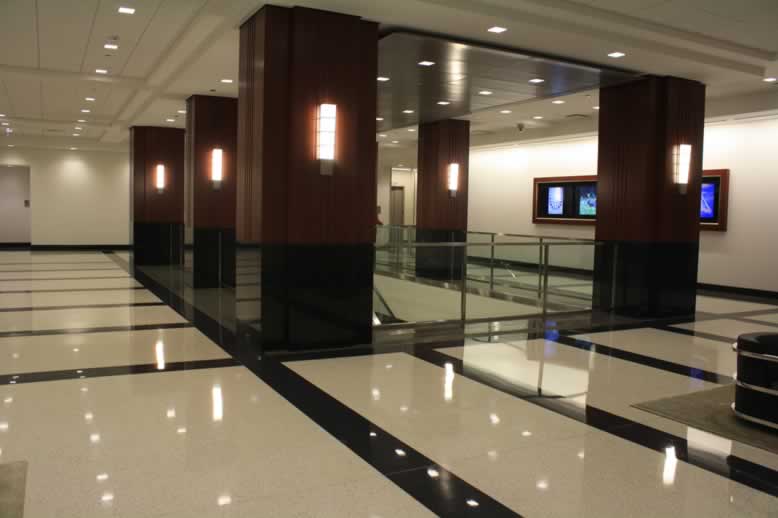 “What you don’t see in pictures of this renovation is what went into the planning, and the challenge of the unknowns of an older structure,” said Tomoo Fujikawa, architect on the project. Fujikawa is principal and president of the Chicago architectural firm Fujikawa Johnson Gobel, the firm responsible for the design of the 1997 east addition to the original CBOT building.

One key element working in the restorers’ favor was the original 85-year-old floors in traditional sand cushion terrazzo in the CBOT’s historic first-floor lobby.

Its striking art deco pattern of circles, arcs and angles is now restored as the distinctive public face of the building’s interior, its presence expanded and complemented with the addition of a 3/8-inch epoxy terrazzo floor. Indistinguishable from the original floors, the new floor is as opulent as the old classic terrazzo, which in turn still looks as fresh as the new.

“The beauty is that standing there I imagine most people don’t realize it’s new,” reported Fujikawa. “It looks perfectly natural.”

The behind-the-scenes persistence and care that went into integrating today’s materials into the building’s history using today’s construction methods is now evident only in the story of how restorers created the illusion.

As with many of America’s iconic buildings following September 11, 2001, security measures had been integrated into the CBOT lobby. Turnstiles obstructed the pedestrian traffic that used to flow freely through the lobby in all directions. In the latest renovations, the owner wanted to open up the historic lobby to the public again as it had been in the past. So a second floor lobby was created where security could be relocated.

The three-story public space on the first floor was renovated around existing high-rise and low-rise elevator banks with their 1930 terrazzo floors. 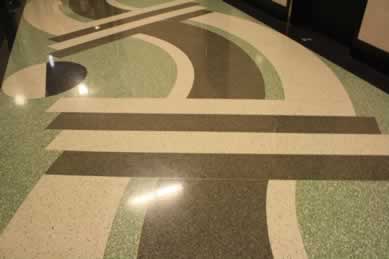 A mid-rise elevator bank that had previously served only for storage was opened for use and the new 3/8-inch epoxy terrazzo in the same pattern was installed. Contractors created a blueprint for the floor using the existing terrazzo as a template, then painstakingly and exactly matched each color.

“We recreated a match,” said terrazzo contractor Carmine Tucci, owner of Amici Terrazzo of Elk Grove Village, Ill. “It’s clean and new, but looks the same as the original.” 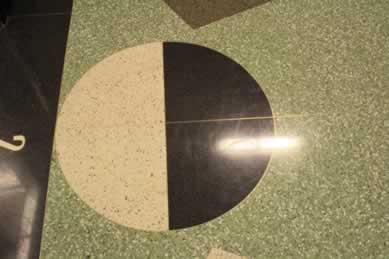 How the Design was Duplicated

The terrazzo contractors’ ability to calculate circles, angles and arcs with field measurements of the existing terrazzo and transfer them onto a blueprint format was instrumental in the success of the installation, Tucci stated. They took the field dimensions and calculated the size, then drew up the design on CAD to submit to the architect. The design fits into the space perfectly.

“I’d have to tear it apart to see how they did it,” he said, noting that the strips may have been pre-bent. With cement terrazzo, the mesh is set, then the lines and strips, then it’s a race against the clock before it solidifies, he explained, but today, an installer has more time to perfect the layout.

Today’s terrazzo contractors are able to achieve higher standards than are evident in historic floors because the materials and equipment have come a long way; today’s installations take one-quarter of the time they used to take, said Tucci, who was trained by his father and uncle has worked with terrazzo for 25 years.

The new second floor lobby had previously been a tenant space, not part of the historic part of the building. A new black-and-white terrazzo pattern was created for the new space so as not to compete with the distinctive floor patterns in the newly renovated three-story lobby space. While less ornate, the second-floor design was influenced by the existing terrazzo; “the colors and lines are a riff on the original pattern,” Fujikawa explained.

The project brought into the building a total of 6,000 square feet of new epoxy terrazzo in five colors. On the precast terrazzo stairs, one color was used on the treads and another on the risers.

In With the New

While the CBOT’s building structure was still solid, the substrate awaiting the installation of the new epoxy terrazzo floor was an archaic fixed floor system of clay tile overlaid with concrete that was showing considerable wear.

Deteriorated from age and from years of the coming and going of many tenants, the substrate for the new terrazzo floor was replete with penetrations, pitting and dips.

The sub-base “had probably 1,500 linear feet of cracks,” Tucci said. The cracks were treated with epoxy membrane and fiberglass mesh to forestall any telegraphing through the terrazzo.

Contractors also used a fill material composed of epoxy and a fine filler sand to bring the elevation of the sub-base to the appropriate level, before the 3/8-inch epoxy terrazzo floor was poured.

A Color Match Made on Earth

“The process of matching the complex historic colors and aggregates with today’s materials was a real challenge,” Tucci reported.

To develop color formulas, contractors began by removing small sections of the historic floor. They brought the pieces back to their workshop and stripped off any wax, sealants or buildup to clearly reveal the true colors. Then began the process of finding a blend of epoxy and aggregates to recreate the colors of the pieces.

Because the original stone aggregates were mined from a quarry over 85 years ago, matches were no longer available as mining has continued. Duplicating the appearance of the original floor required mixing different aggregates to mimic the originals. While beiges and blacks are relatively simple to match, Tucci said, the green tones of the original art deco floor presented a particular challenge. The process of trial-and-error sometimes took 15 to 20 rounds of samples to achieve a ideal match.

“These are natural products harvested from the earth,” Tucci explained. “It’s hard enough even a couple of years later to match stone from a quarry, let alone when this much time has passed. The slight natural variances of terrazzo are actually an asset—no two floors are exactly alike. But getting a perfect match is challenge because you’re dealing with ‘Mother Nature.’”

For a successfully completed project, Fujikawa reported that the entire team worked well together to realize the owner’s vision, with every element playing its role. Behind-the-scenes coordination of parts and pieces brought them all together as a whole, he said.

“Terrazzo played its role well; it was certainly an economical material with lots of flexibility in design and in its ability to match colors and existing designs—in this case, matching old terrazzo with new,” Fujikawa said. “Amici did a wonderful job; we are proud of the design, the client was happy and it was on budget. It’s an example of everything going well.”